The origin of the Domaine Bousquet family travels back to the city of Carcassonne (karkasɔn), located in the southwest of France. With an elevation of 266–820 feet, roots of civilization run deeply here. With extensive remains of medieval fortifications, see the image below. Four generations of Bousquets, the family have been able to traces themselves back to this archaic stronghold… 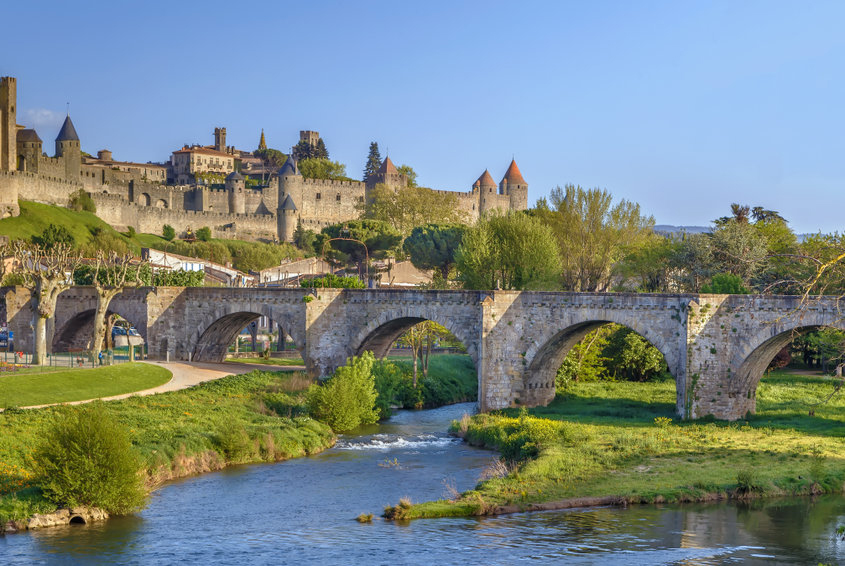 Carcassonne is the town’s, capital of Aude département, Occitanie region, southwestern France, southeast of Toulouse, near the eastward bend of the Aude River. It divides the city into two towns, the Ville Basse and the Cité. The Cité has the finest remains of medieval fortifications in Europe.

On the summit of an isolated hill rearing abruptly on the Aude’s right bank, the site of the Cité was occupied as early as the 5th century bce by the Iberians, then by Gallo-Romans. The inner rampart was built in 485 ce, when Euric I was king of the Visigoths. Clovis failed to take it in 508, though Muslim invaders succeeded in 728, as did Pippin III the Short in 752.

The history of Carcassonne continues with copious details, which you can continue to read, by clicking on the Britannica link above. Let’s just say… the Bousquet family has a great love connected to this ancient city, still, as part of their DNA; all understandable. 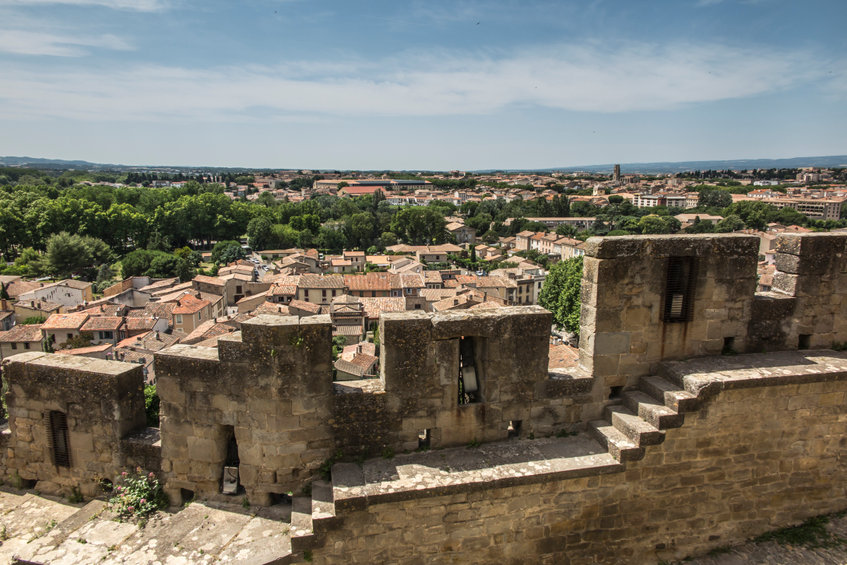 After four generations in the south of France, this Bousquet family relocated into Argentina’s Uco Valley. 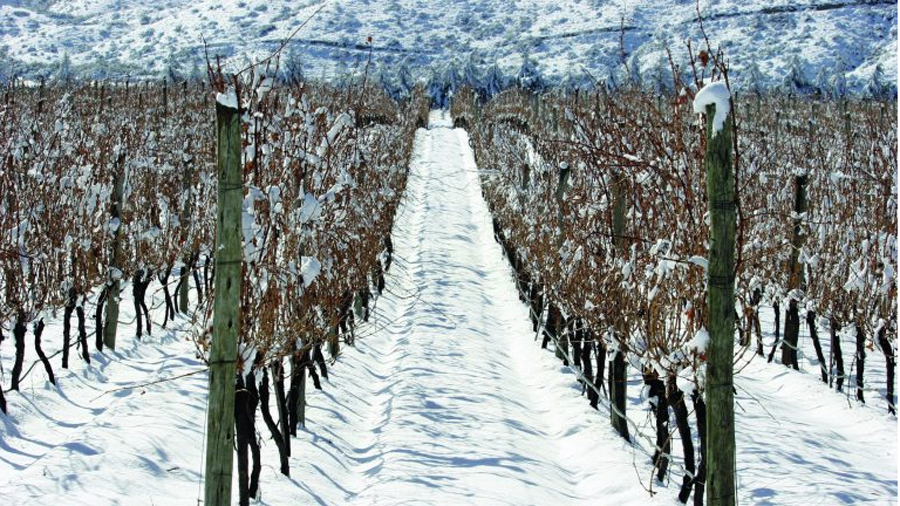 From the South of France’s Mediterranean

to the Mountainous Uco Valley

Four generations of the Bousquet family crafting wine has always been, and still is, the production of wines having a superior quality.

Sidebar: So you don’t have to search, their prices are also really affordable (suggested retail)

Their history led the Bousquets to the Uco Valley, beginning a new family chapter in viticulture and oenology. One can only imagine the learning curve, of their “wagons ho” adventure; although, the process easily went more swiftly. The serious challenge for this kind of move is personally more cultural, not so much viticultural. It didn’t take the family much time – in the grand scheme of things – to get it going on, for their next generation. 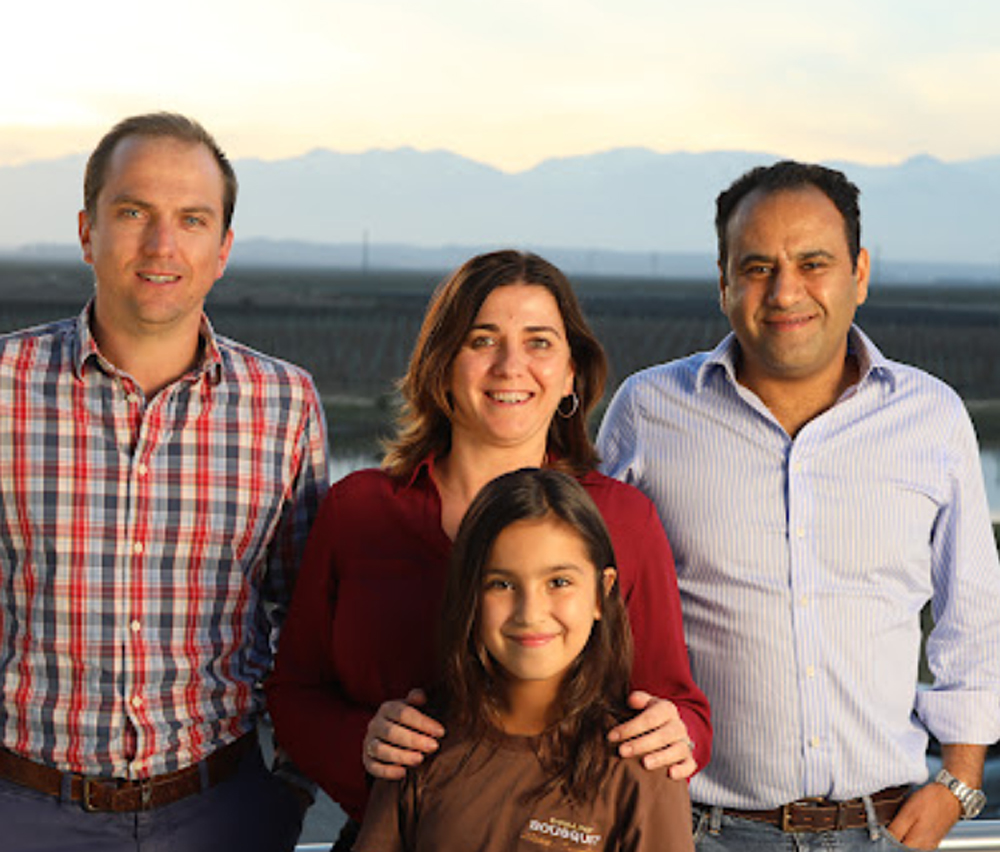 Where to Start & the Pioneer…

For Northern hemisphere wine migrations, it’s a bit easier; but, now it was about the Southern Hemisphere’s compass point. A reset had to happen. With four generations ingrained DNA details, it meant this was going to become an adventure for the crossing the equator. From their website:

“A 1990 vacation in Argentina was all it took. For third-generation [patriarch and pioneer] winemaker Jean Bousquet, it was love at first sight. The object of the Frenchman’s desire: the Gualtallary Valley, a scenic, remote, arid terrain high in the Tupungato [one of the highest peaks in the Andes], of the Uco Valley in Argentina’s Mendoza region, close to the border with Chile. Here, where the condors fly and not a vine in sight, Bousquet discovered his dream terroir, an ideal location in which to nurture organically-grown wines.”

From the terroir’s atmosphere, to soils and the seasonal ranges, to temperatures and grape vines that would have any success… all had to be reconsidered, if there was to be any success at all. This was not established history, as it had been in France since ancient times. There were no prototypes. It all had to be intuition, experimentation, and a boatload of luck, because this was pioneering, baby. 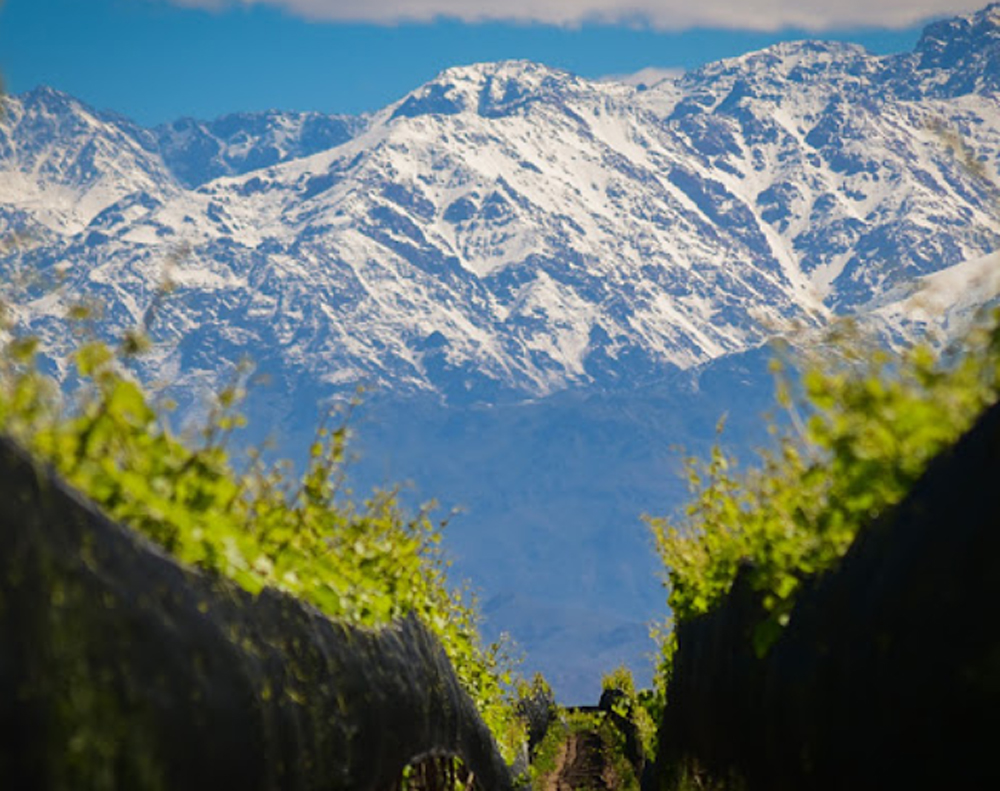 One Step at a Time ~ Terroir

Climate, soil compositions, topography, and microbes all had to be considered.

The photo collage of Franco Bastias is being used, due to a recent ZOOM meeting with him. This image completely and absolutely personifies his energy.

The Uco Valley and its Gualtallary subregion, ranging 4,000-5,250 feet in altitude, are nested within the larger Mendoza appellation in the western reaches of Argentina, abutting the Andes mountains. In spring, winds, called “Zonda” in Mendoza, blow ferociously. The Zonda belong to a category of winds defined as “foehn,” a dry, warm wind that gusts down the slopes on the leeward side of mountains. In South America, moisture-laden winds arrive from the Pacific Ocean, travel east across Chile and over the Andes, coming down on the Argentine side, having lost all their moisture. The intensity of the foehn effect is related to the height of the mountains. In the Uco Valley, the Zonda winds are present longer than elsewhere in Mendoza, from August through October. They are super-dry (almost 0% relative humidity), hot (around 100° F) and strong, with aggressive speeds that can reach up to 150 mph. Later, after the Zonda winds cease, cold winds from the south of Mendoza arrive, producing a rapid decrease in temperature, frequently resulting in frost, further limiting potential yields. What does this mean for viticulture? These winds overlap with sprouting and flowering season (August-October), impacting tiny, sensitive buds and flowers.

Domaine Bousquet: Thanks to the sandy soil, drainage tends to be excellent. Most of the soil surface has low concentrations of organic material due to the elevation and climate, which produces very favorable stress in each of our vines. Grapes develop increased levels of sugar and acidity.  Sandy soils help create wines with elegant profiles. 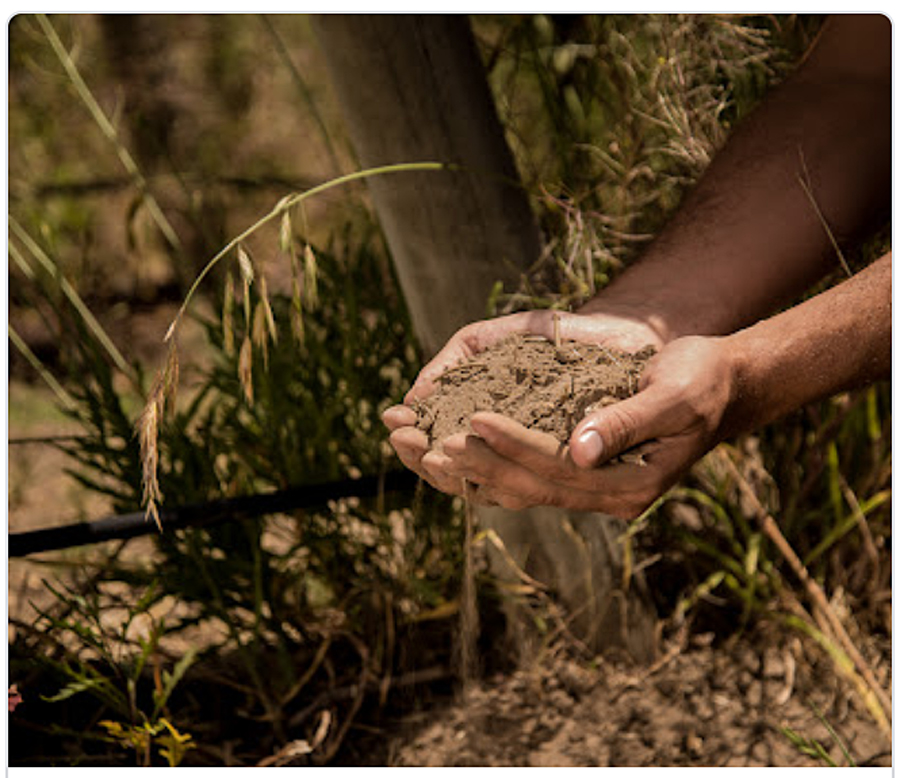 “…the true ‘plant whisperers’ are the workers who tend to the same vines, often for decades.” Soon after arriving at Bousquet, Bastias was stumped as to why, though springtime, Syrah’s canopy was yellowing. Nothing seemed to explain “the disease,” until one of the old hands said: “Don´t worry: The Syrah is just sad because it doesn’t have enough sun. Check back when the sky is clear.” A few sunny days later, the canopy had already started to revert to a healthy green.

Bastias believes that success depends on building a team from the ground up, not top down. “You are only as good as the people in the vineyard. They can make or break you.” He made a point of earning the workers’ respect, leading by example, not words. One time he started pulling leaves and said: “If I can do this in 10 minutes, you, who are in the vineyards all the time, can do it faster!”

Carcassonne, France (Grape phylloxera, an insect related to aphids, devastated French vineyards in the 19th century after the pest accidentally made its way to Europe. The serious risk the insect poses today is under control, thanks to tolerant rootstocks, but phylloxera is ever-present and little-known.)

Uco Valley, Mendoza, Argentina (Although the phylloxera louse can be found in Argentina, it is of an exceptionally weak biotype here that fails to survive long in the soil.) 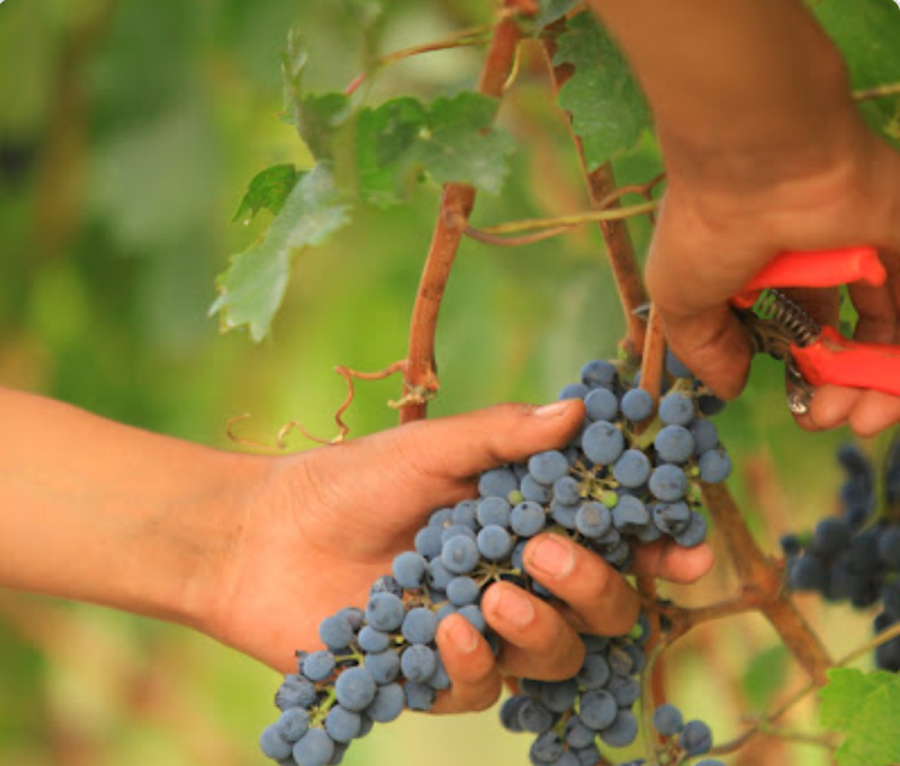 SCIENCE ~ TERROIR ~ FROM THE FAMILY

We are dedicated to farming organically while improving our land’s biodiversity. We believe that the healthier the vineyard, the better the fruit and of course the wine. In other words, by nourishing the land and treating it with respect, we know that the land will give us back its finest fruits.

Organically grown vine roots penetrate deep into the soil where they absorb the trace minerals that help to give our wines their authentic regional taste. For this reason, organically grown grapes can express the purity, intensity and varietal character of the local terroir.