As mentioned in my first story in this series, Chilean Wines that Collectively Underline Chile’s Historic Commitments, I’ve entered into a process of learning right now… So welcome, especially if you’re learning some things, too, about Chile. This story is composed from the following:

This story is about Viña Koyle, a second, in a series of six samples sent to me, about sustainable wineries in Chile; so, we can become more familiar. Viña Koyle is also Biodynamic, for those keeping score. There is a big difference, with this level of certification. They are this dedicated to purity for Mother Nature’s sake. From Wine Folly:

What Does Biodynamic Mean?

The concept behind biodynamics is that everything in the universe is interconnected and gives off a resonance or ‘vibe.’ The interconnectivity of everything even includes celestial bodies like the moon, planets and stars. Biodynamic viticulture is the practice of balancing this resonance between vine, man, earth and stars. Essentially, biodynamics is a holistic view of agriculture.

“Chile! Where sustainability is part of our country’s DNA! Our land is rich in geographic extremes and climatic diversity, but when it comes to sustainability, Chilean winegrowers are one. United in our commitment to protecting the environment and preserving Chile’s precious natural resources. Drink Sustainable. Drink Chile.”

From Wine Lover’s Guide to Alto Colchagua: “While Colchagua is one of Chile’s most prominent wine valleys, Alto Colchagua is still somewhat off the radar. The highest altitude vineyards in Colchagua start from the higher estates of Los Lingues at altitudes of over 300 metres [984.25 feet] and run up to over 1000 metres [3280.84 feet] above sea level in the mountain vineyards. The combination of altitude and mountains makes for great wines and also makes this a great wine region to visit.”

And, from Uncorked ~ The Wine Blog: “With this in mind, Chile is well-endowed for wine, since it has one of the world’s longest coastlines. Areas like Maipo Valley, Valle de Casablanca, San Antonio Valley, Valle de Limari, and Valle de Colchagua enjoy coastal influence and more. The western orientation of many valleys allows the free flow of coastal air into them. In addition, the icy Humboldt current ensures that air is reliably chilly. It’s an unusual geographical boon for wine growing so close to the equator.”

When I first visited Viña Koyle’s Website, I immediately fell in love seeing these sheep in the vineyard image that flashed by on their home page. These are my kind of people… Shepherds of the earth… people still connected to it and understanding how all of humanity works. Biology 101: Chemicals for soil enrichment come from Mother Nature’s nitrogenous waste, not from a box that smell like a mad scientist’s laboratory. Once I met a vineyard manager, who was touting the benefits of Round Up. He said, “It’s so safe I could drink it right now.” I said “do it.” He just chuckled, like it was some laughing matter. That told me all I needed to know about his thoughts, and ultimately his wine.

This image of sustainability is of the most natural kind. It wasn’t until my first trip into Europe, touring the Alentejo region of Portugal, that I first saw sheep just hanging out in a vineyard… munching on grass, while leaving a bit of animal nitrogen behind to enrich the soil. It was one of those “Well, yeah!” moments. The European and Chilean viticulturists are not as anxious as Americans have been to reach for chemical compounds, when nature has already delivered the goods in a conveniently homeopathic way. What a joy; the companionship pairing of vines and sheep. With Chile having European roots, it makes perfect sense that their own sensibilities are still connected to their DNA’s sensitivities. You can take the man out of Europe, but you can’t take Europe out of the man. 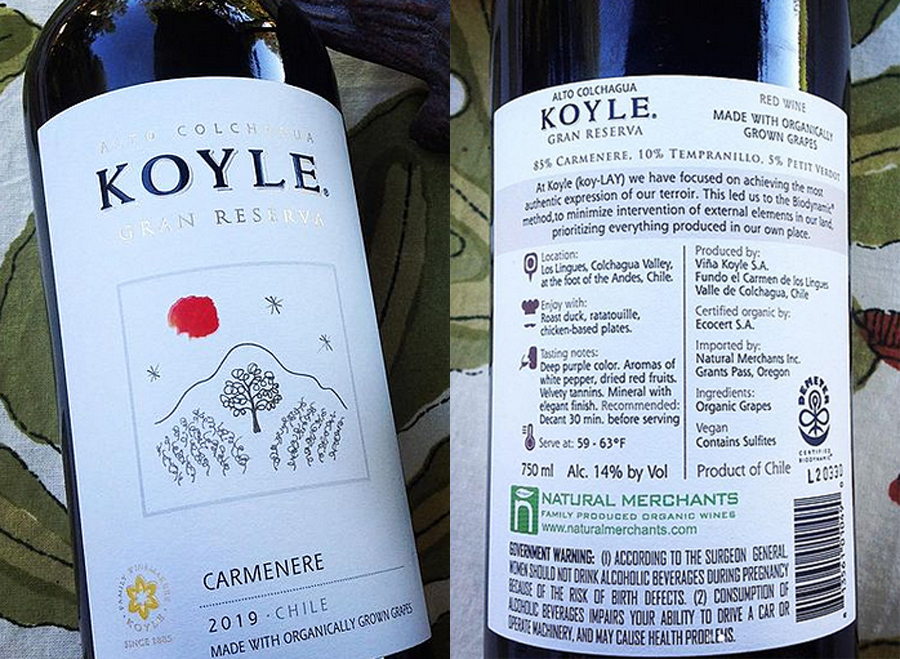 The Viña Koyle was the second wine I taste, of those pictured above. It’s one of the signature, red wine grapes for Chile and I wanted to enjoy it. I’ve definitely had my share of Chilean wines, so it was going to be great to taste that part of Chile again. It did not disappoint. In fact, when my son-in-law tasted it, he asked if it go poolside, because that was where he was headed. Nodding “yes,” I just followed him to the pool, glasses in hand. I had already evaluated the Vina Koyle Carménère’s deliciously bold, wine flavors. If you’ve never enjoyed a Carmenere, it’s known for tasting like a tart raspberry sauce, having green peppery notes, and a delightful finish of minerality. The Viña Koyle is a classic example. This wine delivered all of that on a warm July, sunny day, in Sonoma County California. (The “wine life” continues to amaze me, so so many years later. And it’s delivered the world in each bottle of geography. That’s what wine does.)

So, Carménère, it’s one of the red, Bordeaux wine grape varieties; it can be said that these varieties, now located in Chile, were originally imported to their new, suitable climate. The vineyards in Chile were originally from the vineyards of Bordeaux; yet, they’re very much at home in Chile. It’s also a late ripening grape, like Cabernet Sauvignon, Cab Franc, and Petite Sirah. The terroir is just ideal. 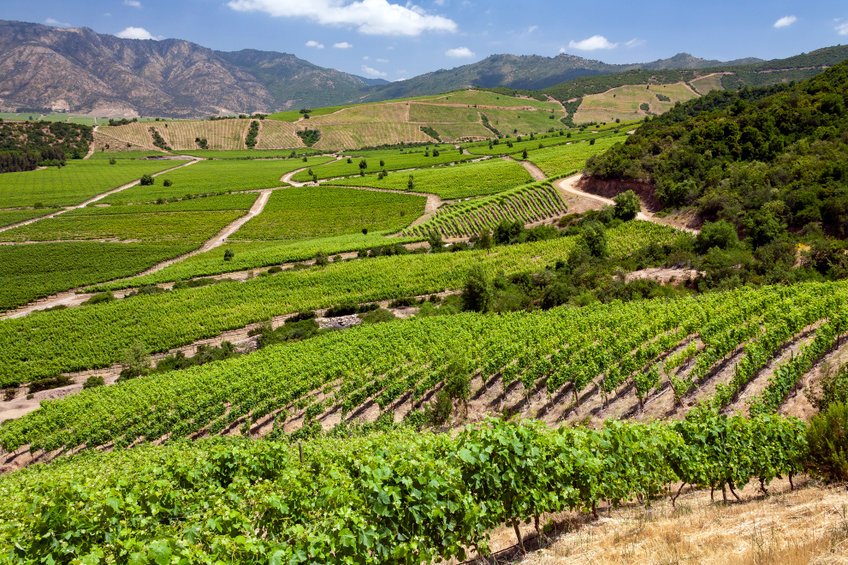 From their Website: Viña Koyle was born from a tradition that runs in our blood: we are a family dedicated to wine for more than six generations, since Don Francisco Undurraga Vicuña began, in 1885. We are dedicated to making wines with identity, from vineyards planted on the rocky slopes of Los Lingues, in Alto Colchagua, at the foot of the Andes mountain range.

Our philosophy is based on respecting origin, and we are guided by biodynamic practices. In our winery we make wines that emphasise the excellence of our terroir, using our family’s experience and innovative winemaking techniques as tools to help us.

Going into Hacienda Los Lingues® is like going back in time. It is not only a typical house of the Chilean countryside, but a living testimony of what was the time of the Colony. Everything remains as it was: the buildings are made of mud and straw; the walls are painted in colonial red and each remodeling is done by historians to preserve the original architecture.

The origins of the Hacienda date back to the end of the 16th century. At that time, he settled in the Valley of Santiago, Don Melchor Jufré del Águila, Hidalgo Extremadura, son of a knight of the Military Order of Santiago, who served as Mayor of the capital in 1599. As a writer and successful chronicler, It gained prestige in the Santiago society and was graced by the King of Spain with the Estancia de la Angostura, located in the Central Valley.

The employer’s houses occupy an area of ​​more than five thousand square meters. Many of its jewels are still preserved: ornaments, fine silverware, glassware, game tables, lamps. Each object has its history: some belonged to illustrious figures of Chilean life such as Mateo de Toro and Zambrano, Conde de la Conquista, who presided over the First Government Junta; there are memories of Gaspar Marín; José Gregorio Argomedo; Ramón Freire and José Victorino Lastarria, among others. It highlights a Florentine Christ of the seventeenth century, made in ivory with 72 cm. high, which belonged to Pope Pius IX, who today is in the Chapel of the Treasury.

No words necessary in this YouTube video… Once watched, you’ll feel like you were just there. The best way to write a winery’s story is to be there. The second best is to watch a video… But, we can change that into our first, if we watch with a bottle of their wine… You’ll taste the difference between the two experiences. I came away from the video still wanting to be that vaquera of my childhood! Dream it, become it. I can hardly wait! I think it’s time to buy that cowgirl hat that Santa never delivered. Maybe I’ve now been good enough.