Kevin Zraly is an extraordinary, wine educator I’ve long admired. Getting to know him over the years has taught me how extremely knowledgeable he truly is.  It was delightful finally meeting him in Tuscany, at Castello di Meleto, a few years ago. He was on a book tour with his latest edition of Windows on The World; and I was on a professional, Italian wine tour with Michael Yurch of the Bluest Sky Group. At the time, we were all visiting and dining at the Castello.

If you really want to know how great someone is, trust a credible source within the person’s own industry. To that end, from wine writer Michael Apstein, of The Boston Globe: “Zraly is the most talented, effective and entertaining wine teacher I have met.”

In 1970, Kevin began working at ­­The DePuy Canal House in High Falls, New York, helping the restaurant earn an unprecedented four-star review from Craig Claiborne of The New York Times.  The next year, Kevin taught his first wine class – “Wine & Cheese 101.”  In 1972, Kevin hitchhiked to California to visit all of the state’s wineries…all 24 of them!  Shortly thereafter, he convinced the administration of his state college to offer their first accredited wine course, “Wine History, Types & Production,” which he taught to the college seniors, while he himself was still a junior.  Following his graduation, Kevin traveled to every major wine region in France, Italy, Spain, Portugal and Germany taking in as much wine knowledge as possible.  In April of 1976, famed restaurateur Joe Baum hired Kevin [at the age of 25] to “Create the biggest and best wine list New York has ever seen, and don’t worry about how much it costs!” for Windows of the World, located on the 106th and 107th floors of New York City’s World Trade Center.  Kevin rose to the challenge…

… by being the founder and educator at Windows of the World Wine School, until September 11, 2001. Kevin was certainly devastated with the loss of so many of his colleagues and friends. It took time and space to recover and rethink. Since it had always been about wine, Kevin got busy with another edition of Windows on the World. There are 35 editions to date and over 4-million copies have been sold. Each one is filled with more of his learning and tasting. I have many copies of his books. It’s become quite the collection for anyone who has followed his career.

And so… today… it would make sense in this Covid environment classes have moved to also being on line (besides YouTube). We all now have the opportunity to study with Kevin’s gifted guidance, in the comfort of our own homes. Imagine… His next class is May 3, focusing on wines from Spain. His following class in this series is going to be on May 10: “One Hour Bordeaux Wine Expert.”  Same sign-up page. For FULL DETAILS, see below.

Kevin’s website: Whether you’re a casual wine drinker, a budding connoisseur, or a master collector, wine expert… educator and entertainer Kevin Zraly has a virtual class that fits!

If you want to learn, Kevin Zraly is ready to teach! This is a link to his calendar

And, this YouTube video gives you a great snap shop of Kevin Zraly’s personality and wine acumen. Very fun, funny, and extremely informative. And, keep it to affordable, says Kevin.

Live with Kelly and Ryan

And, his focused books: 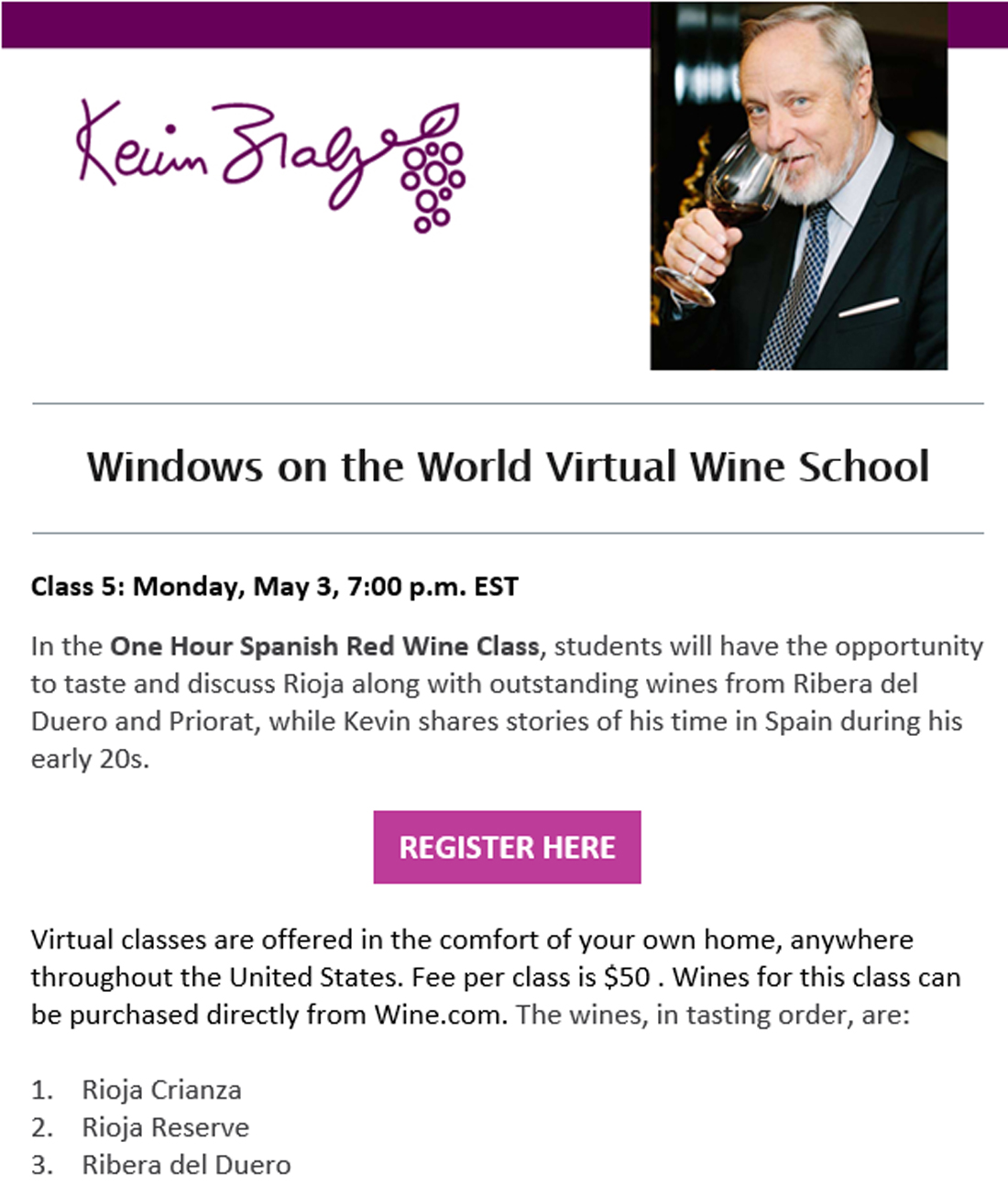