Global Climate is Shifting: UC Davis Discussion Invites You to Understand the Impact on Grape Growing

One of the best places in California for studying and scientifically understanding the wine industry is UC Davis. I’m not sure when you realized that global warming was a true warning. I heard it in the 60s and began to do my part. It’s been a somewhat lonely road, quite honestly, but I am thankful that a few of us took t seriously. It’s hard to even imagine the pile of crap I would have created, had I not stopped buying cans with chlorofluorocarbons, recycled everything and anything that’s plastic (paper bags line my garbage and recycling containers), heck – I’ve even found bamboo TP.  Then, there was an entire school I trained not to leave school and leave their garbage on our front lawn, with a “Give a Hoot; Don’t Pollute” campaign. It worked not only for those students, but the concept was handed down to all the next generations. (I know, because we lived at that house for 17 years, and never had to bend over again.)

And, here we are, icecaps melting, and the population of the world has doubled since the 60s… doubled! And, I have a nine-year-old grandson I’m home-schooling. We’re deeply engrossed in the Netflix series “Our World.” It’s a great dose of Flora, Fauna, and how he can also help by adapting his life to the changes of our planet. The power of one is one. The power of each successive number is squared…

So… UC Davis for you and yours in viticulture and enology… 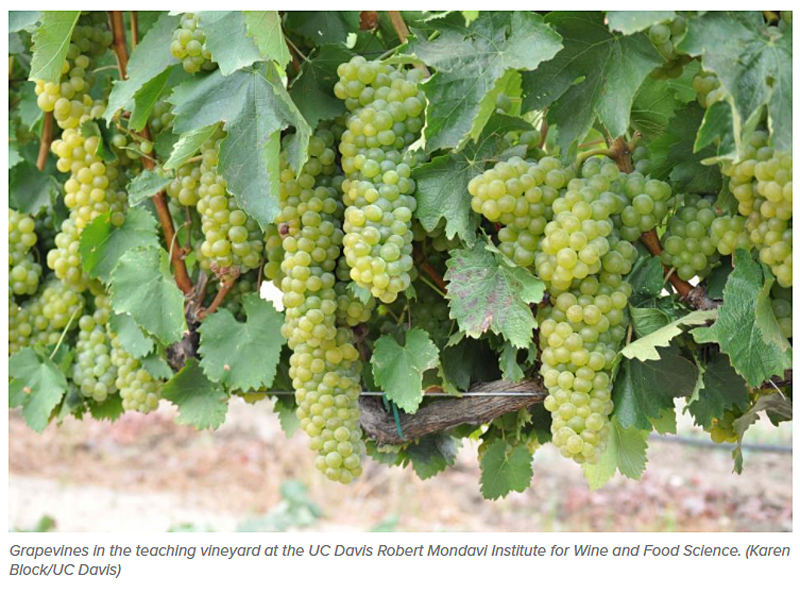 By Jessica Nusbaum on October 30, 2020, in Environment

The impact of climate change on the ability of California’s premier wine regions to grow grape varieties like chardonnay and cabernet sauvignon, and the need to plan — and plant — for the future, will be the topic of a public online panel discussion hosted by the University of California, Davis, at 6 p.m. on Tuesday, Nov. 10.

The panel will include Esther Mobley, who writes about wine for the San Francisco Chronicle and has covered the effects of climate change on the Napa Valley; Dan Petroski, winemaker for Larkmead Vineyards, who is at the forefront of the discussion about the need for Napa Valley winemakers to identify solutions to rising temperatures; and UC Davis Assistant Professor Elisabeth Forrestel, who researches how wild and cultivated grapevines adapt to drought and heat stress.

Petroski and Forrestel will both also share their experiences on the ground. Forrestel has started an international initiative focused on the adaptation of vineyards to changing climates, with initial plantings of cultivars with wine-making potential under warmer and drier conditions already underway in Napa and Davis. Petroski planted a new experimental vineyard at Larkmead last year to test grape varieties from the Southern Hemisphere and the southern Mediterranean.

The public is invited to join the Zoom discussion; register by 3:00 p.m., November 10, 2020, to receive the link. The hourlong lecture will include a question-and-answer session with the audience.

The discussion is part of the Savor series, which explores some of the biggest food and beverage topics being studied today at UC Davis. The series is presented by the Robert Mondavi Institute for Wine and Food Science and the UC Davis Library, which has been called the greatest wine library in the world.