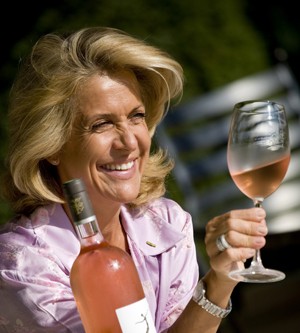 Starting at the top, I don’t have to watch A Good Year. It’s a personal favorite. I believe I’ve already watched it at least 20 times. It’s my “go to, gotta get back to the garden” movie. It’s about the tonal colors – blues and grays when in the city of London, pale yellows and green when in the countryside of Provence. There’s something to be said for dreaming it, and then becoming it. Last July, after having watched it (and purchasing a copy), I got to go to Provence. It was everything I had hoped it would be and a lot more. I was a guest of Valérie Rousselle and son Adrien Riboud, proprietors of Château Roubine Cru Classé. My follow-up story is called “When enjoying a Glass of Wine from Provence Involves a History Lesson of the Middle Ages.” Here, I was so comfortable, so thrilled to be there. I was living the dream, thanks to the generosity of Valérie and Adrien.

So, I jumped down to the next movie. Might as well go in alphabetical order, right? A Heavenly Vintage ~ In 19th Century France, a peasant winemaker endeavors to create the perfect vintage. This one is very dark. It’s the yang to the yin of A Good Year.

It demonstrates the passions of those (in the wine business, we all know at least one of this type of ambitious winemaker) who dedicates him or herself to creating “the” perfect wine. Set in the period of 19th century France, character Sobran Jodeau is a peasant winemaker, versus being someone who has inherited his craft from centuries of land ownership. The story has him dedicating himself into creating a perfect vintage. This is his driving force, as he also works on balancing three loves:

Sobran grapples with the love of all three, against all odds, and then throw in a bit of Phylloxera. It is never brought up as such, but when you see those vines, just know that this was their devastating parallel to the pandemic of our time. Phyloloxera is a tiny louse that sucks the life out of a vine. France’s wine business all but perished in the late 1800s, after some native vines from the United States were brought to France.

FROM WIKI: Phylloxera was introduced to Europe when avid botanists in Victorian England collected specimens of American vines in the 1850s. Because Phylloxera is native to North America, the native grape species are at least partially resistant. … The problem spread rapidly across the continent. (There are differing opinions of how it got there, but the main point is that it did.)

This movie is captivating, and demonstrates what France was like in the late 1800s. And, it made me more appreciative for our own times, because we have a better life to begin with, by being kept up-to-date of our own problems.

Does he create that heavenly vintage? You decide.