When Wine Spectator rises to the top again, you know the cycle is over

In 2004, as a wine publicist, I had heard rumblings about an Alder Yarrow. It seems he had a wine blog called Vinography. I had heard about Web 2.0, and this guy was doing it. Hum, I’ll have to check this out.

When Web 2.0 was being created, I was in the middle of an enrichment, business class at Santa Rosa Junior College. Web 2.0 was brought up, and we were all soon going to be enjoying an interactive Web. What that meant at the time was still pretty mysterious. It didn’t take long to find out, though; and when I saw fellow wine publicist Tom Wark launch Fermentation I though, Hum, I’ll have to check this out.

He was the first wine publicist in the world I knew of, to do this? Can I do that, too? I had to think about it. I knew it was going to be a precarious, bumpy ride, being the first female publicist in the world to ride two horses with one behind and not shying away from being on the edge. I dove in; time to tell some interesting backstories. Cyril Penn (Wine Business Magazine editor) referred to my stories as “Musings,” when he listed his first blog resources, on his daily newsletters.

So, off we all went, followed by every millennial who loved both wine and writing, and they wanted to save the world from well-established media types. What a mess it became. Staying out of it was an opportunity to get to know the players, instead. The first Wine Media Conference (originally called the Wine Bloggers Conference) allowed for the introduction. It began mostly was mostly a guy thing, simply wanting to knock the big dogs off the mountain top.

SAMPLES FLYING OUT THE DOOR ~ Summer ~ The Heat was on

Meanwhile, wineries, including my clients, were thrilled to have new avenues to get their wines reviewed. The most prolific writers began to not see their floors anymore, as the samples piled in. I didn’t mind reviewing other wines, too, besides my insider story musings… But, I never advocated for client wines, the same way bloggers did. I was busy creating their technical datasheets. Conflict of interest? If they were my clients, there was a level of my endorsements, right? I just mused on, continuing with wine business subjects.

HOW DO WE MONETIZE OUR WINE BLOGS ~ Fall, duking it out

At the first and second wine bloggers conference, everyone was still struggling with “How can we monetize our blogs?” The answer for me was simple, but not for most of them. “If you want to monetize your wine blog, get a job in the wine business,” I said.” They didn’t seem to like that answer. Then after a few years, some of the women – interestingly – were the ones to take the advice. While their blogs suffered for the steep learning curve they went on, their love of wine and the business blossomed. And, good for them! My job in that regard was satisfying, and I had picked up a Portuguese client in the process. I, too, expanded greatly.

As time went on, many of us developed exchange links. By the time mine grew to a very long list of 84 (for then), my interest in writing on my blog had shifted. Recently, I thought, “I need to clean up that list because many of them are probably gone.” And, I know that broken links can also hurt search engine optimization; both outbound and inbound. It just became time. I’ve had my blog since the end of 2005. I just thought I have to cut through the jungle of wine blog links and got busy. The numbers are fascinating, so were the names people had taken on, as each person had his/her own raison d’être. Mine was to tell the backstories, theirs was to create their own unique perspectives. Today, I was reminded of that, as I searched for their current status. The numbers:

From the “Blogs ~ Domestic ~ Shared” category, there were 85 wine blog links: 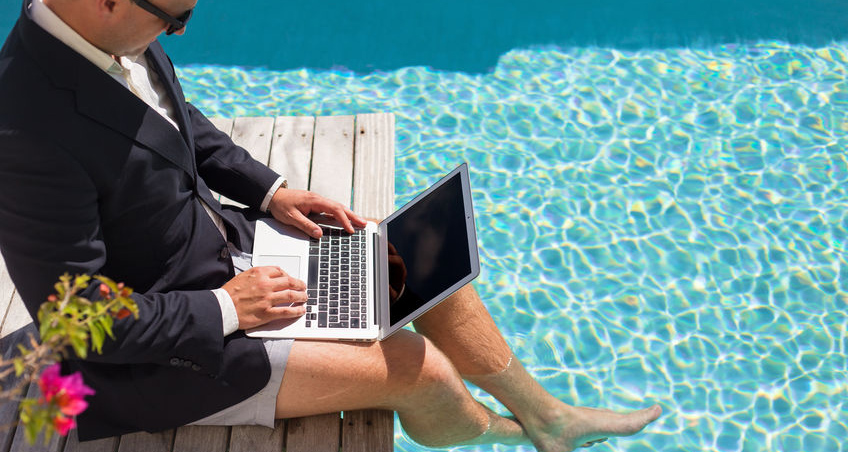 While both wine bloggers and established wine writers were dealing with the new normal, writers ~ most especially those with established wine careers ~ were in a bit of a quandary, under the weight of now so many options outsiders had. They weren’t in the closet, but in some ways, they had been sent to their rooms, in light of the new darlings. Wine magazines were going through a bit of subscription denial – which would have been progressing, if there weren’t so many new potential subscribers, now becoming dependent upon “How did that taste, my new influencer?”

Once one established writer decided, “Well, I’ll just have a blog, too,” most every one of them was on his or her way with their own blogs, on their already established wine Website. 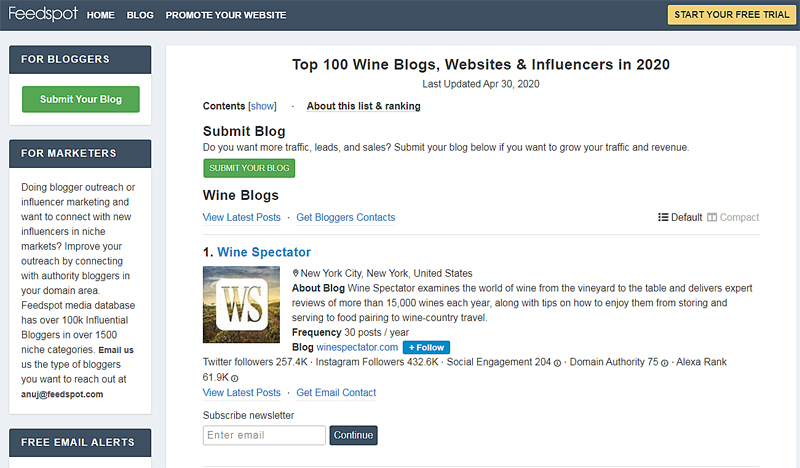 A combination of wine bloggers and wine magazine personalities 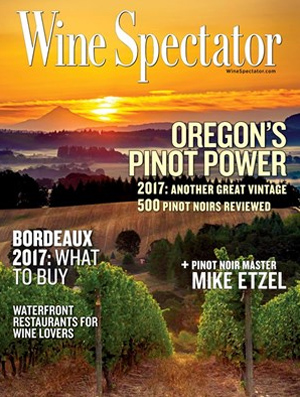 The definition of wine blog has evolved from self-publishing, to now include magazines with paid staff members sharing informal thoughts. The fan base for them had already been established, they’re content-rich, and written really well, with professionals at the keyboard. So, it’s no surprise to me that the number one seat for years used to be Alder Yarrow’s spot, from Vinography, and is now taken by Wine Spectator. No offense to Alder, either. He just doesn’t have the staff of publisher Marvin Shanken. Now, the very thing that wine bloggers wanted to topple (and this NEVER included Alder Yarrow, I need to add) were major publishers: Robert Parker, Wine Spectator, Wine Enthusiast, and Wine & Spirits magazines. Today, Vinography is still at the top, but a bit further down the line on the Top 100 list, because of that staff thing.

It’s now completely integrated, and I knew this the instant I saw the following “Top 100” list.  Numero Uno is yup… Wine Spectator. And good on them. Publisher Marvin Shanken is a great guy, who’s stood the test of time, and is a darn good wine education philanthropist. He’s all pro and there you go.