This intro is for five wines tasted in a series. If you want to just skip to the wine, scroll down for ” Umani Ronchi Vellodoro Pecorino.”

Winter white wines are so scrumptious, with not only dense foods, but also with lighter foods. I don’t think of them so much as seasonal, anymore; i.e., “I only drink red wines in winter and white wines in summer.” That’s as passé as “one can’t wear white after Labor Day.” (Although, my mother is still turning in her grave, on this one…) 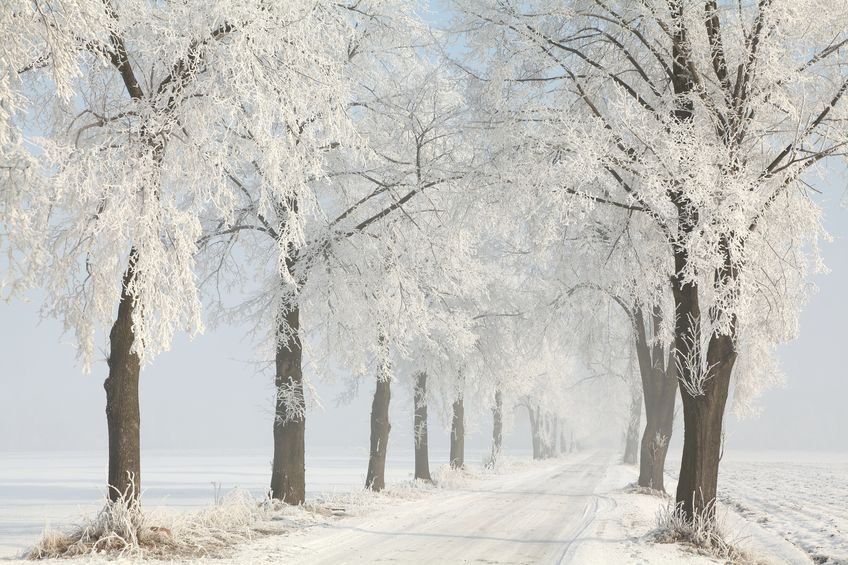 Our American society is finally becoming more sophisticated with wine. We’re beginning to realize that wine is an everyday beverage, and many of us are buying into the lifestyle. The more we travel to wine regions, the more we broaden our horizons and the expansion of our taste buds. Many of us have also found our own palates. We’re depending more and more, in this process of deciding what works best for us, and then forging our own memories.

Other opinions are great; we can learn from them. Ultimately, though, it’s on each of us to figure out what works best for our own taste buds. You might find a reviewer whose palate is very close to yours, then you’ve got a consultant.

I love bringing in regionalities, for instance. We connect more to the wines, with more knowledge… Regions are triggers for more enjoyment, on so many levels. This all goes beyond swirl, sniff, and down the hatch. It takes us to somewhere new. The experience I had with the Tablas Creek wine I’ll also be reviewing, for instance… one swirl, sniff, and taste…

I had just been tasting through some import wines. When I tasted one of them, I immediately knew it Californian. I’ve been blessed to have more than my share of California wines. I’ve also stepped outside of the US and gone into other wine regions of the world. Over time, I’m learning the differences. Each terroir is markedly unique. This, in turn, has more than the land determining flavors. It also has to do with practices, the people and their beliefs, and training; but, if I had been blindfolded during this tasting, and asked what location, I’d have said California, in a California second.

The following samples of white wines have arrived. Brands listed below are all unique, and have intriguing flavors in their own right. Flavors, balance, textures were right there for each wine.

While I’ve been a guest of the Castello di Meleto in Gaiole, Tuscany, driven through Umbria, and also been a guest of Colonnara | Viticultori in  Cupramontana, in the Marche region of Italy (including a day trip to Senigallia on the Adriatic Sea), I didn’t take most of these pictures in this story. I appreciate the geography so much, and I love finding exceptional images to share with you. It’s all about terroir, and a photo does tell a thousand words. This is a refresher course for me, too, as I read about another winery’s story. Perhaps I can bring more Italian flavor to this story, having my Italian passion reignited. 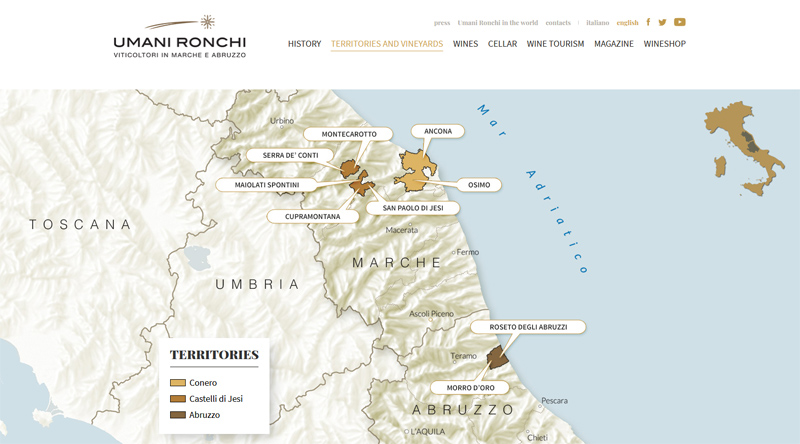 Umani Ronchi are wine producers in Marche and Abruzzo.

“The Umani Ronchi story is one of ancient vines, land and people. Seasons waxing and waning. Harvests changing. Wines coming into being. The story began more than half a century ago at Cupramontana, in the heart of Verdicchio Classico country, and has spread further. Today Umani Ronchi is the wine estate owned by the Bianchi-Bernetti family, who since 1957 have been making superb-quality craft wines, coaxing the best out of the Verdicchio and Montepulciano that find their finest expression in Marche and Abruzzo.”

All regions of Europe had the Romans conquer them and then rule over them, from  27 BCE to the First Century BC. The grape growing and winemaking influences of the ancient Romans and Etruscans into Tuscany? Yeah, they brought and they taught winegrowing and winemaking. Roots in Europe are very deep. Histories are rich and Umani Ronchi rightly feel that history.

From the Encyclopedia Britannica:

“The building of an enormous empire was Rome’s greatest achievement. Held together by the military power of one city, in the 2nd century CE the Roman Empire extended throughout northern Africa and western Asia; in Europe it covered all the Mediterranean countries, Spain, Gaul, and southern Britain. This vast region, united under a single authority and a single political and social organization, enjoyed a long period of peaceful development.” 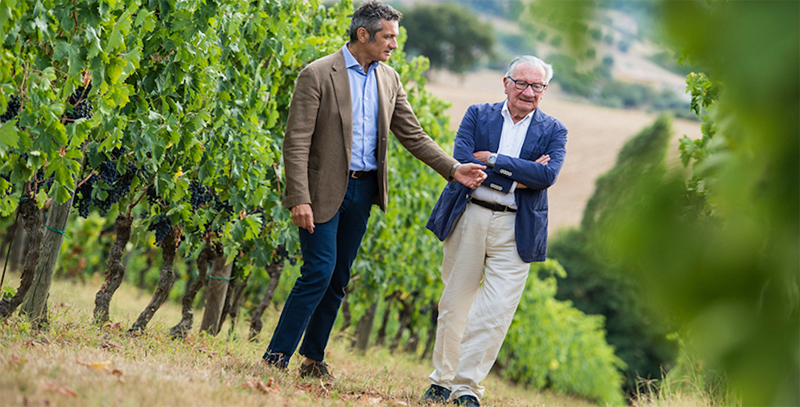 [PHOTO from the Website. Left to right: Michele Bernetti is managing the winery, while father Massimo Bernetti is acting chair.]

For starters: The Pecorino grape variety, also known as “grape of the sheep,” comes from the strong connection between sheep farming and agriculture. This grape variety grows in the areas of shepherds’ actions of moving livestock from one grazing area to another. In a seasonal cycles, this typically happens to lowlands in winter and highlands in summer. 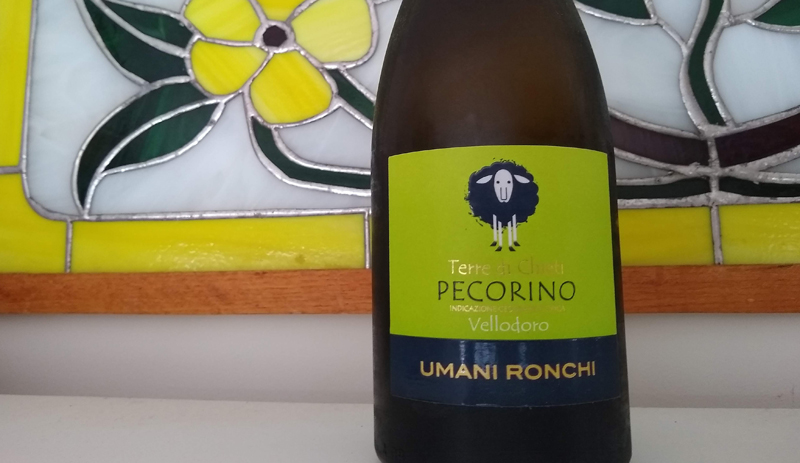 We tasted the 2018 Umani Ronchi Vellodoro Pecorino and it was such a delicious wine, so reflective of its terroir. It has a Mediterranean smoothness, which is really clean, with a full, lush lingering finish.

And, “vellodoro” Pecorino grape variety, also known as “grape of the sheeps”,

Pecorino is an unusual grape to find in the US. Go the extra mile to find it. This Umani Ronchi Vellodoro Pecorino is a classic example of flavor, quality, and a sustainable wine being produced today.

The adorable lamb on the label speaks to its sustainability. The minerals, including salinity, were really well balanced, and the flavor that dominated for me, first off. Its heartiness is in balanced with its flora and fauna in this region. It’s a real treat.

An experience unlike our usual, safe and sound white varieties, when you step outside of our usual boundaries, you may discover gold. This is one of those golden moment wines… as delicious as its locations, along the Adriatic Sea. 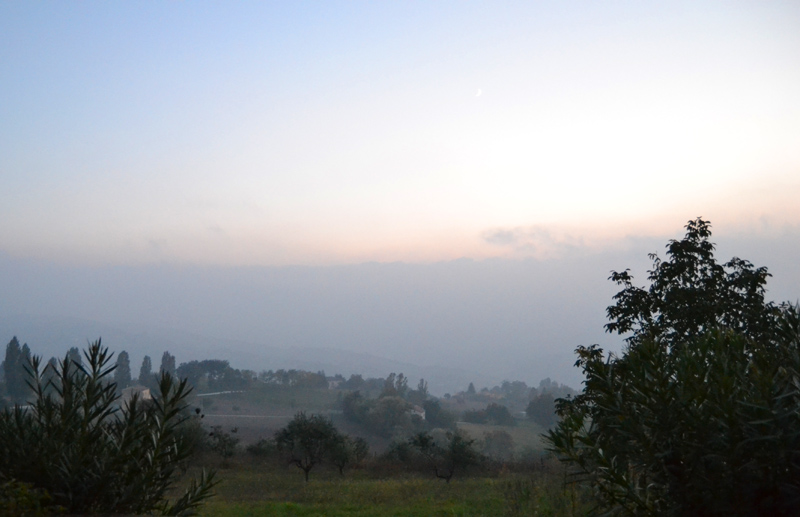 [The density of the fog in this image that I took while there, was made possible by my being in the mountains, above the fog line.]

The Pecorino variety is grown in cooler climates. In Italy, the origin of these wines comes from the Marche, Abruzzo, Tuscany, Umbria, and Lazio regions, with Adriatic Sea influences… In this wine’s case, Abruzzo is its pedigree. It’s a yellow-white grape – why it’s one of my Winter Wonderland Whites.

Soils are mainly composed of fluvial and lacustrine sediments.

In the US, it’s an unusual variety. In Italy, however, it grows in the very specific eastern, coastal regions… The Adriatic Sea has powerful influences. The fog is a bit overwhelming, as it hangs on for dear life, in Italian valleys of the Apennine Mountains. For flavors, think Alpine flowers: Jasmine and scents of the acacia bush, which are clean, pure, and a classic honey flavor. 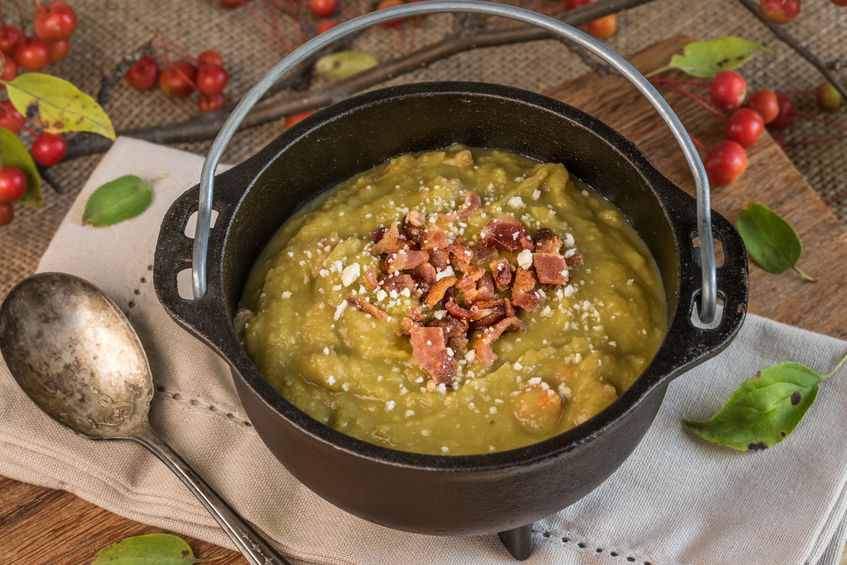 The label makes me think of a warming, thick pea soup with white beans. The acidity of the Pecorino, and yes, the color of the label, are also very suggestive. It seems like a night with the fireplace burning one more log, one more teaspoon, one more sip.

#SAMPLES: Vineyard Brands has brought us the following wines, including this one… with the exception of the upcoming Nik Weis, brought to us by H.B. Wine Merchants.

Next will be Tablas Creek Vineyard Esprit de Tablas Blanc 2017