STORY ABOUT THIS INCREDIBLE LABEL

This wine business began with balance ~ The balance of science and art. If wine isn’t in balance, it’s undrinkable. Precision is necessary on both fronts, though. Not just for the sake of a complete package, but also for tempting someone to trust the package as being enjoyable. So, it’s not just about the wine, but also about the art that tempts one to choose that particular bottle of wine art.

Within the wine world, there are those who make wine and some who advocate for it…

Think Provence, where Rosé wines are a natural fit. Over 60 percent of the region’s production is Rosé. In the… which came first category of “the chicken or the egg…” in this instance, which came first “the wine or the design?”

When someone already has the wine, and comes upon art naturally existing, being inspired sets the stage for a visionary.

Valérie Rousselle is one of those people whose come into my world… the proprietor of Château Roubine Cru Classé. 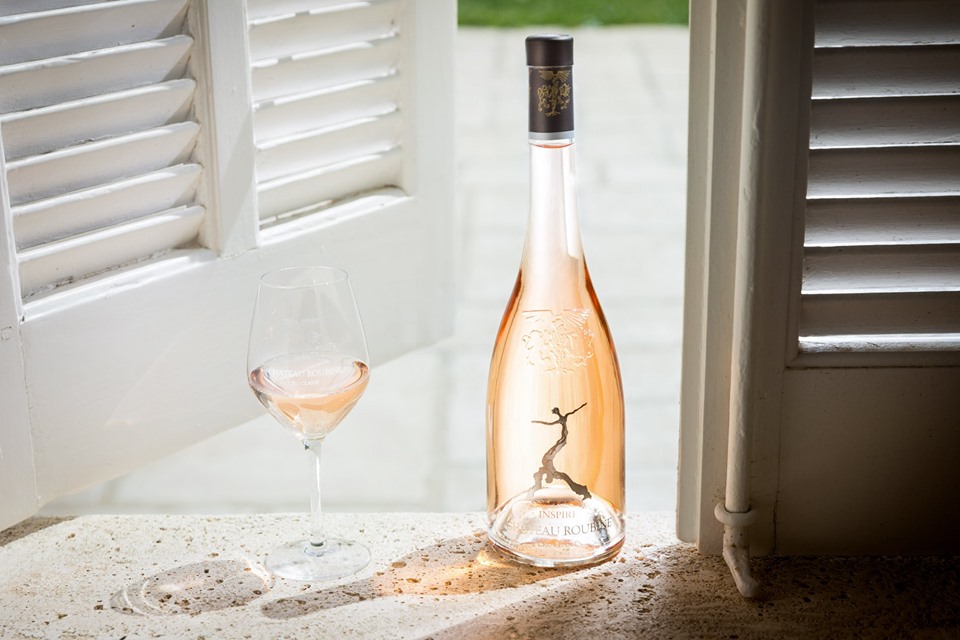 One day, while in her vineyard, Valérie spotted a small, dead vine. She did what any great landowner would do, she pulled the relic from the earth. Upon examining it, though, which included turning it upside down, she could see so much more than a dead vine, with straggly roots… From the scraggly silhouette came elegantly dancing humanity, with the roots delicately reaching with outstretched arms as the dancer, and the vine being its dancing heavy legs, to be prepared to balance the oncoming’s summer fruit… Inverted, yin yang, a perfect revelation.

The vine didn’t make it to a landfill or a burn pile, of course. Art exists in all of nature, be it ever so humble, or a relic still existing from a great master, hanging in The Louvre. From her vision, this joyful dancer made its way into the hands of accomplished artists.

First, to make it a lasting statue, I believe by bronzing and mounting it. (I should have felt the metal, when it was shown to me, but I didn’t want touch it. I’ve been to too many museums, so as a habit, I don’t touch.)

Next, it went to a creative department, for sketching. Then to a bottle company for its silkscreen design. (Valérie could give you yet more steps, but they’re not really necessary for the “short” version.)

Finally, to her winemaking team to come up with a perfect blend of Rose, befitting this very special wine, which would then go into this inspired bottle.

Its name? Inspire (of course – wink)

The essence of the story was told to me by Valérie’s son Adrien Riboud… The rest I could just feel.

This story to my friend Cathy Champaine, who just came back into my life. Cheers and Clink!