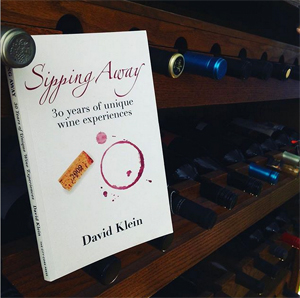 This has been a long time coming, as I got Sipping Away, 30 Years of Unique Wine Experiences, by David Klein, just before I traveled to France. I took the book with me and read in flight. I was headed to Beaujolais, and all of a sudden I was reading about it… that the winemakers of Beaujolais are extremely serious and make complex and nuanced wines… the Crus of Beaujolais – all in regions where I was headed: Morgon, Fleurie, Brouilly, Moulin-A-Vent. What a coincidence.

Also, what a delight to read someone else’s journey, with many parallels to my own, but in a really differing segment of wine.

This is a story of a Jewish Italian gentleman, who grew up in New York City, and that’s an important lead into his part of the world of fine wine.

At first, I thought I’d be reading about wines he had tasted over the years and the experiences that went with them… including reviews.

This book is so NOT that

When anyone gets into the wine industry as a professional, it’s a faster track to the world of wine knowledge. And, it’s done through so many different channels, with so many different nuances.  It just depends on the segment that’s your calling. For David, it was to help his father in a liquor store he purchased. When you read the book, you’ll discover how that came about. His father wasn’t born into owning a liquor store, and his son growing up would never have imagined finding himself on Toitty Toid and Toid.  (Neither would have my sister, growing up in Maine, but their paths easily crossed, as she lived on the corner of 33rd and 3rd… and would have purchased wine in that store from David, without a doubt… They were both on that corner at the same time. A wild coincidence, as I was reading, really.

At first, David was just stocking shelves, but the moment he became curious about what was inside a bottle he was holding in his hand, was like an Alice in Wonderland moment.

I’m going to let you learn the rest of his remarkable adventures, and there are many. Some might even inspire you. I’ll tell you this much… Today, David Klein is a chiropractor, with an insatiable wine palate, and has blossomed into an enviable position with his wine club.

Sipping Away, 30 Years of Unique Wine Experiences is really well written, very engaging, and opens up the world of wine from a retailer’s perspective. He also gives great advice to anyone already in or wants to be in the most magical world… the one of wine.

A quick read on a long flight; or, just absorbing one chapter at a time, before you’re slipping away into dreamland. This is a seriously delightful book, this Sipping Away.