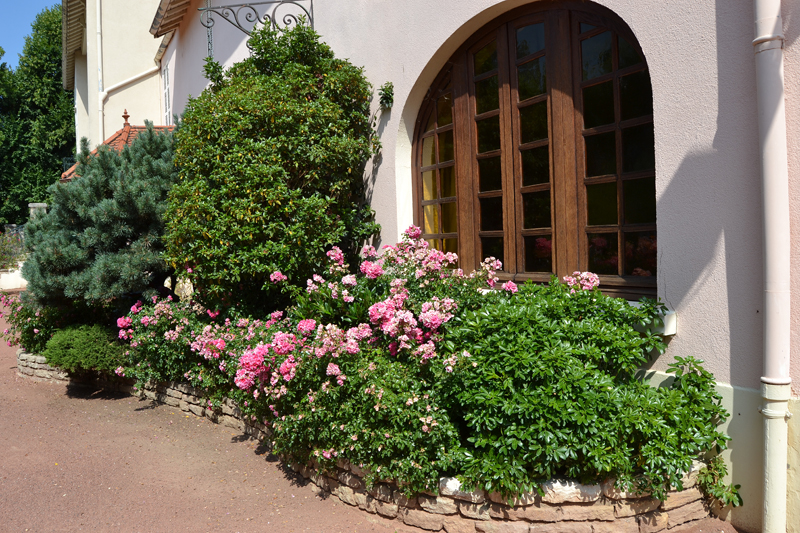 These are all of my own images from my trip to Beaujolais, with the exception of Wine Folly’s map. 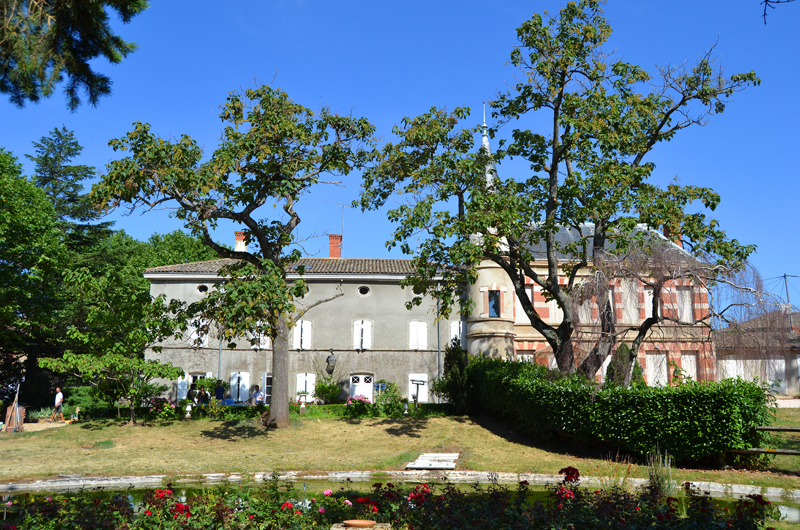 In the real life picture, to the bottom left of the building, you can see our picnic gathering, for a tasting of their Gamay wine paired with Madame Sidauren’s homemade Gougères (French Cheese Puffs). It was a perfect morning in their beautiful gardens and at their intriguing and captivating chateau. 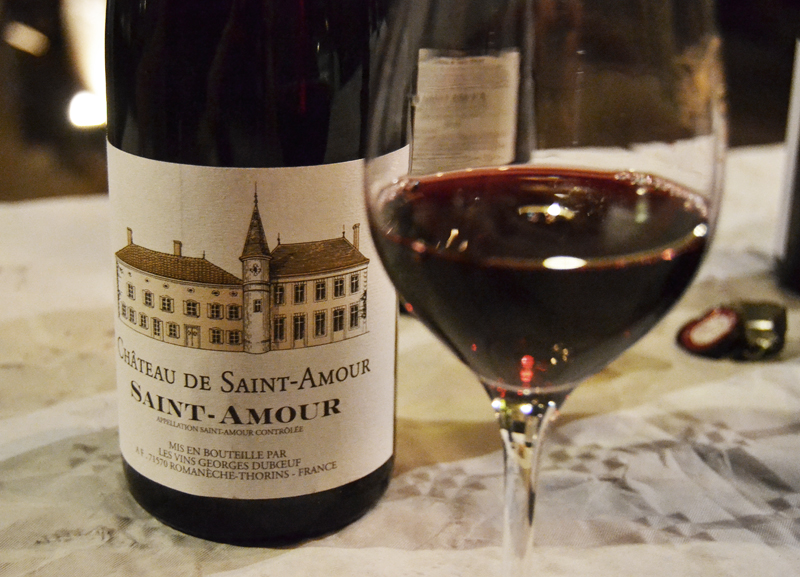 I’m sure you now know how this label came into existence, seeing both the chateau and the wine bottle’s label.

Each day of the eight days planned, we had so many chateaus to see, and we were also taken to the thrilling heights of the region, in a helicopter. This areal photo, taken in Beaujolais, was of the Golden Stone region. It was seriously fantastic. Our Pilot was Bruno Rivollet, of Helico Sun. 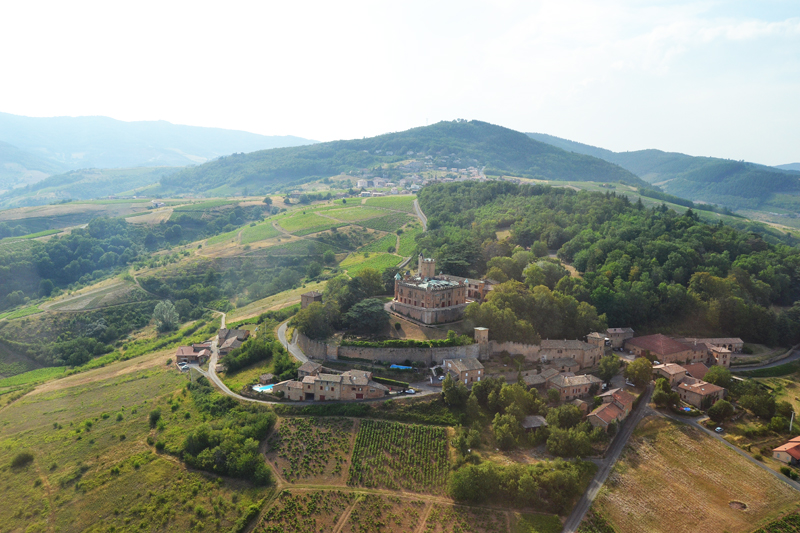 Just to see, read, or hear the word Beaujolais spoken is tres jolie! And really, so are the terroir, wines, culture, people, and foods, from this region of France.

For most of us, there’s no better way to learn about the magical Beaujolais region, than by being there. Not very practical for many of us, though, and with that in mind, we usually depend on the learnings and teachings of others; either from those who live in the area, or from journalists who have made a trip to Beaujolais, who interview experts for details. This latter example is today’s story. 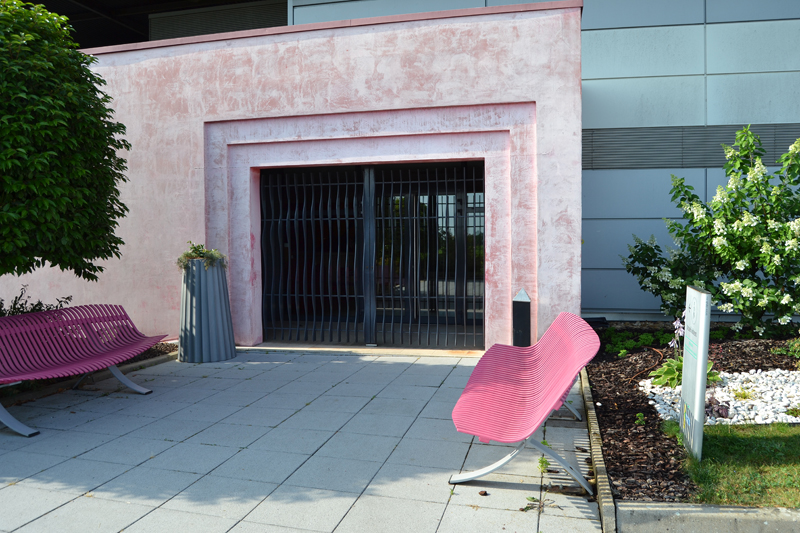 We entered the winery on our first day to meet winemaker Denis Lapaler. Denis is one of two head winemakers on the Georges Duboeuf team; the other being Emeric Gaucher. 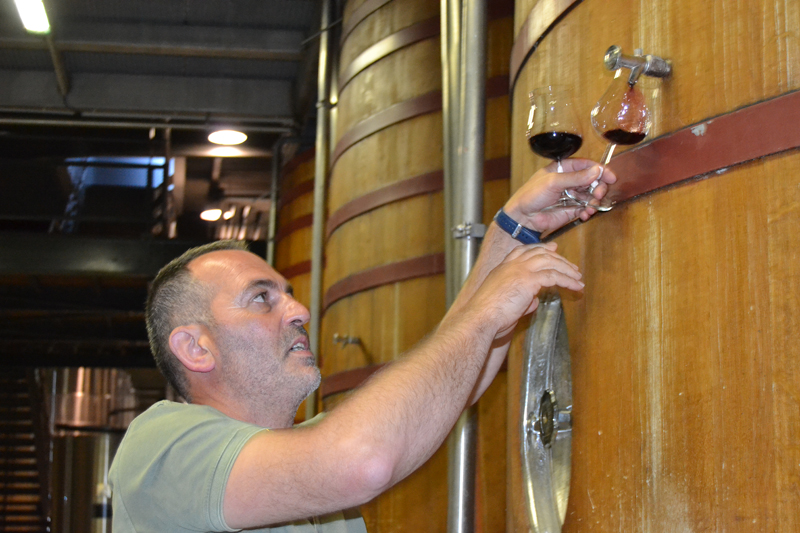 PHOTO: Winemaker Denis Lapaler taking wine from the tank, so we can taste a developing Beaujolais,. Denis’s job is overseeing all quality control, as well as making wine for Georges Duboeuf.

I was the guest of a 10-day, well organized, and intense educational journey into Beaujolais. It included visiting the parent company of Les Vins Georges Duboeuf, as well as visiting other families growing wine grapes for the Georges Duboeuf family of wines.

The Georges Duboeuf family has it own estate wines, as well as being highly regarded, négociant merchants from Beaujolais. They’ve assembled the highest quality of committed, small family growers and winemakers, and have added them to their portfolio, each with specific designations. Their umbrella company includes Cru Beaujolais, Beaujolais Villages, plus Beaujolais, and Beaujolais Nouveau (which Georges Duboeuf popularized the tradition in Beaujolais of making a very young wine, with which to celebrate the harvest.  As they call it — “the first wine of the harvest.”) 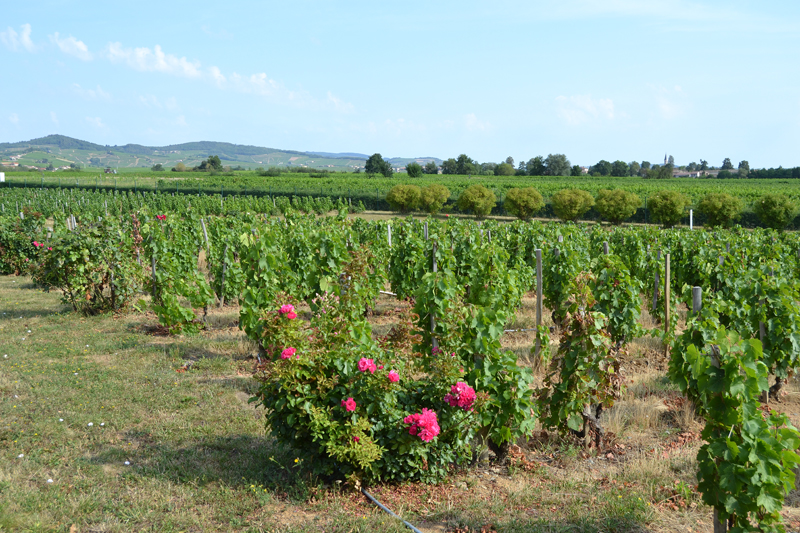 Some members on their team just grow grapes, while some grow and make the wine to be delivered, and still more have chateau designated wines. Every configuration has it’s own procedure with rules and regulations. And, a lot of really great wine is made, following their guidelines. For a consumer, this makes for some very tasty and consistently delightful and distinctive wines. Tasting their samples, and quoting what I heard a five year old say on the return flight, as we were leaving Paris)… Ooooo la la!

So yes, I’m happy to say that if any of the George Duboeuf bottles of wine were placed in front of me, I trust that they’re a delicious representation of the Beaujolais region, of France, based on the family’s longstanding history in Beaujolais, their quality control practices, and all else that I’ve tasted and learned. 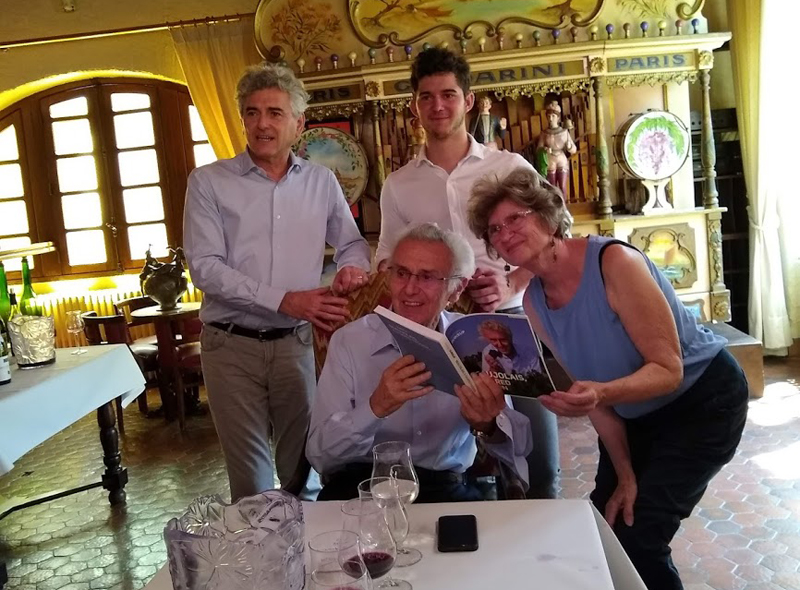 PHOTO of Georges Duboeuf signing his autobiography for me: Left to right, sitting, Georges Duboeuf and me (star struck). Standing, Franck Duboeuf and his son Aurélien Duboeuf… Three generations met us… An important moment in history for the Duboeuf family.

These thousand or so words don’t even begin to express what I’ve just learned in Beaujolais, as a guest of Les Vins Georges Duboeuf. There will be many more profiles of the brands, who are growing the wine grapes and are part of the Georges Duboeuf Family. Stay tuned for more Beaujolais profiles of the lovely French families, we met along the way… living and loving in the Beaujolais region of France… the wining, dining, and experiencing the good life in rural France. 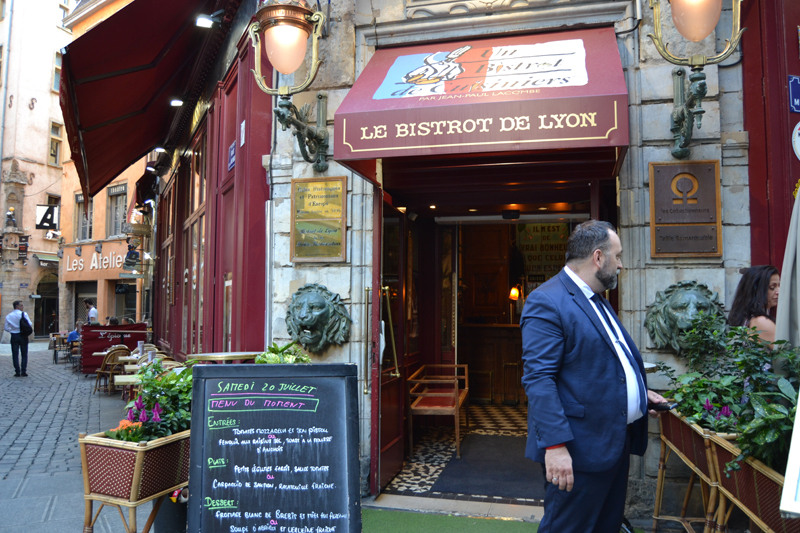