This one reminds me of Willamette Valley’s Oak Knoll Winery. Being the exclusive partner of Portland’s popular Rose Parade, as regards wine, Oak Knoll Winery conducts an annual, label design contest. The inspiration, actualization, anticipation, and gratification for everyone in the process takes on a life of its own, until announced. It’s a lot simpler to just hire a few people in the design process. Any wine company, having the good business sense to engage its audience, like this, demonstrates great business acumen. The closer a company draws in its audience, the more ambassadors it’s created. It’s they, who ultimately, sell wine to their friends. 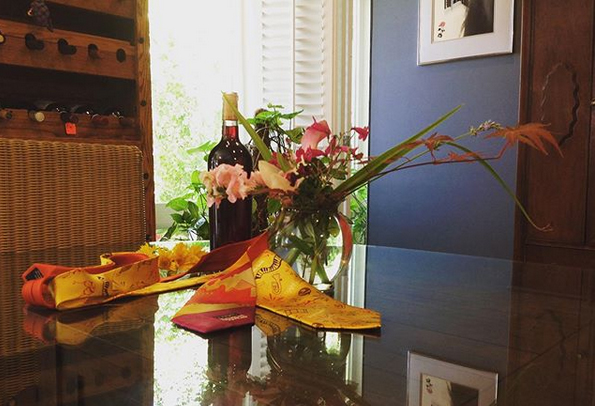 SO THE JUXTAPOSED ART

The picture I’ve taken [above] shows the “old” guard… The ties of the Duboeufs, with the emerging new connections… It feels like the left side of the picture tells the story of history and local culture… Then, in the center, there’s a split from the past, which segues into what’s new and even more exciting. Fresh, bright, and alluring, having a Georges de Duboeuf’s Beaujolais Nouveau is like having friends arrive for one day (the first few sips); and the excitement easily grows into a much longer finish than anticipated, with the great visit.

HISTORY OF THE (GAMAY) WINE

The tradition of Nouveau began when the winemakers and growers of the Beaujolais region celebrated the end of harvest with a young wine that was initially only produced for local consumption. Georges Duboeuf was the first to bring that quaint local custom to wine-lovers outside of the region, creating a worldwide phenomenon. Bottled six-to-eight weeks after harvest, Beaujolais Nouveau is fresh, fruity and vibrant. It is often considered to be an indicator of the quality of the vintage and it is best served with a light chill. The wine’s annual release the week before Thanksgiving has made Beaujolais Nouveau a harbinger of the holiday season in the U.S. for more than 35 years. 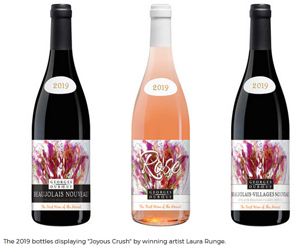 Georges Duboeuf is a premium producer of award-winning French wines from the Beaujolais and Mâconnais regions of Burgundy and the South of France. His legendary palate, his ability to spot great wine and his enthusiasm made him a celebrated figure in the wine industry. The company that he founded, Les Vins Georges Duboeuf, brings to market wines renowned for their quality and value. They work closely with hundreds of small family wine growers to procure the highest quality fruit throughout the region, as well as export many small Chateau and Estate-produced wines that would otherwise not be able to brings their wines to the US. Georges’ son, CEO Franck Duboeuf, has taken on the tradition of leading the family winery and company, helping to navigate Les Vins Georges Duboeuf through the world’s wine markets as they continue to thrive in the 21st Century. Les Vins Georges Duboeuf is imported by Quintessential Wines, based in Napa, California. 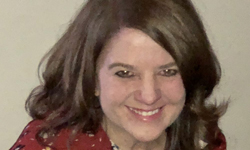 We have a sneak peak…