The Wines of Long Island, by José Moreno-Lacalle 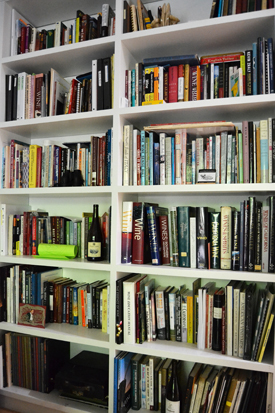 Wine-blog’s Books page lists (with links) the wine books I’ve reviewed over time, since my first one on September 11, 2006. I was honoring Kevin Zraly’s Windows on the World Complete Wine Course ©1994. Kevin actually lost his staff, during the collapse of the Twin Tower, on September 11, and it just seemed like the right thing to do on that day. I had been given my copy while working at Robert Mondavi Winery. They were paring down their library and we got to bring home books we wanted.

I didn’t see the depth and breath of my “Books” page coming… Do we ever see the growth of something simply started, like planting a tree, for the width and height it will reach, until many years later? No, but still we plant, to give it a place to be. Someday, this library will find a new home in some small wine country library. I’ve yet to decided where. There are a few excellent options I’m considering, though.

I’ve always loved books. I’ve yet to review all of those books from Mondavi, because once I wrote about Kevin’s Zraly’s, I began to be queried about reviewing more… 13 years later, and the Book page is a pretty good resource. As I just searched through my files to find the first book I decided to review, I discovered it was Kevin Zraly’s. What Irony for me… Last October, during my trip to Italy, we finally met in person. He was on a book tour in Italy, a close friend of Michael (Mick) Yurch’s. I was there to learn about the companies that Mick Yurch is representing. We all met at Castello di Meleto in Gaiole ~ In the Chianti Classico region of Tuscany.

Fast Forward to the Present

“For the last couple of weeks I’ve been working furiously to get my book on The Wines of Long Island fully corrected and revised. It’s now in the hands of my designer, who’s doing an excellent job of helping create a book with high production values. In the meantime, I’ve also gotten blurbs from Mark Squires and Kevin Zraly, who liked my book very much.”

I’m familiar with The Wines of Long Island. This is a “must have,” updated version; a necessity for any (nearly) complete wine book library.  (I write “nearly,” because new books are always being released.) Long Island has a long history in wine, which began long before Vitis vinifera vines were bring planted in California, let’s say. 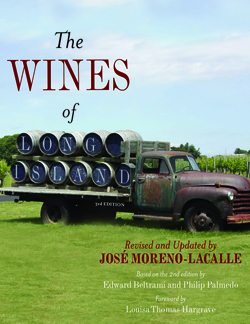 Wine is a subject that has held a special fascination for me for well over fifty years.  In fact, I used to write a wine column for Abel Magazine and Park West back in the late 60s and early 70s.  That made me a kind of pioneer as writing about wine wasn’t widespread in those days (when the only useful reference written by an American was Frank Schoonmaker’s Encyclopedia of Wine, published in 1964; Hugh Johnson’s first book on the subject, Wine, came out in 1966; then, in 1970 Time-Life published one of the first mass-market books on the subject, Wine and Spirits,by Alec Waugh, as part its Food of the World Series).  The first winery that I wrote about was Pleasant Valley Wine Company, in Hammondsport–in what would become the Finger Lakes AVA–back in 1971.

The Wines of Long Island was originally published in 1987 and a second, revised edition was issued in 2000.  19 years later, it remained the best and most complete single volume on the history, geography, viniculture, winemaking, and the wineries of Long Island.  It was carefully researched and quite well written.  It is also seriously out of date.

In the 19 intervening years a very great deal of change has taken place in the wine industry of the region. In 2000 there were 25 wineries and vineyards, about half of which are no longer in business; in 2019 there are 62, including several wine brands that have no winery or vineyard as such and use a crush facility.  A handful of the wineries are not even in the East End, but elsewhere in Suffolk County, with two in Brooklyn.

19 years ago the issue of sustainability was scarcely on the radar. Today, sustainable winegrowing is a major issue worldwide, and a new entity, the Long Island Sustainable Winegrowers association, is providing independent certification for members.

Long Island wine country has become a major tourist destination, counting about 1.3 million visitors a year, and most wineries provide not only wine-tasting facilities, but also weekend entertainment during the high season.  Many of them also host events, dinners, and weddings.

The new edition of The Wines of Long Island provides all this new information as well as updates to the history of the region in a new edition.  Every wine producer on Long Island is described in the book, some extensively, often with anecdotes. This edition is intended as the principal reference and guide for the wines of Long Island.  It has nearly 300 pages, a foreword by Louisa Hargrave, and an expanded section on terroir, varieties, and vintages.  Most of the 127 illustrations are in color.

Mark Squires of The Wine Advocate says, “This book’s greatest virtue is its ability to appeal to both geeks and average consumers. It tells you where we are and how we got there.”

Kevin Zraly, wine teacher and author of Windows on the World Wine Course, writes that the book is “a must-read for anyone visiting the wineries of Long Island.”

Carlo DeVito, author, East Coast Wineries , writes: “Though I taste in the region annually, Mr. Moreno-Lacalle’s book is the best tour of Long Island wine I’ve had in years. Thorough, complete, and definitive. The author has done a superlative job.”

Louisa Hargrave, a founder of the Long Island wine trade, wrote in the foreword of the book: “Palmedo and Beltrami revised their own book in 2000. Now, the time is ripe again for revision. How appropriate it is that they handed their project over to José Moreno Lacalle, a man who, like themselves, views the wine business with the perspective of his own successful career outside the industry. With worldliness and sophistication, he brings his profound interest in the topic—twinkle in the eye, and glass in hand.”

José Moreno-Lacalle has been writing about Winemaking and Viniculture in Long Island for his blog, Wine, Seriously, since 2010.  he holds a Wine & Spirits Education Trust (WSET) Diploma in Wine (a professional certification) and has an MA in Art History as