I don’t have to image. I have saved a life; and, I know what an amazing feeling it is to still think back to that fateful day in the 1960s. That moment is as vivid today, as it was then. I saved a man’s life, by ripping open his zipped jacket – like it was zipped with Velcro. But, it was zipped with a good ole fashioned metal zipper. It was truly zipped, while his chest was heaving from the pressure. I knew I had to just rip it open; and I did, like it was a piece of photocopy paper. What an adrenaline miracle! Later, I had to figure out what I had done, because I was in completely in the moment.

You may have heard about Ron Rubin’s “TRAINED FOR ‘SAVING LIVES'” foundation (Ron Rubin Winery in Green Valley of Russian River Valley).

Ron will not stop until he’s supplied 450 Automated External Defibrillators (AEDs) to California wineries, virtually free to them. The suggested retail price for the ZOLL defibrillator is $1,700, BTW.

There is a $360 fee to have a staff training by the American Red Cross. In the event that someone’s heart does stop beating in wine country, someone else needs to have the knowledge and confidence to quickly step forward and use the AED. So, training is essential and critical.

The program is now in its second year, with 205 AED’s distributed so far. Link for your friends already on board…

Ron Rubin’s commitment has been receiving prestigious awards for selfless philanthropy. It’s not why he began this journey, however. For Ron, this foundation was created as a “giving back.” Had his son Todd Rubin not been with him on his fateful day, when he experienced  a too rapid heartbeat ventricular tachycardia and saved  by defibrillator, the likelihood of this foundation probably wouldn’t even exist.

But it is a reality, and it’s because of this program that I’m writing to you. Ron Rubin is a client and in my 17 years of working in the wine business, this is the most selfless act I’ve witnessed for the preservation of human sustainability, as a one-on-one, so far.

“How to” become involved

After a winery’s qualifications are approved to receive a ZOLL AED PLUS, it will be promptly contacted, by a representative from the American Red Cross. This will be to schedule a CPR/AED/First Aid training for your winery’s team. To be approved, each participating winery must agree to have its staff CPR Training FOR $350.00, payable to the American Red Cross. 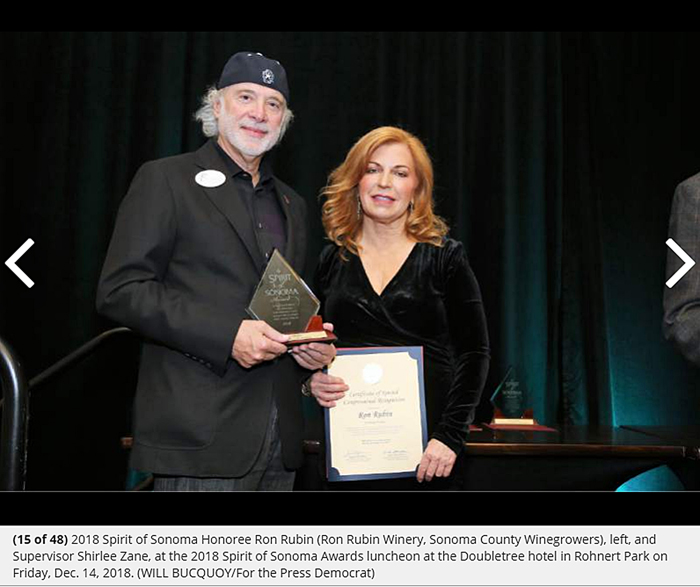 In 2018, Ron Rubin received two awards of excellence for the TRAINED FOR “SAVING LIVES” program:

FROM: WALLIN & KLARICH ~ What are California Good Samaritan Laws?

California Good Samaritan laws protect those who attempt to help others.

California Health and Safety Code Section 1799.102 says, “No person who in good faith, and not for compensation, renders emergency medical or nonmedical care at the scene of an emergency shall be liable for any civil damages resulting from any act or omission.” The law also clarifies that a person cannot be held liable for civil damages unless their actions or omissions constitute “gross negligence or willful or wanton misconduct. “

The law says that the intent of California Health and Safety Code Section 1799.102 is to encourage people to help each other during emergency situations, while ensuring that those who do volunteer to help act responsibly.1

Join me in being that hero in a heartbeat…