It All Begins in The Vineyard with “Root Cause” 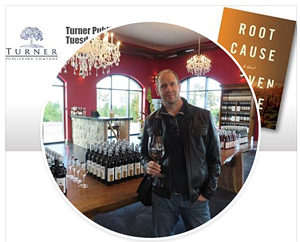 [PHOTO: Steven Laine with his new novel Root Cause, borrowed from his Facebook page.  ADVANCE COPY]

If you love wine, love to read, and love to occasionally embark on a fantasy wine journey based on actual wine facts, Steven Laine is going to deliver an impactful novel, of epic proportions. This story begins in the vineyards of Tuscany, Italy, and then takes you around the world’s wine regions, with its spellbound drama and your heart racing to keep up. As I was nearing the end of this journey, with all of its intriguing characters, my heart was pounding in my chest. Our characters Corvina Guerra and Bryan Lawless were either going to be heroes for world history, or major wine criminals, forever more. Never, in my lifetime of reading, did I ever wish I could read much faster… I even had the thought, “I wish this was a movie, so it could all just be delivered with quicker speed.” 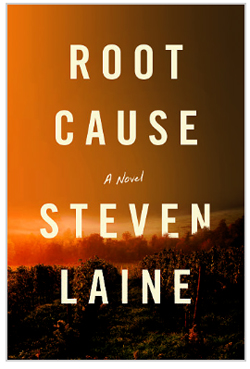 And… minor observation: he’s got an obsession for women’s silk scarfs worn by Corvina, his woman of interest… “a Bombay paisley silk chiffon, draped loosely around her shoulder…” ~ for instance.

The drama is epic. It all begins in the vineyard, and it’s also where it ends.

SIDEBAR: Published by Turner Publishing, history lessons are delivered in Root Cause, in ways we might not have yet discovered: prohibition, phylloxera, and Champagnes chalk caves, for instance.

The Chalk Caves of Champagne: Although I’ve had wine travels into Europe, I’ve yet to visit France. I had no idea about caves constructed by Romans, and now I want to go to Champagne to view them, absorb their historic aromas, feel the cool, moist air on my own cheeks… I’ve dreamed about travels to Paris, Burgundy, and Bordeaux. My passions have been awakened for Champagne, now before any other regions. From Architectural Digest:

Around 80 B.C. the Romans dug into the ground below Reims, France, in the Champagne region to mine salt and chalk. Hundreds of years later, in the 1600s, local winemakers found a new use for these caves: Champagne storage. Since these were the days before artificial refrigeration, the caves provided the chilly temperature, humidity control, and protection from sunlight and vibrations needed for the perfect maturation of this delicate beverage. Wine cellars and caves have a similar subterranean history, when wine was buried in ceramic jugs during fermentation. Later, catacombs were used as wine storage, until the French began digging dedicated wine caves.

According to his biography, Steven Laine was raised in Ontario, Canada and has dual Canadian and British citizenship. He has traveled the world working in luxury hotels for international brands including The Ritz, Hilton, Starwood, Marriott, and Jumeirah. When he was Beverage Manager of a five star hotel in London, he learned all about wine and has since visited over one hundred vineyards and wineries in Napa, Burgundy, Bordeaux, Champagne, Spain, Portugal, Germany, Switzerland, Lebanon, and South Africa. As the only North American ever invited to be a Member of the Champagne Academy, he had the privilege to tour the major Champagne Houses in France. His circle of friends is made up of winemakers, Masters of Wine, Master Sommeliers, restaurant managers, and wine distributors from all over the globe. He is now working on his next novel.

And, I can hardly wait for that one, while I highly recommend this one, Root Cause.