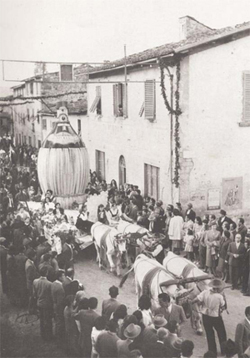 I was the guest of Castello di Meleto in Gaiole ~ In the Chianti Classico region of Tuscany.

Forget your daddy’s straw basket candle holder, dripping with memories. Castello di Meleto in the Chianti region of Tuscany has gone way upscale sophisticated and delicious, with their Super Tuscan Sangiovese wines, and for good reasons.

Service to the saints is held each time another cork is pulled at Castello di Meleto. I found myself in their chapel room, one morning, before anyone else arrived, just quietly meditating. I stopped when the flurry of breakfast preparations began in the castle, whirling through the little room, as I sat in darkened silence. I was reflecting on how fortunate I was to be in a fortification, built in the 1200’s for Benedictine Monks. What must have it been like then? 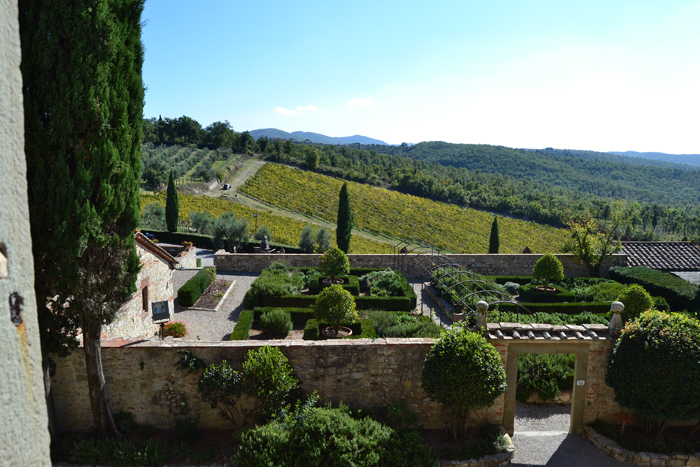 Why did I feel like Rapunzel, when looking out of my bedroom window? In modern times, there’s no prince below. Been there, done that, and now he’s a king. And, I’ve cut off most of my hair in the process. There is no hair to climb, no need for anyone to come to my room and rescue me. That fairy tale wasn’t going be played out this time; however, in my current circumstance, I could still imagine what it would have been like, given the place where I had landed. Because, there I was, in a Benedictine castle, opening my window, looking below, where the stage was set for a new fairy tail. 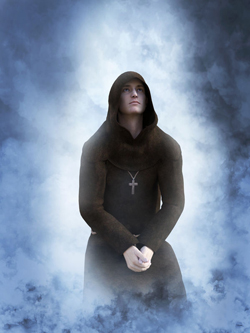 It Began With a Benedictine Monk

First off, a Benedictine monk is a man of the Catholic religion who follows the rule of Saint Benedict of Nursia [birthplace of St. Benedict, founder of Western monasticism], a Christian saint and a patron saint of Europe. St. Benedict founded multiple monasteries in Italy. Recognized for his wisdom and leadership, men seeking to live out the monastic life sought him out to be their abbot. There is no evidence that he ever contemplated the spread of his Rule to any monasteries besides those which he had himself established.

The word “monk” comes from the Greek word “monachos” meaning “single” or “solitary”. It means to practice asceticism by living alone or with any number of other monks. Dedicating one’s life to serving others, or voluntarily choosing to leave mainstream society to live life in prayer and contemplation. In Greek the word can apply to women, but in modern English it is for men, as the word “nun” would be used for female monks. 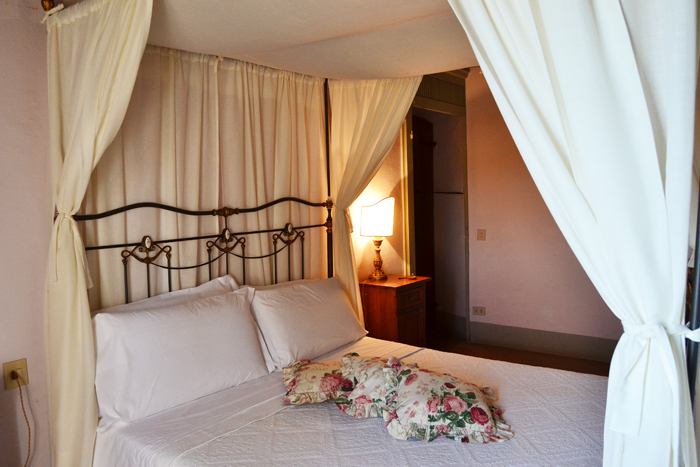 [PHOTO: Jo Diaz, my bedroom where Benedictine Monks once lived.]

And, I was sleeping in my room, enjoying Tuscan foods in their dining rooms, and moving through their gardens, as they once had… where they had to deal with the people of Siena, who were trying to take away their monastic lifestyle at their Abby, now the Castello di Meleto. 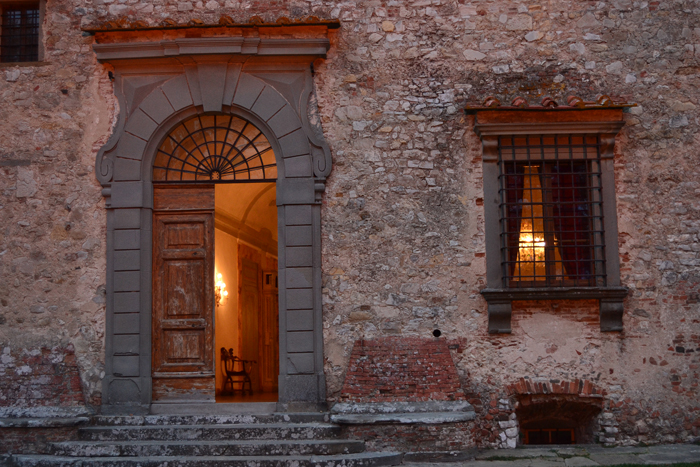 How did I get there?

How did I become so fortunate? I really was there. This was not a fairy tale, and yet it felt like I was in one. I was in Gaiole, Italy, in the heart of Chianti county, in Tuscany, as a guest of Castello di Meleto. My wine blog began the process… all the years of writing, all the time spent in full disclosure. I received an Email from Michael Yurch of Bluest Sky Group, who was organizing a group of wine professionals.

Ms. Diaz. I really like your policy, as stated on your home page.  No nonsense and no one’s time wasted! I’m leading a small group of wine professionals on a short trip to Tuscany and Le Marche… 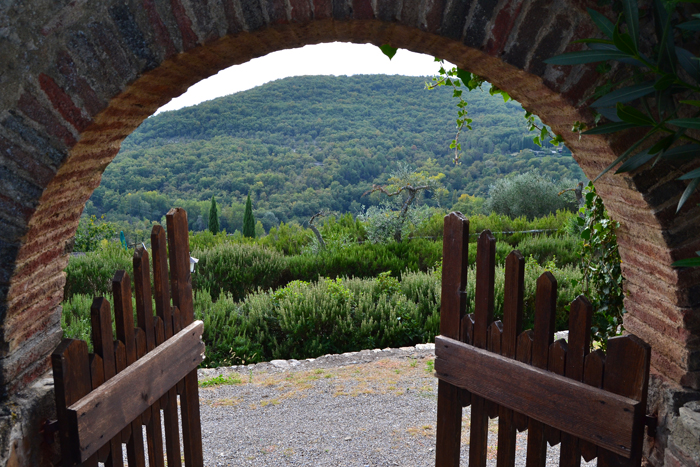 I accepted, and now the tales are being written. I took copious images, and this story is more of a photo journal. You, too, can imagine yourself in Gaiole, Italy… Or, maybe even (better) get yourself there, and live the dream. Delicious Chianti wines are waiting for you, too. (The Straw baskets are a thing of the past, sophistication is the new norm.) 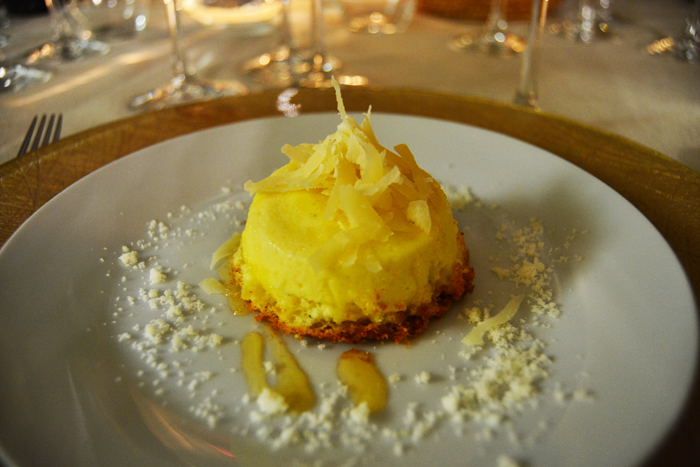 Dine at the castle, with delicious, authentic Tuscan foods prepared by their excellent chef team. Each dish is paired perfectly with their wines.

Roam their gardens, swim in their infinity pool (the monks in heaven as smiling down on this one… something their lives couldn’t have even imagined). 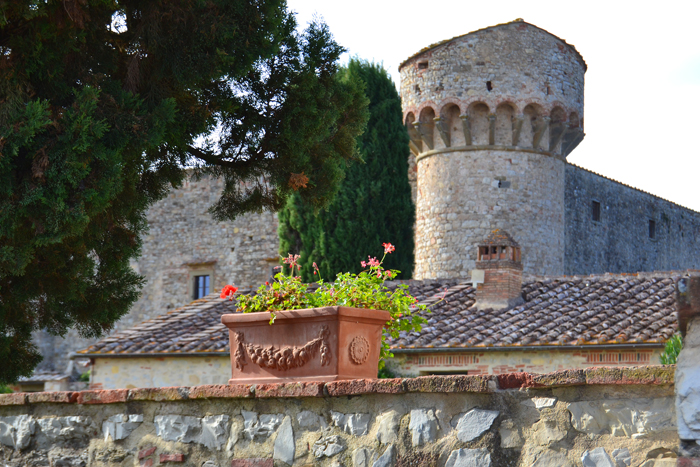 Castello di Meleto is now a paradise of quiet splendor… a far reach from the days of  the Benedictine monks, who also lived there, in their days of solitude. 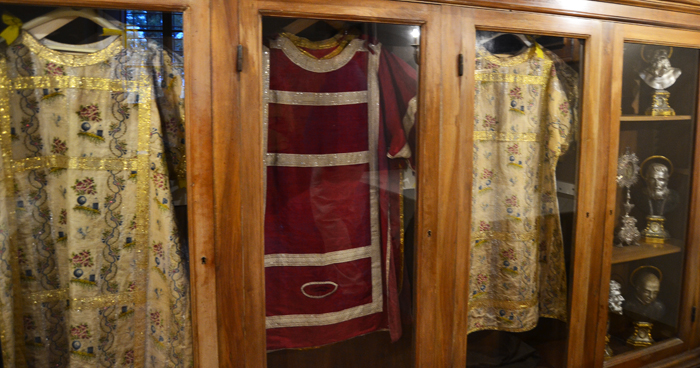 [Vestments worn by the monks, during holy days.]

The first accounts relating to Meleto date back to the eleventh century, at which time it was a property of the Benedictine monks. Subsequently it became the property of a certain “Guardellotto,” a member of a local feudal family, whom Frederick I Barbarossa dispossessed of his properties, giving them to the Ricasoli-Firidolfi family. 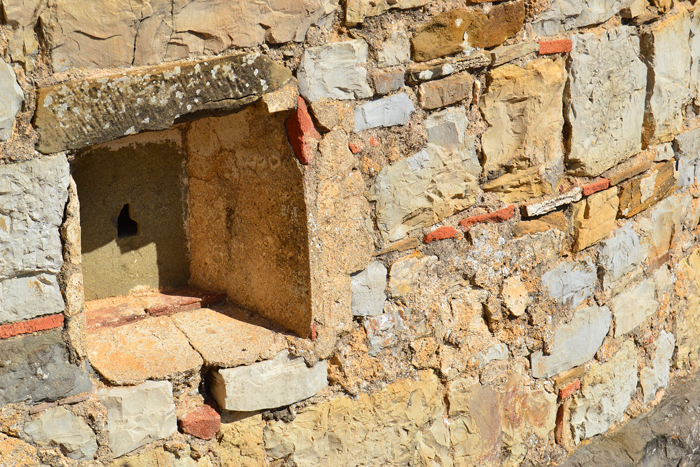 [When the monastery had to become fortified during the wars.]

This is the Castello di Meleto in Gaiole in Chianti. Its origins date back to the 11th century when it was the property of Benedictine monks. Ownership the[n] passed to a feudal family called Guardelloto. [Emperor] Federick I Barbarossa dispossesed him and the castle passed to the Ricasoli-Firidolfi family in 1256. Its strategic location between Siena and Florence meant the castle was the background for many wars between the Guelphs and Ghibellines.

The [noble] family branch of Firidolfi da Meleto originated here. The name “Meleto in Chianti” was first included in the “Libro degli Estimi” (Book of surveying) of the Florentine Guelphs as property of Firidolfi family in 1256.

Its location, set between the Republics of Siena and Florence, ensured that the Castle was the background of many wars between the Guelphs and the Ghibellines, one of which was the second Aragonese invasion of Chianti in 1478 when it was occupied by enemy troops, and during the Medici War, in 1529, when it was besieged by the Senesi militia.

More of the castle, according to Chiantishire:

The Castello di Meleto was a possession of the monks of the nearby Coltibuono Abbe. The name Coltibuono is Latin (cultus boni) meaning good harvest.

I cannot help but wonder: Could this suggest that this Castello was a sacred place for the Monk’s viticulture? I believe we’re all left to wondering, about this fairy tale Castello di Meleto. A little mystery does the soul good, vero?