Dr. Petite Rosenblum, My Mentor and Friend, and Memories by PSILY Members

Jose walked into my office, saying, “Oh, boy, as his voice went down on the “boy.” Then all went silent. “What!” I demanded to know. “Why say that and then say nothing?” I wondered. 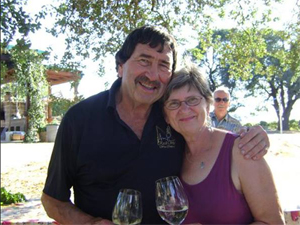 Gone? Stunned. Just stunned. I couldn’t even say anything. So much raced through my head, including “Why?” Shaking my head and thinking, “Why?” I didn’t get to see him during this past Fourth of July at his Lone Oak Vineyard, like we had planned. REGRET… I was felling crappy on the Fourth. We were still going to schedule a picnic in the vineyards for the PS I Love You members, but the world had been so busy for us both. Unfinished business… By why such a great guy? And, why now? I wasn’t ready (whoever is).

What to do, as my heart had fallen down into my toes. My lips quivered. I had a very unpleasant job to do, being so public. It was my painful duty to go to both my Facebook page ( so many wine pro friends) and the PS I Love You Facebook page (so many members), to share with the world. I knew others would want to know, but then again – not really want to know.

On Facebook: “I interrupt A Line A Day to say how shocked and saddened I am to learn that my Petite Sirah buddy (Dr.) Kent Rosenblum passed away last night. Gee, Kent Rosenblum, I’m really going to miss you…”

Since January 1, 2018, I’ve had NO other posts on my wine blog except to record a diary from 1925 of a young woman living in Livermore Falls, Maine. I had NO plans to interrupt the flow this year. I hadn’t even considered someone of Kent’s public wine stature and my relationship to him publicly would come up. We never see these things coming, do we?

I’m going to share with you my absolute best Petite story, which involves Kent Rosenblum… My mentor, my friend, the funny man who could do no wrong, and helped me so much with PS I Love You.

I had organized a Petite Sirah panel for the Society of Wine Educator. Kent was on that panel, of course. He loved panels. You also need to know, if you don’t already: Petite Sirah can be called Petah Sarah, PS, Petite, and Pet… Each name had come up in that day’s presentation, by any of the 10 winemakers presenting.

One of the questions I asked Kent, off the cuff, as we were wrapping it up, was for him to give us his best Pet story.  I should have known  better…

“Well,” he said, in that drawn out style he had while talking, “I once had a neighbor who came knocking on my door late one night. I opened it and the guy was really stressed out.  My parrot just fell off his perch, right onto the floor. I don’t know what to do. ‘Well,’ I said, ‘let’s go take a look.’ When I got there, sure enough the bird was just lying lifeless on the floor. But it wasn’t dead. I said to him, ‘You know, the next time you decide to smoke marijuana, you might want to open a window.'”

The audience broke into howling laughter. It wasn’t the answer any of us thought would be forthcoming, but definitely the best and most memorable PET stories ever told to a Petite Sirah audience.

Dr. Kent Rosenblum began his working career as a veterinarian. Why did I think asking him about his favorite pet story would have netted an experience with Petite Sirah?

Kent rocked the house… Kent Rosenblum aways rocked any house he was in… He is (spiritually speaking always in the present) and was (no longer sentient) one of those rare people whom everyone loved. 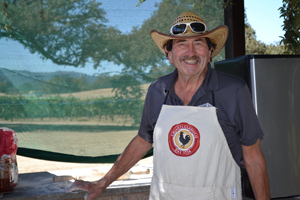 It was on a family cycling trip down the California coast in 1989 that I had my first Rosenblum experience.

The six of us did a grocery run in Santa Cruz and the wine aficionado doctor in our bike group bought a few bottles of Zinfandel for dinner at a small wine shop along the way. At the Sunset State Beach campground, some 70 miles from our starting point that day, starving and thirsty we shamelessly devoured canned beef stew at sunset and washed it down with a deep purple Rosenblum Zinfandel – splashed into coffee cups. I can still savor that hedonistic, spicy, jammy blackberry fruit to this day, a revelation, an awakening, a Zin epiphany, Zinspiration!

Little did I realize at the time that a short two years later I would be actually selling, among other brands, Rosenblum wines as a wine broker and partnering to launch a Zinfandel brand – Robert Biale Vineyards, ‘Aldo’s Vineyard’. Shortly after that when we joined ZAP, there they were in person– my Mt. Rushmore of Zinfandel winemakers: Joel Peterson, Paul Draper, Jerry Seps, and – Kent Rosenblum. Personally, it was a little intimidating hanging out with these icons that I admired but I was impressed with their Zinfandel passion, business smarts, and shared – how you might say “joie de Zin”.

Kent couldn’t have been more warm and welcoming to me – curious, colorful and quick with wisecracks. After I joined P.S. I Love You, there Kent was again supporting Jo Diaz’s noble Petite Sirah cause – engaged, enthusiastic, supportive, constructive. As Kent did for ZAP programs, he generously offered his and his daughter Shauna’s new winery to host Dark and Delicious, and the Petite Sirah and Food event went on to years of success.

Then in 2012, my daughter Maggie and I co-hosted the two week ZAP New Zealand cruise along with not only two of my favorite Zinfandel people, Doug and Nancy Beckett, and who else – Kathy and Kent Rosenblum! Not in a million years would I have guessed that one day I would be hosting a Zinfandel cruise along with these Zinfandel idols. There were daily tastings, dinners, and shore tours and in every moment there was Kent giving it his best – conversing, smiling, laughing, and of course – telling Sven and Ole jokes.

So here’s to you Kent Rosenblum- we are thankful for you setting a new standard for Zinfandel, trailblazing Zinfandel for the rest of us, saving and elevating Zinfandel and Petite Sirah for so many historic vineyards, but most importantly – bringing a sense of pride, fun, and joy to the entire Zinfandel community and wine-lovers everywhere. We are deeply saddened by your leaving us so soon but left knowing that we are all the better because of your life’s work and having known you.

There would not be a Kick Ranch vineyard without Kent Rosenblum.

I first met Kent in 1992 when my wife and I invested in his small family winery.   When Kent learned that I had an interest in learning about grape growing, he invited me to meet his grape growers and I started coming to all the “Grower Days” he organized.  I learned a lot about how a winery works with its growers to grow the best possible fruit, and I saw that his growers loved working with him  With Kent’s encouragement, I bought the land that I planted as Kick Ranch in 2000. Kent’s was my first winery customer, and Kent made the first 90+ point wine from Kick Ranch.

Kent always greeted me, and everyone else, with a smile and a handshake. And yes, I loved hearing his Sven and Ollie jokes.  Kent gave me a start in the wine business that had a profound impact on my life,

I opened a 2004 Rosenblum Petite Sirah last night. Big and exuberant still – just like Kent. I am very saddened by Kent’s passing and very grateful that I knew him.