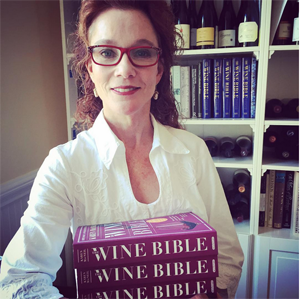 I got my The Wine Bible, long before I began reviewing wine books. The copyright on my copy of this book is from 2001. Once I started reviewing books, it didn’t occur to me to go backwards in my amazing  and developing library for any books already collected.

But, every time I get Karen MacNeil’s weekly newsletter, I feel the void of not having written something about this important body of work, from one of wine country’s most prominent wine writers…

The first book I ever reviewed was in 2006, from Kevin Zraly (five years after Karen’s release). It was “9/11 ~ No Degrees of Separation for Kevin Zraly, yet the beat must go on.” That was a life changing event for anyone alive during that time, and my focus began to include wine books. Asked to attend a wine tasting and book signing from Elliot Mackey of San Francisco’s Wine Appreciation Guild… While there…

As Kevin Zraly inscribed his book to me, we talked about the fact that I had a loss in my family, and he told me he had lost his entire family. The quiet of his gentle, sweet nature counter balanced the evil of those who participated in this paradigm shift upon humanity.

Kevin wrote, “Wishing you peace.” That bespeaks how he’s moved forward, one kind step at a time. Kevin’s book now has sold over 2 million copies [as of 2006], and is the number one best-selling wine book of all time. This would mean that we’re all learning a lot about wine from this gentle giant of wine knowledge.

Now we’re here, so many years later from when Karen MacNeil’s Wine Bible entered my library. And it’s stood the test of time as a very important addition to my (anyone’s, honestly) wine library. Her newsletters arrives each week, into my E-Mail inbox. It’s always great advice for anyone looking for a new wine worthy of purchasing, like this newest one from Karen:

The first thing to know about Alsace riesling is that it’s not German riesling. In fact, in some ways, it’s the polar opposite—yang to Germany’s yin. What I love about it is its sense of profundity. Alsace riesling has gravitas and no wine more so than Domaine Weinbach’s Cuvee Theo, a wine of astounding minerally precision and near atomic density of flavor. It’s both gripping and a wine that holds you in its grip with its powerful beauty. Domaine Weinbach is owned by a mother-daughter team who for decades have made many of the best wines of Alsace. (13% abv)

In her scholarly tome (932 pages), you’ll find just about anything you’re looking to know, including the following fun examples, just for teasers:

When I came into the wine business (1993), Karen MacNeil’s feet were already firmly planted on the ground, and that’s where they’ve been ever since. For me, she was an inspiration and remains that way. She doesn’t need to write any other books, because this one is a quintessential. If you don’t have The Wine Bible in your library, yet; or know someone who not only loves wine, but also loves learning about wine, it’s a perfect gift.

If you’re even thinking about become a sommelier, do yourself a favor and begin in earnest with The Wine Bible. You’ll become familiar with wine regions of the world. Here’s just a nibble of Anjou-Saumur and Touraine, for instance:

The middle Loire is probably the most fascinating and least well-known part of the valley. This is where the Loire’s best sweet and medium-sweet wines, sparkling wines, and red wines are all made, along with many terrific dry wines and rosés. While several grape varieties are grown, the leading white grape is chenin blanc, the leading red, cabernet franc. (p. 264)

This is a book for all times; mostly, though, it’s a book for right now; if you’re the least bit thirsty for wine knowledge, as well as the liquid manifestations…