Thomas Jefferson Has Been Reincarnated ~ Passions – The Wines and The Travels

Once upon a time, I was asked if I would review a wine book. I thought, “Why not? Lets see where it goes.” Well, it went alright. This side image only reached the “i”s” on Wine-Blog’s Books page. It’s impossible to capture it all here, nor do I want or need to. This isn’t about what I’ve done; it just demonstrates that one of my passions opened up a door I never imagined. As a result of this page, James (Jim) M. Gabler reached out to me to tell me about his books. I included the details in a story (Summer Reading ~ Let James Gabler Take You Away), as an exception, because I hadn’t read his books. His body of work, however, was fascinating. I’ve read about Jefferson’s historical passions with wine.

He thanked me, thought about it, and sent the following three books to me:

Dine with Thomas Jefferson and Fascinating Guests: an account of 25 fact-based dinners at Monticello, the White House, Paris, Philadelphia, and the French wine country. The dinners center on four of Jefferson’s passions: wine, food, conversation, and travel. The guests are a who’s who of famous people of the time. A perfect companion for those who appreciate wine, food, travel, interesting conversation, and the camaraderie of fascinating people. $25.00 Amazon’s Direct link. ©2015

An Evening with Benjamin Franklin and Thomas Jefferson: Dinner, Wine, and Conversation. Travel back in time to 18th century Paris and spend an evening with two of the most extraordinary men in history who loved wine and food and changed the world for the better. In the comfort of Jefferson’s residence, join Franklin and Jefferson for dinner, and in response to your questions they tell in their own words the most interesting stories of their lives. “A brilliant roman à clef around the lives and travels of Thomas Jefferson and Benjamin Franklin,” Robert M. Parker, Jr, Amazon’s Direct Link print $18, e-book $9.99. ©2006 – first edition

Passions: The Wines and Travels of Thomas Jefferson: “Brilliant”…”Magnificent”… “Remarkable”… “Exciting”… “Superb”… Winner of the 1995 “Veuve Clicquot Wine Book of the Year,” and a Robert M. Parker, Jr. “Wine Book of the Year” selection. “With the touch of an artist, Jim Gabler brings to life Jefferson’s passion for wine.” The definitive work on Jefferson and wine. $25, Amazon’s Direct Link ©1995 – first edition

I put them into copyright order, and knew where I needed to begin: Passions: The Wines and Travels of Thomas Jefferson.

Jim Gabler: In an Email to me, “The preface or introductions will give you a good idea of what they are about. ” 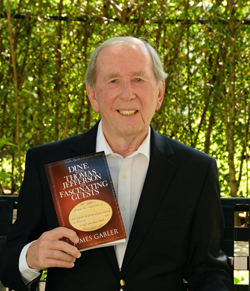 No kidding, as I began to read the Preface of “Passions…” it occurred to me that if reincarnation is a possibility, what better way to write one’s autobiography than to come back as an author and just get it done. Here’s what made me think this… See what you think.

“This is a biography of Thomas Jefferson at leisure, enjoying two of his passions-wine and travel. I have tried to capture Jefferson in the act of living and to let him and his contemporaries speak for themselves. The Journeys you are about to take with Jefferson are, for the most part, based on original sources: his letters, memorandum books, receipts, and the correspondence and diaries of his contemporaries. In addition I have personally followed his footsteps throughout Europe and the United States. These experiences have allowed me to contemporize what he saw and drank.”

Come back, relive it to refeel it, know the sources to consult, know how to finish what was started… Thomas Jefferson Has Been Reincarnated, and we’re all invited. I’ll review each book, from now and through the summer months. His writing style is very enjoyable, so I’ll get back to y’all with each one.