Napa at Last Light ~ Like a deer in the headlights, I entered the pathway 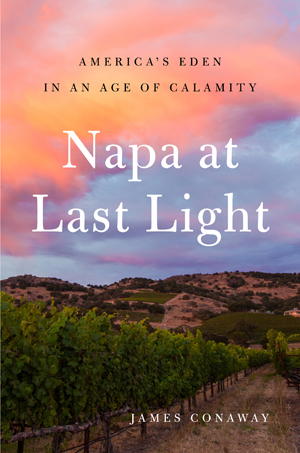 Where to begin, where will it end?

I was asked to review James Conaway’s book Napa at Last Light. Like a deer in the headlights, I entered the pathway. This is, no doubt, the most controversial book I’ve ever read about our beloved wine business. Because this business is so agriculturally based, and I’ve been personally involved in all agricultural preservation since the 60s, this book means a lot to me. And, it’s given even more insights into what we’re all doing in the business of wine.

Napa at Last Light will really make you think. James Conaway has pulled out all of the stops, I believe, to prevent a potential on-coming freight train of destruction, at this 25-mile long valley of diminishing capability for expansive continued growth. Basically, there are only two ways for ag tourism growth to go… Either pull out vineyards to build more razzle-dazzle on the valley floor, or go up the hillsides and remove Mother Nature that way. However, there needs to be more thoughtful respect given to Mother Nature’s agricultural growth, in either direction, so water is not negatively impacted in this process. And this, my friends, is the crux of Conaway’s angst… Enough angst, that he set about to write this very important, historical body of work.

As I was explaining this book to someone recently, he wanted to know James Conaway’s credentials, just to be certain I wasn’t becomeing emotionally involved in something that could turn out to be pure speculation. I told him that James Conaway has been living this story for years. Then, when I read the press release “Wine Women to host best-selling author James Conaway book signing and conversation at St. Francis Winery,” I was able to quickly list his credentials. Quoting:

A former Wallace Stegner writing fellow at Stanford University and an Alicia Patterson journalism fellow, James Conaway is the author of 13 books, including the trilogy: “Napa: The Story of an American Eden,” (1990); “The Far Side of Eden: New Money, Old Land, and the Battle for Napa Valley” (2002); and now “Napa at Last Light: America’s Eden in an Age of Calamity.” [2018]

Frank Prial, writing in the New York Times, said Conaway was “a reporter with a Saroyan-like sense of humor and a Balzac-like eye for detail,” which made him very happy. That book has been in print continually since 1990 and people still tell Conaway they enjoy and learn from it.

Napa’s sequel appeared in 2002. The Far Side of Eden: Old Land, New Money and the Battle for Napa Valley was a Washington Post Best Book of the Year and described in the New York Times Book Review as “an important story, emblematic of our time.”

So, that takes care of James Conaway’s credibility,

but not the double-edged sword, yet

A double edged sword exists. Let me explain…  This sword is made up of agricultural concerns on one side, and ag tourism on the other. The handle of this sword is water… Everything (from people, to land, to water rights, etc.) around this controversy is based on either side of this sword. Water is the life blood of lives and livelihoods… the handle.

Is water truly that important? Our bodies are made up of water, with the average adult male being comprised of about 60 percent; adult women, on the other hand, are made up of 55 percent water. (We women have more fatty tissue than men do, hence, slightly less.) Water is life, no water is barren and called a desert.

The common element in all Napa’s conflicts has been neither industrialism nor tourism, but water. Sometimes a minor player, usually a major one, water dogs almost all discussions. It was waste runoff that first drew…[people]  into the world of [each other], and the use of city water that heightened contention between [more people]. Run off from a proposed vineyard…on Howell Mountain brought St. Helena into a fray, too, and both state and federal regulatory machinery. And in… [another] epic, water played the lead in all its guises; purity, destructive potential in flood, utter ruin when absent.

I have so many thoughts about this book… I want to let you not only form your own opinions – because of the two sides presented – but, I also don’t want to finger point in either direction. There are very credible people (in their own right) on both sides of this sword. And even people in the middle, being local organizations… Some want tourism, some want preservation, some are protecting the Napa River.

What I want is to just make you think about the long term effects; i.e., do you want Napa Valley to become a complete Disneyland of Wines, as it’s beginning to be proclaimed; or, do you want to work in and visit Napa Valley, and continue to find yourself among the Redwoods and conifers, above the valley floor and vines on the floor of the valley, in a conscientious, guarded evolutionary manner?

There’s that balanced handle to consider. Can water be preserved in a sensible and logical way, so that in the future Napa Valley is not poisoned by too quickly stripping mountaintop lands? If this happens haphazardly, Napa is doomed – At Last Light. If it’s conscientiously evolved, Napa Valley will continue to be a true worldly gem.

Remember, Napa water averages only 25 inches per year – in a normal year. In 2013, only eight inches fell, due to what you want to call it – (Democrats) global warming or (Republicans) climate change. Either way, change is in the air, period, and what we do now will impact the future, either negatively or positively.

Will There Be a Kenopsia

Agriculturists want to keep the mountainsides in pristine condition, because, it’s the life blood of this valley; i.e., the Redwoods are deeply rooted and holding back the soils from flowing down the mountain sides, like what we just witnessed in Ventura County, when rains came and fires left the soils loose enough to just become mudslides. That impacted water quality. If you don’t believe it, just ask anyone who lives and works in Ventura County.

Will Napa Valley ever have that eerie forlorn atmosphere of a place, which was usually bustling with people, but then became abandoned and quiet… like drive-in-theaters of so many years ago? It takes about 50 years for time to replenish itself, once stripped. Or, will it survive the onslaught of progress, for the sake of commence above all else. That… is… THE… question of the century. Can this sword handle be held in balance? 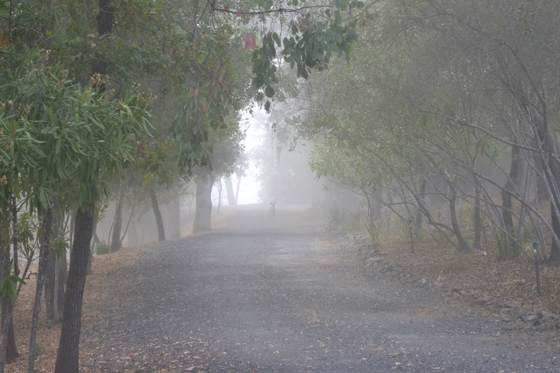