THE HEART OF THE DEAL: Simonsig Wine Estate began in 1971, in South Africa. Sinonsig Kaapse Vonkel created the original Méthode Cap Classique. The Malan Legacy: Since French Huguenot Jacques Malan first set foot in the Cape in 1688, the Malan family’s wine knowledge accumulated over many generations. The late Frans Malan, beloved patriarch of the Malan Family and one of the pioneers of the South African wine industry, was not only a craftsman of superior wines, but also introduced groundbreaking innovations including co-finding the Stellenbosch Wine Route and producing South Africa’s first Méthode Cap Classique, a bottle fermented sparkling wine made in the style of French champagne. Today, his legacy lives on through his sons, Francois and Johan, and grandson Francois-Jacques, the second and third Malan generations at Simonsig Estate.

THE SCIENCE OF THE DEAL: Home of the original Méthode Cap Classique, with generations of recognizable winemaking excellence, this classic method of making sparkling wine, by creating a second fermentation in the bottle, has been used in South Africa since 1992. And, this is how this sparkling wine was crafted.

THE SOUL OF THE DEAL: This is a very dry and refined rosé wine. I especially enjoyed its yeasty finish. A sparkling pink rosé, comprised of Pinot Noir and Pinotage wine grapes, I loved the quince and raspberry favors, as well as those inviting, effervescent bubbles. My exposure has been limited to only tasting a few examples of wines from South Africa, but never bubbles. Another experience for me is meeting and becoming a friend to David and Vasi Thathiah, who have deep global roots. They’re the proprietors of Karibu Vineyard, in Napa Valley. It is from them I’ve learned about South African history, through their eyes, generosity, and immigration. Within the texts that I have received from Simonsig Kaapse Vonkel, I’m finding a thread of commonality. Culture among them all is the following, and take this information into the crafting of these two wines: Expect a wine that has dignity, respect for others, and an elegance that just flows. 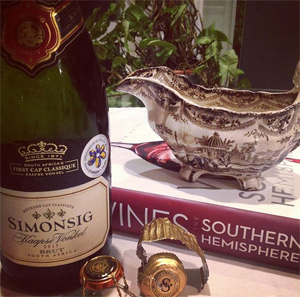 THE HEART OF THE DEAL: Philosophy ~ At Simonsig Kaapse Vonkel , the Malan family values drive the Estate’s commitment to producing wines of internationally regarded excellence, expressing the unique and diverse terroir of the Stellenbosch region. We also believe that being a gift of nature made for the enjoyment of people, our wine offering should always be complemented by true Cape hospitality and efficient service.

THE SCIENCE OF THE DEAL: The same as above: Méthode Cap Classique ~ A classic method of making sparkling wine by creating a second fermentation in the bottle, the term Cap Classique has been used in South Africa since 1992. This Simonsig Kaapse Vonkel Brut is a blend of 48 percent Chardonnay, 49 percent Pinot Noir, and three percent Pinot Meunier. All of the grapes were hand picked and placed into bins, then the bunches were gently pressed in pneumatic presses, collecting the most pure juice from the grapes.

THE SOUL OF THE DEAL Imagine a brunch, with an abundance of delicious morning foods, and bubbles gloriously dancing in your glass. The sun is low in the sky and shining brilliantly, as you dine on the patio… Enter the Simonsig Kaapse Vonkel Brut. This is like waking up to tart apples and grapefruit as a liquid diet, first lemon yellow in color, and a refreshing grapefruit finish. If ever I was to be in South Africa, this is what I’d be hoping for. I consoled myself with the gravy pitcher, in this picture, given to me by our family’s beloved Ada, who raised three generations of my family. The gravy pitcher at least 100 years old, and is a timely image of South Africa, when it was created. The pitcher means so much more to me now, after tasting this wine. I found that sense of place, the same sense Ada must have found. She was a graduate of the Fannie Farmer Cooking School. We all ate well, and her china must have meant so much to her. It was handed down to me; second generation family to her. Tying past memories and the flavors of of this Simonsig Kaapse Vonkel Brut together made for a very soulful experience. May you also find your magic moment with this delicious sparkling wine.