For those of you who might be missing Ronn Wiegand of Restaurant Wines, let’s catch up. From Ronn:

“I’ve been returning to California to taste 2-3 times every year since 2011, and each of my visits lasts a full four weeks or more (so at least two months a year in California tastings). This means that in the last seven years, I’ve spent more than 14 months combined, and have tasted more than 6,000 wines. In, short, I’ve been pretty active.”

Ronn Wiegand is in the US, until February 20, 2018. He’s tasting, and expects to taste altogether (and make notes on) around 500 wines.

RESTAURANT WINE is now in its thirtieth year of publication.

One of the greatest joys I’ve experienced in the wine business is the relationships that I’ve been able to build within the wine writing community. Ronn Wiegand MS and MW, of Restaurant Wines, is right up there with the best.

Besides being a professional wine taster, author, lecturer, publisher, and consultant, Ronn’s judged wines in competitions in the USA and Europe; tastes thousands of newly released wines every year; and publishes one of the best wine newsletters in the world today, Restaurant Wine. Restaurant Wine is a professional business newsletter for the hospitality industry. It is the only publication of its type in the world. Restaurant Wine provides ideas and cutting edge information to help members of the hospitality trade run more customer-friendly, professional, and profitable wine programs.

A native of California, Ronn began pursuing a career in wine in 1975, as sommelier at San Francisco’s renowned Clift Hotel. He moved to London, where he worked for a wine merchant and wine bar operator, then joined a startup educational wine company in Hawaii. In 1980, he became a resident of the Napa Valley. In 2011, he moved back to Europe. A widely published writer, his articles on wine have appeared in dozens of publications, including Vogue, Decanter, Connoisseur, Restaurants & Institutions, Hotel & Resort Industry, Restaurants USA, The Wine Spectator, Wines & Vines, Wine & Spirits, and [the former] The Wine News magazine, located in Coral Gables Florida. 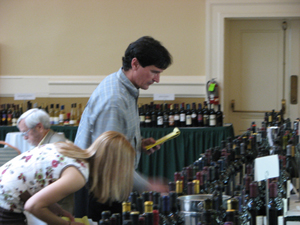 ★★★★★ EXCEPTIONAL quality for its type and style; a superstar (5 stars) within its price category. Merits an extra special effort to purchase. Very highly recommended.

★★★★ EXCELLENT quality for its type, style, and price. Among (4 stars) the very best of its type for its price. Highly recommended.

★★★ VERY GOOD quality for its type, style, and price. Has (3 stars) distinctive character and positive attributes. Recommended. Unusually smooth for the wine’s type and age, and a good wine by-the-glass choice.

Although Ronn’s moved from Napa to Europe, the bond continues for this bright and talented man. With his moving to another part of the globe, it’s been great fun to watch his perspectives broaden, as well, from his new life experiences. He returns about three times a year to taste US wines, because most wine brands are hard put to be sending wine samples abroad for review. Returning to get his work done, as Ronn in now doing, he continues with his success for everyone in the process. Coming back to taste also means that his life’s work doesn’t skip a beat, and is broader than ever.

For some perspective, this is Ronn Wiegand’s tasting method:

“I try to taste 30 per day, in eight hour segments. This means around 4 per hour; not 20 an hour, as others claim to do. I actually taste and think carefully about every single wine.”

An Update on Ronn Wiegand’s Life in Europe

Ronn Wiegand married Hajnalka Pracser, which put him into an important, Hungarian winemaking family. Hajnalka’s parents are Erzsebet Pracser and Miklos Pracser, who own a tiny, high quality estate in Tokaj, Hungary, called Erzsebet Pince (Elizabeth Cellar). In 1992, Erzsebet was the person responsible for starting the family’s estate winery. Both Erzsebet and Miklos have degrees in agronomy, with a wine specialization. And, they’ve been winemakers in Hungary’s most famous wine region, Tokaj, since 1974.

Admirably, Erzsebet was the first woman to do so in the region, after the change-over in governments. Elizabeth, whom the winery was named after, was manager and winemaker from 1993 to 2007. The father (now semi-retired) is head of the Tokaj Winegrowers Association, and tends the family’s 25 acres of vines. Ronn’s brother-in-law Miklos Pracser II, also has a winemaking degree, and became the family’s winemaker, when he took over for his mother in 2008.

Ronn complements their structure by assisting on all quality control issues, and does all the final blends. It is not a big job, according to Ronn, since the total annual production is an annual 800 to 900 cases (10,000 bottles). Since Ronn first began lending a hand, in 2008, wine quality at the estate has roughly doubled.

I’ve always been in awe of Ronn’s trained palate. Now, his evolution within the wine business is close to many people’s dreams. Ronn Wiegand’s focused, brilliant palate is one that we all can trust, in my humble opinion.