I received the following information from David Prum, about PhytoCat Irrigation Cleaning. David got my attention.

The following information has a lot of merit. Imagine successful irrigation cleaning without caustic chemicals? This new irrigation system goes straight to being really clean, without anything corrosive in the process. The savings to longevity of your vineyard workers’ hands and equipment that they use, will make everyone happy campers. Thinking about sustainability is just good business, I’m sure you know. The less chemical intervention on every level, the healthier for everyone. The same holds true for sustainability of a winery. And, we also have to think about supporting the people who manage vineyards and wineries. Honestly, think about it… Without people, there is no sustaining of anything in a vineyards or winery. It makes me very uncomfortable to think that peroxide burns into workers skin, right? There must be a better way, and there is a better way, from what I’ve seen in these photo-2-videos.

What if a micro-irrigation system could run clean all year, without flushing or applying acids?  Several wine grape growers in California say they have found a way to make it happen and it means savings in time, equipment, water, and a safer work environment.  These farmers are replacing the traditional irrigation cleaning regimen of acids, flushing, and scrubbing, with a treatment of fermented organic plant materials that produces extremely reactive micro-bubbles.

Since its invention in the 1960s, drip irrigation technology has revolutionized agriculture – reducing water consumption by 30 to 60 percent and increasing crop yields by 20 to 50 percent.  But none of these systems work with perfect efficiency in the real world, because of the chronic problem of bio-films and mineral deposits. Bacteria grow in nutrient rich irrigation water and secrete “slimes” that act like glue binding together minerals in the water, into deposits which clog drip emitters and water filters.  When irrigation systems become clogged they fail to distribute water and nutrients evenly.  The acidic and caustic chemicals used to treat bio-films and mineral deposits are dangerous for farm workers and largely ineffective.

The new, non-toxic cleaning treatment is called Phyto-Cat; it breaks up the bio-films and mineral deposits that often clog emitters and filters. The micro-bubbles it generates super saturate the water and adhere to bio-films.  A rapid oxidation takes place and the bio-films and mineral deposits are shattered and washed into the soil, where they become nutrients for the beneficial aerobic bacteria in the soil.

Phyto-Cat was developed by Bio-Organic Catalyst Inc. of Costa Mesa, California, to accelerate the breakdown of compost in soils.  “The evidence of benefits for plants is very strong,” said David Prum, of Bio-Organic Catalyst. “But one thing is clear;  every emitter, in every system treated with Phyto-Cat, runs perfectly clean throughout the growing season.”

Vineyard manager, Mark Seifert began using Phyto-Cat in the spring of 2017, at Sebastiani Vineyards in Sonoma, California.  “When we flush our irrigation system, our guy has to go through and undo all the ends of the drip lines.” Seifert said. “You’ve got hundreds of miles of irrigation lines that need to be undone.  That’s a lot of hours our guys could be doing more productive things in the vineyard.”

After treating with Phyto-Cat, at the beginning of 2017, Mark Seifert didn’t need to flush out his irrigation system once, during the entire growing season.

In 2016, Chalone Vineyard, in Soledad, was the first vineyard, or farm of any sort, in California to use Phyto-Cat in its drip irrigation systems.  Richard Boer, the vineyard manager at Chalone, reported immediate and dramatic results.  “We put in one quart per acre, injected it into the irrigation system. We let it sit overnight and then we flushed it as we traditionally do. We got more gunk out of the lines than we ever had in the past.”

When Boer started up his irrigation system again in the spring of 2017, he found that the whole system had remained completely clean over the winter. “Every drip line that I’ve opened this year has been clean, and we haven’t cleaned out the system at all since last year (2016) at shutdown.”

The irrigation system at Chalone Vineyards is equipped with a set of three large sand filters, designed to automatically back-flush, when the pressure differential between the incoming and outgoing water reaches a preset limit.  Throughout the 2017 growing season, the pressure differential on the filters at Chalone remained near zero and never triggered a back-flush cycle.  Richard Boer explained, “It costs us about 700 dollars an acre foot to pump the water from the valley floor to our property before we even put it in the reservoir and irrigate with it. Each time the filters flush, they flush probably 2,000 gallons of water. So, if we can save water, we’re saving money.” 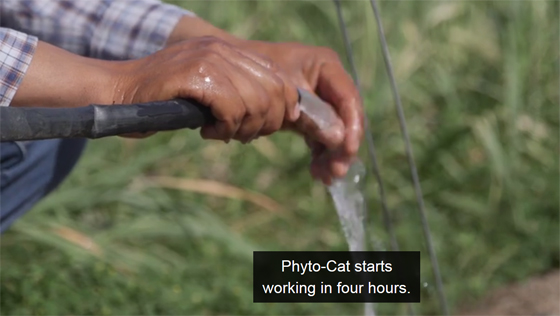 Before 2017, Tarcisio Carona of Sonoma County, California used an organic peroxide to treat the iron chelate bacteria in his irrigation water.  Kneeling down beside one of his clean drip ends, Carona collected some of the water in his hand and smelled it. “When I used peroxide, you couldn’t touch the water like this, or you’d burn your skin fast.  But, with Phyto-Cat, you can do that.”

Carona added, “I’m surprised because we had a 3-years experience with the peroxide, and I never saw any difference in the water. I only saw it on my hands, because that chemical burned my skin.”