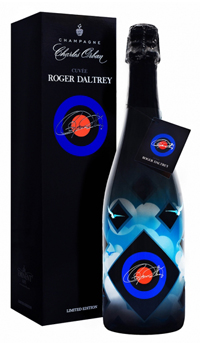 In May of 2016, The Who’s Roger Daltrey created his own Champagne, to launch 50 years of the band. That was one to pop a cork over, right? This wine was made in collaboration with Charles Orban, in celebration of “The Who Hits 50!” tour. ” Called Cuvée Roger Daltrey, it was produced by Champagne Charles Orban. Roger wanted to do something special for their fans, and is there any better way to celebrate that milestone, than with a bottle of bubbly?  From ThedrinksBusiness.com: “Daltrey said in a statement. ‘I took my inspiration for the bottle from the Tommy album cover which is a favorite of mine … the album that cemented our legacy. I can’t wait for everyone to try it.'”

Proceeds from sales of Champagne Cuvée Roger Daltrey ($128/bottle are still available at Eminent-Life.com. The proceeds are meant to benefit Teen Cancer America.This organization was co-founded by Daltrey and Pete Townshend.

Roger Earl, Foghat’s drummer, is making Santa Maria Valley wines, under his own name of Foghat Cellars. Right now the site has all older vintages. I’m left to wondering if  if this was just a one hit wonder, like so many others I’ve seen in this career. It’s only Rock and Roll, but do “I like it”? When one is a star in a primary career, and they enter the wine business, it’s assumed that this is going to be an overnight sensation, via family, friends, and fans as in the case of Rock in roll. This hasn’t been the case for rock and rollers, though. Wine is a separate audience, and that one needs just as much promotion.

On the Website, he’s got a Cab, a  Pinot Noir, and a Chardonnay. Rocker knows how to rock, but when they roll into the wine business, it’s a completely different animal, as I learned when I segued from Rock radio into the wine biz, too. Stage presence isn’t something that farmers easily grasp. (Just try being their publicist, and convincing them they need to come into the spotlight.) This was a collaboration between the Roger and Linda Earl and former Talley Vineyards winemaker Steve Rasmussen. This all came together in 2007, when Steve was inspired after seeing Foghat perform at the California Mid-State Fair in Paso Robles. when he approached the Earls about having a Foghat wine, the Earls decided to go for it and work with Steve Rasmussen to create Foghat Cellars’ first vintage, first bottled in 2008.

When I first came to wine country in 1992, I was a freak. Just coming out of rock and roll radio, that was the only PR I knew; and yet, I wanted to segue into wine PR. In my early wine PR career, I actually had the audacity to call a Napa Valley wine writer icon. I got a recording, so I left a message. I promptly had an assistant return my call, to tell me that I must never call this person again.. Today, I’m very familiar with both kinds of PR (radio and wine). I also knew back then what is finally coming around today, as evidenced by Wine Enthusiast’s releasing a magazine, with a focus on… you guessed it… The Music Issue. Tag line Welcome to our celebration of one of life’s best pairings. Yeah! I’m so pleased to see that my years of promoting this genre has finally come to national attention fruition.

Things I’ve promoted, including this image I created with a guitar inside of a bottle, have been a blast. I did a copyright on this image, because I’ve seen many of my epiphanies get taken as their own by others. This one, I wanted to preserve; because, some things just have to belong to the owner of the concept, (copy)right?