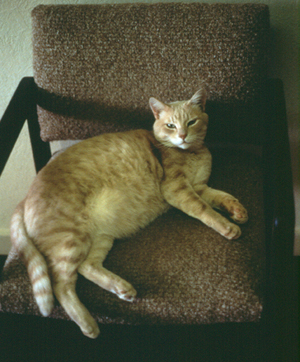 When I began to read about the Pedroncelli Winery’s celebrations for their 90 year anniversary, I was thrown back in time, remembering when I first came to meet Julie Pedroncelli. It was in the early 90s, and I had begun Cat O’Wine Tales. (I was out photographing, for what would become a feature story in The Wine News ~ Coral Gables, Florida). Julie had a great winery cat named Tilly, at the time, which I photographed while it lounged in her office. I’m not sure of the name of the one on their stone wall, but Julie will recognize it, so it’s fun to share. I immediately enjoyed Julie’s down-to-earth demeanor and kindness.

Her family then became a member of PS I Love You, when I started the group. And Pedroncelli Winery has remained a loyal supporter, for the last 15 years. If you know about Petite Sirah as a variety, the Pedroncelli family is one of the founder members. They believe in community and education, so you can give them a thanks, Petite Sirah lovers (and you know who you are.) Pedroncelli wines are very well structured and wholesome, and created in a beautiful area of Dry Creek Valley.

POINT OF REFERENCE: Dry Creek Valley is on…

That was a painful moment, because Sonoma County had lost one of its early pioneers. I wrote:

“John Pedroncelli was one of those quiet leaders; you know them, they’re the most in tune with harmony…We’re all going to miss John’s direct involvement; however, his kind heart and business acumen will continue. It is said that we remain alive as long as one person still thinks about you… John Pedroncelli will remain in my heart through eternity, and I know that Jim and Julie’s families feel the same. We’ve lost the body of a great man and wine leader, but not his enduring spirit.”

At his winery’s memorial celebration, my heart was so touched when I found my words on a card for guests to take home with them. It was a further connection of love for this humble, yet prominent, family.

And now they’re celebrating 90 years of living and working within the Geyserville community… A community which I now also call home. As I look across to Alexander Valley and the Pedroncelli’s neighborhood, I feel such a strong connection.

The Story From The Winery

The Pedroncelli family is proud to announce the 90th anniversary of their multi-generation winery. Ninety years ago Giovanni and Julia Pedroncelli were drawn to a small property in Dry Creek Valley, Sonoma County, being offered in a distress sale.  The property included 25 acres of vineyard, a shuttered winery and a home. With memories of their native Italy drawing them to the area, they were willing to buy a winery property mid-prohibition, one of the many “firsts” of the Pedroncelli legacy. They spent the years leading up to Repeal selling grapes and, working together, they forged a family business which today spans four generations with the fifth learning about farming from their grandparents and great grandparents.

As early entrants on the Sonoma County wine scene, there are many firsts for them from welcoming visitors to taste wines in the cellar in the 1930s to placing Sonoma County on the label in 1940s; becoming the first to make a Rosé of Zinfandel with more than 60 consecutive vintages and among the first to plant Cabernet Sauvignon in Dry Creek Valley. The Pedroncelli’s were early adopters of incorporating small oak barrels and temperature controlled stainless steel tanks in the cellar and the first in California to start an independent sales & marketing network. The pillars of their success are family, farming and their flagship wines Zinfandel and Cabernet Sauvignon.

As third generation family owner Julie Pedroncelli St. John puts it, “I feel a great deal has been accomplished by my family and we could not have done it without the massive support network of our customers, staff, grape growers and distributors (many are multi-generational as well!) whom have given their time and attention to our wines.”

Members of the Pedroncelli family will be working their way through 90 cities as they market wines and host dinners across the U. S. and beyond, all with a special attention given to their 90-year history and glimpses of what’s to come in the next 90.

Now, we’ve come to November, in Pedroncelli’s 90 years of celebrations. No one expected the fires that many of us have all just experienced.  In true gracious and empathetic style, Julie Pedroncelli and her family continue their community involvement and service, with the emphasis on their community as a family effort.

October will go down as a month to remember—before the fires and after the fires; while family, staff and the winery itself were unharmed by the fires there are parts of Sonoma, Napa, Mendocino and Lake counties, which have been severely damaged by the firestorms. We picked our last load of grapes on September 29 which was 10 days before the fires. We are participating in an ongoing program for CA Wine Strong of donating $1.00 a bottle of our wine sales, and hosting a Redwood Empire Food Bank barrel for donations-either food or monetary. Much of what we’ll do for the next decade or more is to help rebuild and support the renovation of the devastated areas in the 707 area[code].