Rutherford Dust Society ~ Always Something New to Learn and Enjoy

In 1993, the Rutherford American Viticultural Area (AVA) was established. The Rutherford Dust Society was then established in 1994, by growers and vintners, to support a cohesive educational program going forward. Total acreage for the AVA is 6,840, while 4,371 acres are dedicated to vineyards. Cabernet Sauvignon is the major planting, by 67 percent. This region is an epicenter of California’s world famous Napa Valley Cabernet… The same Cabernet that causes grown men to lust, and grown women to emulate… sensual, smooth, and worth aging for the long haul.

The Rutherford, Napa Valley Appellation is both the geographic and historical center of grape growing in the Napa Valley. Approximately six square miles, the appellation includes more than 30 wineries and more than 60 grape growers. Vintners and growers founded the Rutherford Dust Society in 1994, whose mission is to encourage and promote the highest quality standards in grape growing and wine making in the Rutherford Viticultural Area, and gain recognition for this quality through education of the membership and public. www.rutherforddust.org 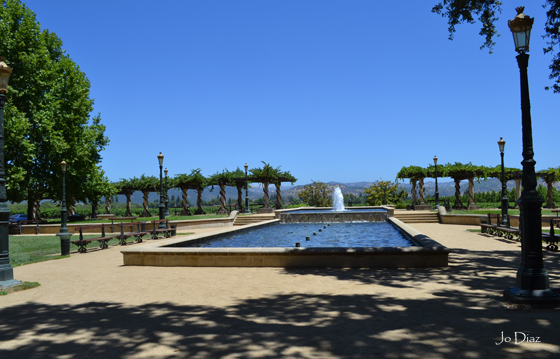 Each year, the Rutherford Dust Society has educational events, not only for consumers, but also for trade. Each time I attend an event, my appreciation and knowledge for the Rutherford American Viticultural Area (AVA) continues to expand. It’s always based around tasting the wines of the latest vintage, while the season is explored by winemakers and grape growers from the AVA; because – in the season – lies the truths of weather nuances.

In 2002, a subcommittee to the Rutherford Dust Society was established. The intent was regarding preservation, which is very impressive. From the Dust Society’s site…

To manage and restore the 4.5-mile stretch of the Napa River, and its watershed, which flows through the Rutherford American Viticultural Area (AVA) between the Zinfandel Lane Bridge and Oakville Cross Road. RDRT (or “Our Dirt”) seeks to:

A  Day in the Dust was the event that I attended this past July, at Francis Ford Coppola’s Inglenook Winery, in Rutherford. It’s such a beautiful location. Every time I visit, it’s consistently breathtaking.  This year’s agenda was to dig deeper into the Rutherford Dust, with an exploration of the three distinct zones of the Rutherford appellation.

For those who don’t know, Napa Valley was formed by two plates coming together, which shape the Mayacamas Mountain ranges; while the Vaca Mountains (subsequently called the Silverado Mountains) were formed by volcanic activity. So, each side has its own type of soils… Mayacamas brought up ocean sediments and salinity, Silverado Mountains have iron oxide in its soils… The iron oxide character produces spicier wines, like a great Zin with lots of oomph. The Rutherford AVA does not go into the mountains, on the east side of the valley, so that spice isn’t part of the Rutherford Cabs, when I’ve tasted them.

I was able to taste a Rutherford Cab from each of these zones. Trevor Durling was the winemaker, who used the same barrel program, which allowed for the identification of the unique flavor profile from each distinct zone of the Rutherford AVA. This was followed by a tasting of the following Cabernet Sauvignons: