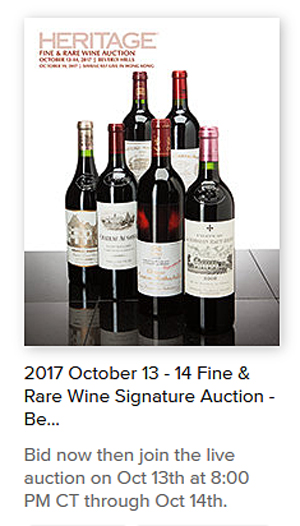 My recent blog post, entitled In Vino Duplicitas ~ The Rise and Fall of a Wine Forger Extraordinaire has signaled, evidently, that I now have an interest in wine auctions. And, I do for purely voyeuristic enjoyment. I’ve thought about going back and reading the book again, to create a “Most Wanted.” list.  (I think I will. It was hard to put the book down, actually. Reading it again will give me so many interesting facets tot he world of wine as a collectible, versus a commodity.)

So, today, I just got a great E-Mail press release. I’m sharing for your pleasure, or for your own curiosity. And, just in case you’re not in on what’s the hottest wine in the world, it’s a DRC ~ Domaine de la Romanée-Conti, with lots of close seconds.

This is from an intriguing press release:

Enjoy the world of wine: not for commodity ~ but for collecting

More than 1,300 lots, of the best of Burgundy, Bordeaux, and more, are poised to surpass $2 million, when the gavel falls October 13 and 14, in Heritage Auctions’ Fine Wine Auction in Beverly Hills, California. It’s going to also be simulcast to Hong Kong.

Riding the wave of momentum generated by Heritage’s September Single Owner Sale, The Romulus Collection: Rare Burgundy from a California Gentlemen which was 100 percent sold at nearly double its presale estimate, the October auction will feature 250 lots of First Growth Bordeaux, 40 lots of Domaine de la Romanée-Conti, and 30 lots of Screaming Eagle, among others.

“The Wine market has been very strong through the spring and summer, leading to some exceptional results at our previous auctions,” Heritage Auctions Fine and Rare wine Senior Director Frank Martell said. “We expect that trend to continue at this event.”

Several important private collections are featured in the October sale, including one owned by Tennessee Titans owner Bud Adams. A noted philanthropist and businessman, Adams is an ardent wine collection and several lots, such as Château Lafite Rothschild 1982 Bottle (12) (est. $22,000-30,000) are on offer.

Other top lots are expected to include, but are not limited to the following:

The Internet’s most popular auction-house website HA.com has over one million registered bidder-members, and searchable free archives of four million past auction records, with prices realized, descriptions, and enlargeable photos. Reproduction rights routinely granted to media for photo credit.