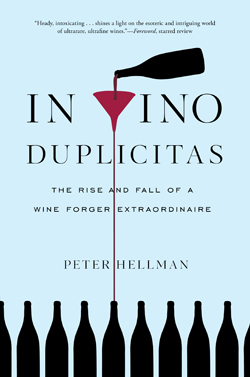 In Vino Duplicitas ~ The Rise and Fall of a Wine Forger Extraordinaire, written by Peter Hellman… From the very start, it will suck you in and have you turning pages for more. Highly prolific author Peter Hellman has detailed the steps taken by the world’s largest wine con man, ever.

In the world of wine, there are two divisions… commercial and collector. This story is about the surreal world of collector wines, and its cast of characters. (Bill Koch is my favorite. The glimpse into his personality, honestly – he’s a quirky, funny guy, on top of all else we know about him.)

As you read the book, take notes of wines on the collector circuit. (Great guidance, and you’ll know what your dream list would be.) Somehow, Rudy Kurniawan came onto that scene; and either swiftly progressed, or slowly connived his way, into a very exclusive club. It eventually got the best of him; stages are intriguing.

About the rise and fall of the most unlikely wine con artist in the history of wine conning, Rudy Kurniawan‘s elaborate fleecing of the upper crust of society is fast paced and filled with all of the juicy details. How did this seemingly charming young man, of undisclosed finances, come onto an exclusive wine scene, and use his penchant for generosity to ensnare his billionaire marks?

On April 25, 2008, Hellman was present at the Acker Merrall & Condit auction. This was when Laurent Ponsot, a Burgundian winemaker, was compelled to have a removal of several of his domaine’s wines from bidding. The consignor of the Ponsot wines that were in question was… Rudy.

In  all of history, no one has done it better or worse, than Rudy Kurniawan

Hellman’s example is when grown men were know to cry as they tasted a 1914 vintage of Champagne “…in the depths of a limestone cellar in Épernay in the heart of bubbly country… It was a the 1914 vintage, “For this there are no words. Only the tears of grown men.” I’ve always thought that a 1945 Château Margaux would be delightful, and now I’m adding a 1945 a bottle of 1945 Romanée-Conti to the list.

Rudy Kurniawan: “No, I’m broke. I scam people…Kurniawan has declared a truth, confident that those around him at the table will take is as a joke.” p. 19

And, I thought that I had Juicy Tales…

Peter Hellman is a contributor to Wine Spectator, a prolific author, and, a journalist who’s been on the front line of Rudy’s story, from its very beginning.