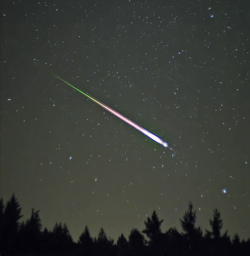 On August 12, my husband and I went outside, pulled up the lawn chairs, got under our blankets, and watched the night sky. We were hoping that the meteor shower would be spectacular. It didn’t disappoint, with one brilliant, gigantic streak that had entered our atmosphere and shot across the sky in a major way. We both gasped, it was so incredible and scary at the same time. If that one had landed anywhere, it would have left an enormous hole. But, it did taper off, and left us with a once in a lifetime, united memory of star gazing… Seriously, it looked just like this, minus the colors. It literally took our breath away.

Adventure, looking into the skies, versus staring at mobile devices

Astrology, before astronomy, was the work of sage beings. Astronomy is now the other side of those who interpreted… Go back 3,000 years: planet alignments were the only evening entertainment. The predictability of the stars and planets aligned within about 360 days, a complete circle and the consequences were predictable. Hence, began history. If I didn’t know what was happening on the twelfth, and I had never seen anything like that before (and I haven’t) I would have been scared to death. What was the sky sending us, I would have wondered. Today, we have recorded events, so the momentary fright of the night dissipated as quickly as the comet.

Now, we have the next exciting celestial happening… the Solar Eclipse on August 21. I’ve been hearing people getting ready for it by having eclipse parties, traveling to the West Coast of Oregon that would help them to see it better (with protection, of course). It’s got people stirred up and that’s always fun, right?

USA Today: “Starting on the West Coast in Oregon, the USA’s total solar eclipse on Aug. 21 will trace a 67-mile wide path east across the country, finally exiting the East Coast in South Carolina.”

When Concha y Toro Frontera After Midnight Red Blend and Moonlight White Blend arrived more than a month ago, I knew I wanted to wait until we got a lot closer to the solar eclipse on August 21, instead of reviewing them right away. Not easy to wait, but they’re so specific. Why waste good marketing? So clever, in fact that really black glasses for viewing the eclipse also accompanied the wines. That one I have to think about. Lately I’ve been having eye strain. I’m on too many devices and my eyes are burningly telling me so.

Frontera Night Harvested wine blends are part of an innovative winemaking concept: wine grapes are harvested in the cool of the night, because they create wines that have bolder flavors and aromas. Both the Frontera Midnight red and Frontera’s Moonlight white were inspired by the moon. They like to say, “Made by the night – enjoy the nocturnal side of Frontera!” 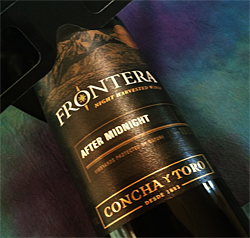 So, let’s get to our Wines for the Week (and event)

The varietal composition of Frontera’s After Midnight is 55 percent Cabernet Sauvignon, 40 percent Syrah, and 5 percent Merlot. Big from the Cab’s rich, black currant flavors, earthy notes are from the Syrah, and plummy black juice comes from the Merlot, this wine is drippingly good, without being complex and brooding. Remember the price for this wine is under $10, so as a house wine, it’s great for everyday… And, if you’re having a huge eclipse party, this one won’t hit your pocketbook hard. Have a group BBQ, put a bit of it in your sauce for a seamless experience, and get ready to be wowed in the middle of the day.

(For vegans, make sure they have Portobella mushrooms for you. This wine and Portobella… As Meridith May would say, enjoying deliciousness, kiss kiss.) 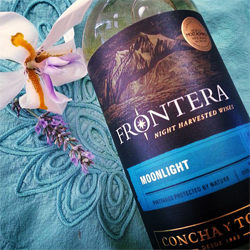 This one is 85 percent Moscatel de Alejandría and 15 percent white (undisclosed) wine variety. Moscatel, like the Symphony grape, is more of a semi sweet wine. So, expect some sweetness to this one. Let me tell you, after having worked with the Symphony grape for so many years, when a wine has a sweetness to it, it makes for a great SALAD wine. Yeah, wine with a salad. Also great with fruits, BTW, but let me tell you how this works with a salad.

Whatever you do for the upcoming Solar Eclipse, get ready for a good time! It’s going to be heightened energy; and I, for on, intend to cash in on the sun fun!