Wines of the Week, from Casillero del Diablo from Chile

A Red and a White, under Blue skies… What more can we ask of summer?

Good wine, you say? Yeah, I’m with you on that one. 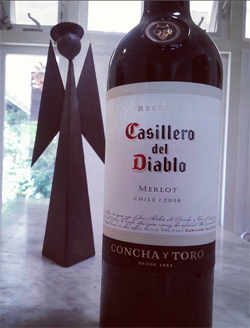 A classic, New World-styled Merlot, with lots of magic in this bottle of wine, I was reminded of the days when I lived in Maine. Jose and I would go to our favorite wine shop. He’d ask, “What’s this one like, Audie?” His constant answer was, “Great wine for the money.” As I think back, he must have filled his shop with only “great wines for the money,” because it didn’t matter what we’d choose and ask… regardless of price, variety, regionality… it was always great wine for the money. That was about 30 years ago. I’m betting that we’d find Casillero del Diablo wines on his shelves today.

A delicious Merlot, get ready for your favorite, hearty dishes, because this one will balance out any of the fats in your foods… Beef and/or cheese dishes… Even a hearty grilled cheese sandwich will be made splendid, with the dark berry, cherry flavors of this Merlot. And, I can also see it with a Yankee pot roast that’s been cooking all day, with a few dollops of Merlot placed into the crock pot for seamless flavors. (Cook with a bit of the wine you’ll be enjoying, and it will be smooth consistency.)

In the nineteenth century, when Don Melchor began Concha y Toro, he discovered that his workers were sampling his greatest wines. Spreading the rumor that his cellar was the cellar of the devil (Casillero del Diablo), that put a quick stop to the thievery. The winery likes to think of it as stored in hell, but made in heaven. I like the picture I took, as it depicts what Don Melchor knew… You can’t keep people from what’s devilishly delicious, until it leaves the devil’s cellar. 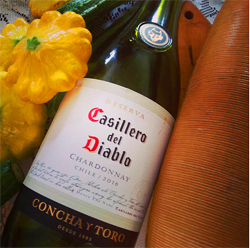 Red, white, and blue are made even better when Casillero del Diablo is also part of your plans. Straight up: This is a lot of wine for only (about) $11.00 for each wine. When I’m traveling outside of the US, and I see Casillero del Diablo on a shelf, I don’t need to search any further.

This Chardonnay is consistently solid, from one year to the next. Bright fruit, well balanced acids, tasty apple flavors, and a perfect compliment for your favorite dishes calling for a white wine, Casillero del Diablo delivers all that and a lot more. It’s a wine you can trust for getting more than you paid for… or expected, for that matter.

Being polar opposites, it’s long been thought that quality and quantity are mutually exclusive of each other. Marcello Papa has found an internal ingredient in his own being, which seamlessly unites the two concepts of qualtiy and quantity into harmony through his endeavors. Given high-end technologies, he’s taken each part of the process, and united them, for the good of making solidly crafted, affordable wines. This thinking has made Concha y Toro’s wines a world leader. Hands on equipment in the right places still keeps the wines in a delicate balance.

Marcello has  been with Concha y Toto since 1998… Coming onto 20 years of being in one place has great advantages, including high end consistency of whatever’s being made. In this case, it’s wine and the balance is perfectly delivered.

What I’ve also learned along the years now of tasting their wines, the wines coming from Concha y Toro are delivered by a team of winemakers who all live well-balanced lives. From his bio:

As with a number of Chile’s top winemakers, Papa earned a degree in agriculture and a post-graduate degree in enology from the highly regarded Catholic University in Santiago. He was subsequently recruited by Kendall–Jackson, where he spent the next five years before joining Concha y Toro in 1998. In 1999, a year after working on his first vintage of Casillero del Diablo wines, Papa was given the additional assignment of working on Concha y Toro’s prestigious Marques de Casa Concha wines, and named chief winemaker of Concha y Toro’s Puente Alto cellar. Under his direction, Marques de Casa Concha wines have earned some of the most vaunted accolades in Chilean winemaking.

I didn’t know this about him, until just now, while looking at his on-line bio. It backs up what I’ve just written above:

In 2005, Papa captured Chile’s highest honor, when the Chilean Wine Guide distinguished him as its “Winemaker of the Year.” It was a remarkable tribute to his diligent work on the Casillero del Diablo range, referencing Papa’s capacity to “create exceptional wines that are widely available in the marketplace, yet achieve extraordinary levels of quality in spite of large production levels.”