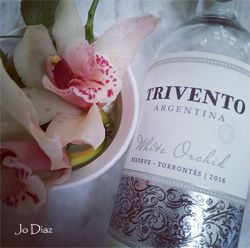 Yeah, blueberries… When I tasted this luscious wine, we had just purchased some blueberries from the farmers’ market. They were just sitting on the counter, where I was tasting. After I had professionally tasted the wine, thinking I was finished, with hunger nagging, I reached for some blueberries. I was astonished! Twenty five years into working with wine, comparing and tasting with foods, it never occurred to me to actually simply eat fruit while enjoying wine.

As I reflect on Mendoza being a Spanish country, I decided to find some Argentinian music to listen to, while I write… Make our journey more enlightening.  Okay, so here we go… (The image above will take you to Spotify. Just search on Luis Mendoza… so appropriate.)

Think of appetizers… Ever seen blueberries being passed around?

Entrees? Any blueberries there as a regular feature?

Dessert wines stand on their own.

Never, in all of this time have I ever reached for, or been offered, blueberries and wine.

Try it, you’ll like it, she said… if you like blueberries and you like white wines. I ate the entire pint of blueberries, while enjoying what was left in my glass.

Primarily know for its Malbec, Mendoza also grows a wide range of other wine grapes, and Torrentes is its signature white… Remember Joanie Mitchell’s, “I could drink a case of you?” Yeah, that comes to mind. This wine has a floral nose that you just want to dive into. It’s as crisp as ever, and it’s mouthwateringly refreshing. It’s my favorite wine to have with any ethic food, as a perfect complement. The heat, the touch of floral… Simplemente perfecto!

Bodega Trivento is a large winery, located in the Argentinian province of Mendoza. It’s large enough, for instance, to have a team of four winemakers. Each winemaker description below is part of the winemakers’ biographical sketches, from the Trivento website:

Germán Di Césare began to oversee the production of Trivento’s premium wines, in 2009. Those premium wines include Golden Reserve, Amado Sur, and Brisa de Abril. You know when you ask someone, what do you do to relax? Germán is also “an authority on traditional Mendozan culture. He’s a fantastic folklore singer, skilled dancer and a mean cook, specializing in the local cuisine.”

Victoria Prandina was brought onto the team to add to the feminine side of wine’s flavors. She’s responsible for Eolo wines. In her free time, Victoria enjoys a day in the countryside, a ride to the mountains, and the pleasant company of a good book.

Rafael Miranda’s passion for winemaking was passed on from his father Luis, who was a professional winemaker and general vineyard and agricultural enthusiast. Rafael can be found playing with his children in his spare time. He’s a great drinking mate among family, enjoys a traditional Argentinian barbecue with friends, and loves being in the thick of a friendly football match.

Maximiliano Ortiz is responsible for overseeing their premium wines while its in oak barrels. His charm and charisma also make him an obvious choice to lead tastings for clients and special guests at the winery. Maxi is a devoted sports fan, plays football in his free time, and anxiously looks forward to Sundays—a time for supporting his team among friends.

Each winemaker, on this well balanced team, has a life beyond the grapes, the crushing, experimenting, barrel choices, racking and bottling, or being an ambassador… How they balance their lives in play is a reflection of how well they balanced their wines in real time.

Trivento is a wine you can trust!

Torrentes is a wine you can love.