In my humble opinion, wines that come from the Concha y Toro Power House are incredible wines for the price that you’re going to pay for them. I’ll never waver in that belief, after tasting them one-by-one, for the last five years. If you get to know this producer, too, most especially since they’re distributed worldwide, you’ll come to learn that quality is their middle name, regardless of their value prices. 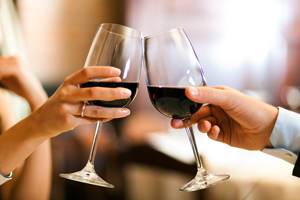 Parent company Viña Concha y Toro is very impressive as one of the world’s largest and most successful wine companies.  Over time, I’ve learned that these are consistently delicious. And, they’re specifically made to be very affordable, so everyone is able to enjoy delicious wines. They offer a fine wine collection, premium wines, and varietal wines. Under each division, there are several options. It’s quite the infrastructure, and its strength leaves a very lasting impression.

The Marqués de Casa Concha wines were created as a tribute to the title of nobility bestowed upon the Concha y Toro family in 1718, by King Felipe V of Spain. The wines are single vineyard, estate bottled wines made in limited production. The grapes come from prime vineyards of Chile. Marques de Casa Concha wines are an expression of Concha y Toto’s tradition, in the art of winemaking. All Chardonnay grapes, for instance, were hand harvested. The greatest care is given to these wines.

The family later moved to Chile, and under Don Melchor, the Concha y Toro Winery was founded in 1883.

Marcelo has a degree in enology from the Universidad Católica de Chile. He’s been with the wine company since 1998, and has been in charge of the range for Casillero del Diablo. A year later, he took on the responsibility of Marques de Casa Concha, which is one of the best known and traditional brands of Chile. In a Decanter story: A wave of vine plantings in new regions is making Chile one of the most dynamic wine producing nations in the world, Concha y Toro winemaker Marcelo Papa has argued. I’d say he’s probably right… 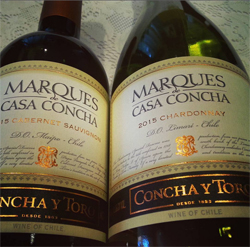 This Chardonnay is totally delicious, and was wonderfully refreshing. I tasted it on a 100 degree day, just before June turned from spring into summer. So delicious, in fact, that I needed a bit of restraint. I had to grab a glass of water, reminding myself that it went down that easily. At that time, I didn’t want my tasting to get lost in what it was… a tasting. I enjoyed the rest later with dinner. Not a drop of this one was wasted…

The 2015 Marques de Casa Concha Chardonnay is from the Denomination of Origin (D.O.) Limarí, Limarí Valley; more specifically, from the Quebrada Seca Vineyard. The Quebrada Seca Vineyard is 623 feet above sea level, and just 12 miles from the Pacific Ocean. It sits on the north bank of the Limarí River. The clay soils are rich in calcium carbonate. Cold and cloudy mornings allow the fruit to ripen slowly and produce refreshing wines. The vines are Chardonnay clones 95, 76, 548, and Mendoza clones. They’re trellised to a vertical shoot position. The Soil’s first layer is clay, followed by alluvial soils, which are composed of a large amount of calcium carbonate. The climate for this vineyard is cool, and is heavily influenced by the Pacific’s cool, ocean breezes.

A wine to bring home, when you’re out and about looking for delicious Chardonnay. It costs about $22.00. 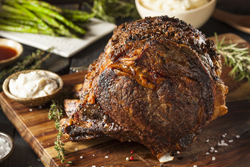 Ruby slippers, with dark cherries and black raspberries… Hints of a summer love developing, that a turning of seasons into fall won’t put asunder. You’ll carry this one, if you’ve not yet tried it, into more than a love affair… It’s a marriage of a house wine, when family and friends gather. Prime Rib and Cabernet… It’s that worthy. Not to worry about the tannins, the ruby slippers are met with chiffon.