Wine of the Week: Horseback Riding, Building Asadas, what else Germán di Cesare?

All work and no play makes Johnny a dull boy… We’ve all heard that one. How about horseback riding, building asadas, singing folk songs, playing guitar… Germán di Cesare also makes wine… I think we’ve found our balanced, well-rounded winemaker. Do you agree?

Trivento Golden Reserve Malbec (SRP $21) from winemaker Germán di Cesare, is a very cool guy, by all accounts. And his wine shows his perfect balance between art and science, in my humble opinion. He’s been known to attend press dinners where he caps things off with a bit of a sing-along. Now, there’s a party I want to attend. Reminds me of wine writer Paul Gregutt… while visiting with him in Waitsburg, Washington, after a smorgasbord dinner at his place; he broke into song, and we humbly sang along. (My singing voice is pretty shot, by my enthusiasm is not!)

…really caught my attention. You, too? Researched for us.

First of all, I love carne asada, but never thought to look up the Spanish word “asada” until right now. It was a hit-myself-on-the-forehead moment, too…

“The best measure of a wine’s worth is an empty bottle,” says Trivento winemaker Germán di Cesare. 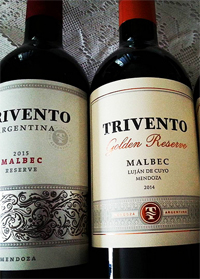 A great entry Malbec for anyone ready for, “What does a Malbec taste like, anyway?” Swirl, sniff, sip, and a big… “Oh, wow!” Trivento’s wines are true to character and ready for hearty fare. The violet flavors linger.

A classic Malbec that’s as rich and delicious as a wine that when tasted by wine lovers, just screams… “Malbec!” This is the one for your friends who know quality, love Malbec, are looking for plum, blackberry, black cherry, and some cocoa flavors.

I wrote: A composition of 79 percent Malbec, 11 percent Bonarda, and 10 percent Syrah, the 2014 Amado Sur Malbec, is one alluring wine. From the Bodega Trivento estate in Mendoza’s Andean Foothills, this Amado Sur wine proves that Malbec has indeed fallen in love with and found its place in the south (sur) of Argentina. An impressively complex wine, this Amado sur, with rich flavors of stone fruit and cherries up front, and almonds on the finish, will rock your palate. It will also fit into most budgets pretty easily. Need a new world “house Malbec?” Look no further.

Trivento, the way to go… for terroir driven Malbec!