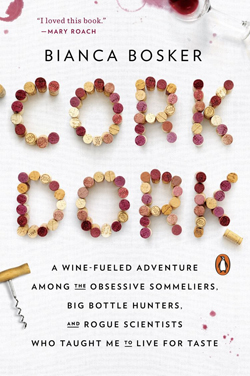 I’m in the middle of reading Bianca Bosker’s “Cork Dork” right now and loving it, said she with no doubts that I’ll also write a review for it.

Recently, a review in a major newspaper had a review of the book, and it wasn’t anything like what I’ll be writing. I’m writing from inside the wine business; not from inside a critic’s mind. One of my Somm pals read the review and felt that reading it might not be worth it. My initial response was, “That’s too bad.” Then, I thought about it deeper, as everyone decided to support the SOMM’s thinking, without having read the book. One person had, and being Napa-centric, I expected exactly what he had written… although I didn’t agree with him.

I followed that with: I’ve begun reading the book, and I told my husband, “yeah, right, what else could possibly be new?” I got sucked in on page i of the Introduction last night… sucked in. It was hard to put down, and didn’t until my dream state was intersecting my reading state. I’m back for my next evening’s readings. I’m acutely aware that critics take that word “critic” as a statement of — ergo, I must criticize. Bianca Bosker is a very clever wordsmith, who is writing the memories of her journey. I’m not a critic, I’m an observer who is looking for a fun read. So far, so good. The end of my journey with Cork Dork will be on my wine blog. Let’s just say, I’ve already got a lot of pages flagged. Whatever her journey, right now I’m all in.

I continued: I’ll let you know. It’s about her journey for being a techie into the world of NYC Somms. Honestly, whatever she’s selling as her own experiences… in that loony town… are most likely real. I wonder if the critic is a Somm?

Then, my thoughts were defended by one more person: Judging from Jo’s report, it sounds like the primary reason this book exists is to entertain, and more power to the publisher and author for that. As I mentioned elsewhere, the distortion of wine information is nothing new in this type of medium. Positive may come out of the fact that many readers may be drawn to wine who otherwise may not have. Yeah, it’s uncomfortable, but I do like the plus side.

It sounds like a fun day in Napa to me!

Bianca Bosker, the author of CORK DORK: A Wine-Fueled Adventure Among the Obsessive Sommeliers, Big Bottle Hunters and Rogue Scientists Who Taught Me to Live for Taste, will be featured at Silverado Vineyards on April 2. Ms. Bosker will read from her new book, answer questions, and sign copies of the book, which will be available for sale. Full of amazing stories, incredible facts, and scientific research, CORK DORK is a charming, informative memoir that digs deep into how improving our senses can help create a more colorful life. CORK DORK has received early praise from among others, Jay McInerney, who called CORK DORK a “brilliant feat of screwball participatory journalism,” and Susan Orlean, who called it “smart and sharply observed … a marvelous journey through the mad, manic, seductive subculture of wine and wine lovers.”

The winery is located at 6121 Silverado Trail in Napa just south of Yountville. Guests will enjoy a tasting of current releases.

Bianca Bosker is an award-winning journalist who has written about food, wine, architecture, and technology for The New Yorker online, The Atlantic, T: The New York Times Style Magazine, Food & Wine, The Wall Street Journal, The Guardian and The New Republic. The former executive tech editor of The Huffington Post, she is the author of the critically acclaimed book Original Copies: Architectural Mimicry in Contemporary China. She lives in New York City.

The account of her year-and-a-half journey, CORK DORK: A Wine-Fueled Adventure Among the Obsessive Sommeliers, Big Bottle Hunters, and Rogue Scientists Who Taught Me to Live for Taste (Penguin Books Original; ISBN: 9780143128090; On-sale: March 28, 2017; $17.00) takes the reader inside underground tasting groups, a Burgundy bacchanal, Michelin-starred restaurants, an fMRI machine, and more as Bosker strives to make sense, once and for all, of our complicated relationship with fermented grape juice.

Compulsively readable, fascinating, and a hilarious exploration of the wine world, CORK DORK includes: Bosker’s training for and entry into the country’s oldest sommelier competition, with hilariously disastrous results (though she does eventually become certified); behind-the-scenes looks at two elite Manhattan restaurants, where she trailed sommeliers and watched the complicated dance of service and hospitality unfold and the science behind how we can improve our senses of taste and smell, and thereby live more richly

More Americans are drinking wine than ever before, yet the rituals, customs, and language around it are as rarefied and opaque as ever, leaving many of us wondering what all the fuss is about. What makes the bottle I bought for last week’s dinner party “bad?” Are sommeliers just pretentious, glorified salespeople, or can they actually taste things like pyrazine and honeysuckle in wine? And why do so many people devote their lives (or life savings) to experiencing minute differences in flavor that most of us can’t even perceive, let alone appreciate? These were some of the questions obsessing Bianca Bosker when she decided to give up her job as executive tech editor at the Huffington Post in favor of tasting wines at 8 a.m., lifting and sorting heavy bottles as a “cellar rat” in one of Manhattan’s top restaurants, and foregoing coffee, spicy foods, and sometimes even toothpaste in order to taste better.

In 1981, Ron and Diane Miller established Silverado Vineyards to make wine from the historic vineyards of their estate. Napa pioneers first planted these ranches to vines between 1865 and 1895. Each vineyard played an important role in establishing the reputation of their growing area: Carneros, Coombsville, Yountville, Soda Creek Canyon and Stags Leap District. The beautiful fruit from these six vineyards is the exclusive source of Silverado Vineyards’ Estate and Single Vineyard wines – the Miller family’s highest expression of the Napa Valley they love and admire.

The winery has recently redesigned its labels. Annabel Rey, the eldest granddaughter of Diane Disney Miller & Ron Miller and eldest great-granddaughter of Walt Disney, created a new line drawing of the winery in 2006 on the occasion of the winery’s 25th anniversary. She recently revised the artwork and it now appears on the 2015 Chardonnay and soon, on the 2016 Sauvignon Blanc, 2014 Estate Cabernet Sauvignon and 2014 Merlot.