Concannon Vineyard ~ where St. Patrick’s Day means so much 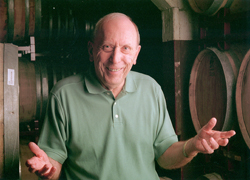 This is why, for me, celebrating St. Patty’s Day has a lot of significance. So much credence is given to the French and Italians for their American viticultural accomplishments… There’s another unpolished facet in the America diamond of winemaking, and it belongs to Irish vintners. From my own personal experiences, my hat’s off to today’s James Concannon’s family.

[Image of my friend Jim Concannon.]

Shortly after the 1849 Gold Rush, family patriarch James Concannon emigrated from Aran Island in the Bay of Galway to Boston. In 1875, James moved to San Francisco. He acquired the West Coast franchise for rubber stamps, and did very well with this business. By 1883, James Concannon had also begun to grow grapes in Livermore Valley, and this is where his family has been ever since.

Following his death in 1911, his sons Joseph, Thomas, and Robert continued the family business. Tom graduated from Santa Clara College with a degree in chemistry, and became Concannon’s winemaker. Eventually, James’s son Joseph and Joseph’s wife Nina purchased all interests in the winery from his brothers and sisters; and, as sole proprietors continued the business until Joseph’s death in 1965. 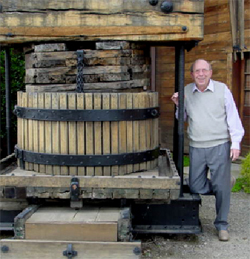 In 1953, Jim Concannon graduated from St. Mary’s College in Moraga, California, receiving a Bachelor of Science degree in business administration. After graduating, Jim returned to the winery, and began to work with winemaker Katherine Vajda, the first technically trained woman winemaker. According to Jim, “I was always deeply inspired by my Uncle Tom. Then, working with Katherine was an exceptional opportunity to learn from one of the most talented people in the business. Between Katherine and my uncle, I was so inspired that I decided to become a winemaker, and took classes at U.C. Davis to sharpen those skills.” Jim Concannon also spent two years serving his country in the Korean War after college. 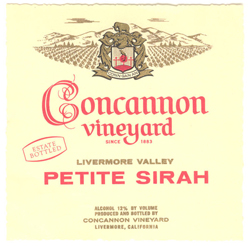 Inheriting the winery in 1965, Grandsons Joseph S. Concannon, Jr. and James J. Concannon continued managing all aspects of the winery. Joe was to oversee all vineyard and sales operations. Jim headed up Concannon’s wine production. As a side note, the Concannon brothers released the industry’s first variety labeled with the name Petite Sirah, from their 1961 vintage in 1964.

A few years ago, the torch was handed from Jim Concannon to his next in line… John Concannon. It was a gratifying moment for everyone in the family, and for, me, too. As I had worked with the winery for about 11 years… Very good years. 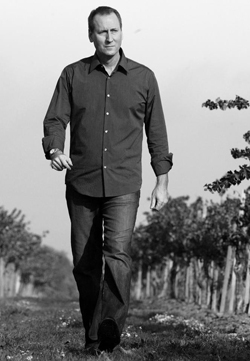 Today, Concannon Vineyard is managed from offices in James Concannon’s original home, just steps from the cellar doors. Grandson Jim Concannon has stayed on at the winery, continuing the family’s legacy, working from his office just steps away from the historical landmark built by his grandfather. Jim is surrounded by a century of wine and family memorabilia, and travels extensively to represent Concannon Vineyard. Jim has given the winery over 50 years of dedicated service. This is the strong Irish ethic that I’ve come to respect.

Happy St. Patty’s Day to all, and hopefully you’ve all made it beyond green beer!