Wine and Other Natural Medicinals

The health benefits of wine are now well documented. I’ll never forget the day when I was working in a tasting room and had just read the The French Paradox. I was discussing it with some visitors; and when they left, the tasting room manager – who was listening in the next room – reamed me. “Don’t you EVER talk abut wine and health, EVER again.” Okay, I haven’t. She scared the bejesus out of me, I guess. So, I haven’t written about it on my wine blog, nor talked about it publicly. By now, though, we all know there’s plenty to support The French Paradox.

Then, there’s marijuana… the one very few of us dare talk about. It was perfectly okay, until Prohibition was repealed. Then, there was talk about how some still needed slaves, so they made marijuana illegal and filled the prison system and put everyone to work making items that the jails could sell for retail process, pay a day’s wage of a few cents – so they were paid, right – and that created a revenue stream. Check out this report in US NEWS.

Today, marijuana has now also been recognized as one of the most natural of all medicinals. Again, there’s building proof to support this, most especially in the essential oils department. My hat is off to Meridith May’s publication The Clever Root.

And… In Days Gone by, These Were the Medicinals of Choice 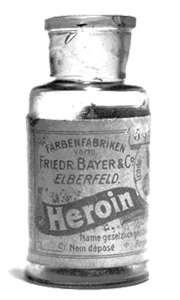 I didn’t realize that at the turn of the twentieth century, wine had the following medicinal uses. This stuff makes medical marijuana look like pablum by comparison. I do believe in medical maryjane, BTW. It comes from nature, and could be managed by the FDA, but I imagine that pharmaceutical companies have a major invested interest in their chemical concoctions continuing to be produced to the exclusion of marijuana. Who knows the havoc chemicals causes our bodies? Can we process that stuff without doing eventual damage to our liver and kidneys? These are the questions I take to heart. Meanwhile, this flash from the past is like walking through a snake oil museum. Enjoy! 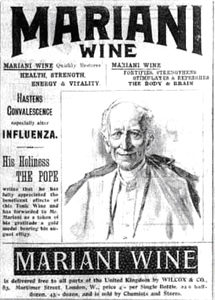 A bottle of Bayer’s heroin existed between 1890 and 1910. Heroin was sold as a non-addictive substitute for morphine. It was also used to treat children with a strong cough. What’s that non-addictive stuff about? Just goes to prove how the marketing arm turns, and what jest it spit out for us to swallow… literally.

Mariani Wine (1875): This was the most famous Coca wine of it’s time. Pope Leo XIII used to carry one bottle with him all the time. He awarded Angelo Mariani (the producer) with a Vatican gold medal. I honestly think that if priests were allowed to marry, all these issues of not being able to face a day as a human being – but trapped in that kind of a body – would just go away. I can say this, as I recover from my youth being spent in a Catholic School. 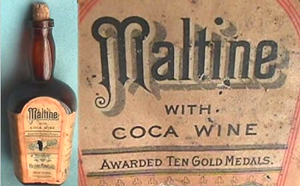 Maltine Coca Wine: Produced by Maltine Manufacturing Company of New York, it was suggested that you should take a full glass with or after every meal… Children should take half a glass. I like the philosophy (for adults, only), just remove the cocaine, please. That’s a bit over the top for functioning after a meal. 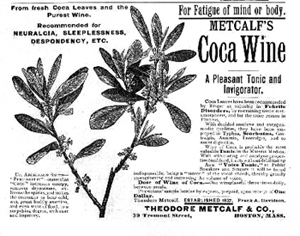 Metcalf Coca Wine was one of a huge variety of wines with cocaine that was commercially on the market. Everybody used to say that it would make you happy and it would also work as a medicinal treatment. We’ve got a few examples of this one. Totally kookie. I’ve not yet heard about this one. I wonder if all of this gave birth to the FDA. Feel free to jump in and educate me on this one. At some point it would be fun to do some research on it. For today’s purposes, I just spent a boatload of time just copying these images, so they didn’t distort. 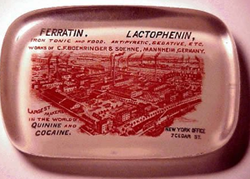 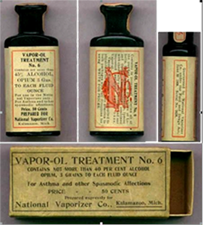 Opium for Asthma, National Vaporizer Company: Vapor Oil Treatment No. 6 contained 40 percent alcohol and three grams of opium per ounce. Sure to cure “the vapors,” it was recommended for asthma and other spasmodic affections, the price was 50 cents, and was produced in Kalamazoo, Michigan. June 30, 1908 date is on the side of the bottle.

Dragees Antiseptiques Au Menthol: A product of Anvers, France, at the time it was recommended that this snake oil was to be used by all stage actors, singers, teachers, and preachers, in order to have a maximum performance. It was “Great to ‘smooth’ the voice.” This was a cocaine product. 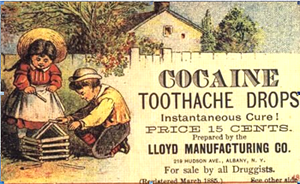 Lloyd Manufacturing Company: It was advertised as being very popular for children in 1885. “Not only did they relieve the pain, they made the children happy!” Instantaneous cure. Price was $0.15. Produced in Albany, New York. 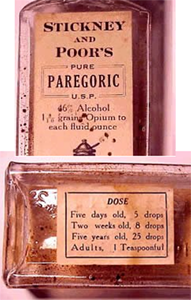