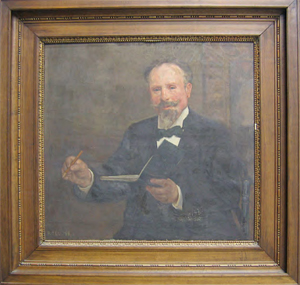 [PHOTO CREDIT:  Portrait of Alfred Smith; painted by Alfred Roll in 1898, from the Cadogan Guides]

When I think of the Impressionists, Monet, Manet, Renoir, and Gauguin immediately come to mind. I wanted to quickly connect an Impressionist to Bordeaux, and this is when I discovered Alfred Smith. With a name like Alfred Smith, one might not think of him as a notable Impressionist… So English sounding, unlike our above Francophiles.

I searched through my art book collection. Nothing. Everyone else named above, plenty. Alfred Smith is without any fanfare in my library.

So, who is Alfred Smith, the Impressionist from Bordeaux; and what did he create?  Quickiwiki… was an instant source and guide.

In 1854, Alfred Smith was born in Bordeaux, to an English family.

As it turns out, Alfred Smith is a lesser known Bordelais Impressionist.

Still it’s worth studying him and connecting him to Bordeaux.

Smith’s earlier work seems to have been inspired by Claude Monet’s. In 1880, Smith exhibited at the Paris Salon, earning an honorable mention. Three years later, his painting called Le quai de Bacalan le soir was exhibited at the Salon. (Translates into The Wharf of Bacalan at night.) It’s pictured below.

It took a while to find this painting; when I did I audibly said, “Ahhh.” How alluring and mysterious. I want to be on the Wharf of the Bacalan at night in this hour of diminishing light.

In the 1880s, Smith became the new leader of the Bordeaux school, displacing Louis Auguin. It’s said that Smith had no need to earn a living, so he seemed to dabble and didn’t fully devote himself to painting until 1886.

By 1894, Alfred Smith was named a Chevalier of the Legion of Honour. Smith won a bronze medal at the Exposition Universelle in Paris in 1900.

He exhibited regularly at French salons into the 1920s, and many of his works are held in French and Italian museums. Smith was distinguished for the atmospheric evocation of the woods, gardens and cityscapes, with a subtle and nuanced palette. He painted scenes from Bordeaux, Paris and Venice before discovering the Creuse valley. As Smith’s style matured he adapted a brighter palette, displayed in his landscapes of the Creuse valley. He has been called a member of the Crozant School, a broad collection of artists who painted nature around this village of the Creuse valley.

In this blog story, we have two great examples of Bordeaux art, which can quickly be related to Bordeaux wines.

The fist one above (Le quai de Bacalan le soir ) is a full bodied image calling for a full bodied wine. Let’s say a Left Bank Bordeaux, because it’s quite substantive and a bit mysterious, just as the wharves at Bacalan are so described in texts.

And the le Père Boyreau au printemps is light and breezy, like being in a spring garden… It’s definitely not a description of the Left (Cabernets) or Right (Merlot) bank wines (perhaps a Sauvignon Blanc?). But, for the sake of adventure, let’s think of it being situated on the southern part of the Left Bank by the Garonne River) in hte  region of Graves. The wines’ attributes from here are comprised of villages including Sauternes, Pessac, Talence, Léognan, Martillac, Saint-Morillon, and Portets. Just imagine sweet and delicate Sauternes, for instance… while sipping in le Père Boyreau’s garden.

Credit to Millesima for inspiring me to learn about Bordeaux. this has been a joy to discover.