As I’ve written about Portugal, To Understand a Wine, Once Must First Understand its People.

Now, it’s my time to learn about Verona, Italy: The customs of its people, its foods and wines, art and music, its landscapes, and its history. This is all for the purpose of understanding Cesari wines and what makes the Cesari family such prominent historical figures. This is a story about a family that has created a wine brand of world wide distinction.

Similar to my own thoughts, Gerardo Cesari believed that “Links between history and the land, culture, tradition and quality… do not belong just to one winery or brand, but to the whole community: everyone from the Verona area identifies with the local wines.”

In 1936, Cesari Vineyard was founded by Gerardo Cesari. It was Cesari’s dream to produce an Amarone wine capable of competing with the greatest red wines of the world. At the time, Gerardo believed that a wine area should be defined by its viticultural region, not by its methods of production. And so began the process of making a wine that would truly represent a superior Amarone from Verona, on the world wine stage.

[Photo of Cesari Vineyard is borrowed from their Website, to demonstrate the dramatic commitment to their region.] 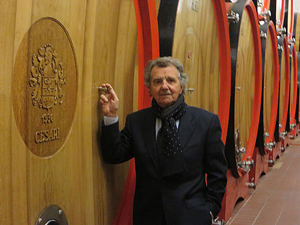 The Caesars were [one of] the first companies to arrive in the United States. We are now present in 56 countries. Passion, hard work, [and] commitment are not abstract words. [They] are the levers of a business system that looks at the result.

In the 1960s, Gerardo was joined by his son Franco Cesari [above], in order to expand into exports. It was Franco, who through hard work and enthusiasm, helped his father to reach his original goal of international respect and worldwide distribution. The Cesari name quickly became synonymous with Amarone around the globe. 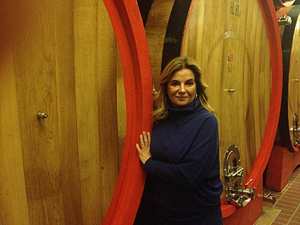 According to its exporter OPICI Wines:

The winery continues to evolve while staying true to its regional roots. Franco’s children, Gerardo and Deborah, have joined their father in upholding the pillars of traditional winemaking while introducing innovative technology at their two state-of-the-art cellars.

Their estate holdings include more than 100 hectares [nearly 250 acres] of hillside vineyards located in premier sites in the Valpolicella appellation, including 3 single vineyards, primarily in the historic Classico area.  An additional 10 hectares [25 acres] of 100% estate-managed vineyards under long-term lease are located throughout the Veneto region.  All are primarily planted to indigenous varietals, with a small percentage of international grapes, carefully harvested by hand ensuring that only the best grapes are selected. In recent years, Cesari has adopted environmentally sustainable growing practices. Focused on quality, Cesari extensively ages their wines beyond the DOCG regulations.

The Cesari portfolio is comprised of unique, elegant, and balanced appellation wines renowned for authenticity, respected for regional character, and distinguished for superior quality.

Photos of Franco and Deborah are on the Internet without photo credit.