This blog story began on Thursday, April 14, 2016. I titled it: Bordeaux, You Can Bank On It, Partie Quatre. At the time, I had no idea that this story was about to take a very sharp 180 degree turn. 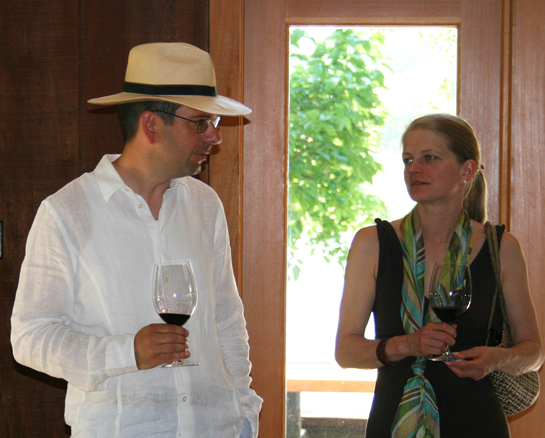 [Denis and May-Britt Malbec at a reception for Respite Wines in Geyserville a few years ago.]

What Originally Prompted Me

Lately, I’ve been exploring France’s Bordeaux region. As a resource, Denis and May-Britt Malbec are my primary connections to the region, if I have any questions. I’ve worked with them in the past, as they’re  Respite Wines‘ winemakers. The brand is owned by Charles Reichel and Corinne Reichel. When they launched the brand, I worked on a story about the Malbec’s: Respite’s Extraordinary Winemaking Team Denis Malbec and May-Britt Malbec.

Respite Winery, an Alexander Valley artisan treasure, has an unusually talented winemaking team, for which there is no quickly recognizable parallel that will easily come to mind. It’s a combination that has deep wine grape growing and winemaking roots with both Château Latour of Pauillac; and, a European Master Sommelier, who’s won the Prince Henri-Melchior de Polignac award, for best sommelier in the Nordic countries.

This powerhouse couple is the husband and wife team of Denis Malbec and wife May-Britt Malbec, from Notre Vin.

I’m beginning to learn about the Left and Right Banks. One step at a time for me; I have the rest of my life to learn more, right?

I came to a part where I thought, “Denis and May-Britt!” I had just seen roses from Denis on his Facebook page, “Who better?” I went into my Email program and wrote:

I’m trying to understand (for a wine blog story that I’m writing) the difference between Bordeaux’s Left and Right banks, in terms of terroir… mostly having to do with its soil composition. But, you might also have other insights for the Gironde River, with the Left Bank also having more Atlantic Ocean influences, and so much more.

When you have time, can you help me? I’ve been inspired to learn about Bordeaux by Millesima CIE. (You might know who they are, based on their New York City store.) I’d greatly appreciate your help, and I’ll be including you in this story.

By Friday, I hadn’t heard from them, also being very aware that we’re all busy and going into the weekend, so I didn’t press on. We were headed to Corinne Reichel’s house in the Geyserville hills, for our own private Respite. When we arrived, these two bottles were waiting for us on Corinne’s dining room table. “Sweet,” I thought, “but right now they’re too special to open.” I thought  of Denis and May-Britt in that moment, and smiled to myself. “So much love…”

By Saturday evening… I saw a post from May-Britt on Facebook. She had placed a beautiful pink rose on her timeline and wrote: Forever in my ♥

I thought, “Sweet,” smiled, again. “I should ask her if she got my Email.” I began typing, but then my eyes looked up to the post that preceded mine.

From Bahaneh. It read: So sorry for you loss May-Britt. Please let us know if there is anything we can do. You are in our thoughts. I then traveled upward and passed 100 comments… a very long stream… to get a grasp on what I was reading… Confirmed along the way and a little help from my friend Valerie Reichel Moberg.

There are no words for someone so young, to be involved in a single-car accident that would take away his very breath … that could leave someone so sweet, so dear, and very talented as May-Britt Malbec. They’re lovers like no others. Best friends first, kinda love… One that was intertwined before they even came to earth school, and then bumping into each other kinda-love, in some wine world.

There’s nothing we can do to turn back time…

Here’s the rest of Denis Malbec’s early history, which I happily worked on. His childhood ignited the passions in Bordeaux.

Such a extraordinary circumstance

A profile of Bordeaux, as only Denis would know

Winemaker Denis Malbec was born at Latour, which means that he not only learned to walk in between the barrels and bike in the vines, but he also learned vineyard and winery management early on with his father, Jean-Noel Malbec. Jean-Noel was also born at Latour, working there for 47 years. His tenure was from 1947 to 1994. Jean-Noel was Cellar Master from 1969 to 1994; and his grandfather was Camille Malbec, who worked in the vineyard from the 1920’s, until the end of the 1970’s.

Denis first studied viticulture and enology in Bordeaux and later in Reims, Champagne. He completed his studies with a “Tour de France” of the vineyards with internships at Château Haut-Brion – 1988 -, Château Lagrange – 1988 -, the Pugnac Cooperative – 1989 – in Côte de Bourg, Léon Viollant – 1990 -, owner and wine merchant in Côte de Beaune, Duval Leroy – 1990 & 1991 – in the Côte des Blancs in Champagne and at Calvet – 1992 -, negociant in Bordeaux.

Denis came to the US, and those of us who got to know him will never forget that ample smile, so fitted to his wine’s style.