The Full Moon in Pisces ~ Personified by Sean Thackrey

The Pisces personalities (and today’s full moon in Pisces) are geared toward being compassionate, adaptable, accepting, devoted, and being Imaginative. They’re the bard of the zodiac, the dreamer, the poet, the magician. They love to create illusions, the Wizard behind the curtain… Being the last sign of the Zodiac means that unless they have other planets in strong positions – like Aries – they just don’t have the energy to march forward like a visible pioneer, a warrior, a full blown worldly leader. Instead, they have the ability to become King Neptune, not King Charles I (Charlemagne)…

Pisces do not take well to a position of leadership or high business person; they are too sensitive and lacking in self-discipline and lacking self-confidence for positions such as that. What they are good at is is writing, acting, poetry, or being musicians. Pisces are excellent at anything that tugs at the heart strings and mystical/spiritual. They are extremely creative and can use their skills of creativity and their understanding of people to inspire others. (zodiac-signs-astrology.com)

I know no one better in the wine industry than Sean Thackrey, of Thackrey & Company. Sean completely personifies the Pisces personality as described in my first paragraph. A few years ago, Jose Diaz, Steve Heimoff, Hardy Wallace, and I made a trek into Marin County, to spend a day with Sean. It was just wonderful. Here’s the outcome of that very special day…

Off we all went into the hills of Marin, to spend an afternoon with wine legend Sean Thackrey. 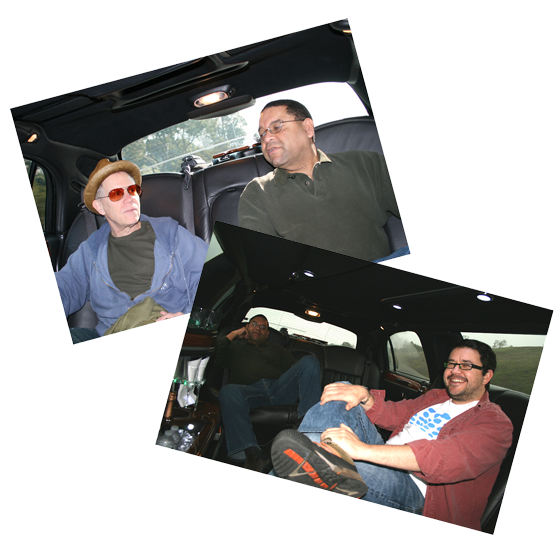 This day was planned to perfection. Jose arranged for a Pure Luxury Limousine, so we could enjoy responsibly and be safe. I had made all the phone and Email arrangements prior to our day. The day before and morning of our adventure, I prepared our luncheon. Leaving nothing to chance, we were ready. 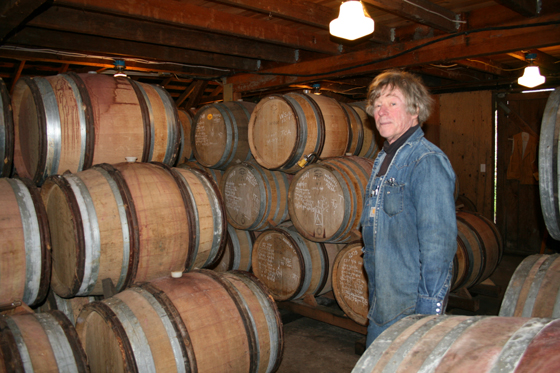 The car first picked up Hardy, then Jose and me, and finally down to Oakland to get Steve. He wasn’t quite ready (we were a bit early), so off we went to Whole Foods… an interesting, insightful detour. Back to Steve’s, when he buzzed us, and then we drove the back roads of Highway 1 to Sean’s. It was a gorgeous, sunny day. The ocean was glistening. The inside of the limo was warm and friendly. Life was perfect. We all were taking a day off together, and Sean Thackrey was invited. 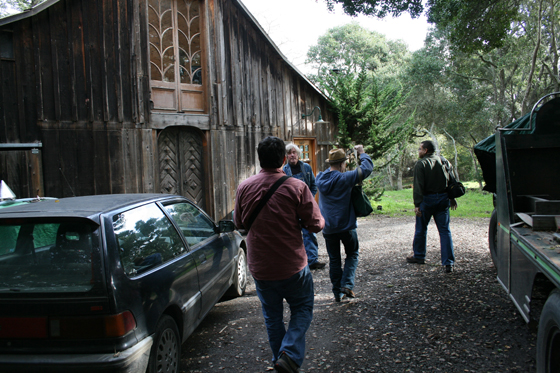 When we appeared in his yard, we all felt like we were reliving Ken Kesey’s Merry Prankster, without the psychedelic bus and drugs… but it was still some kind of flash back in energy and time. 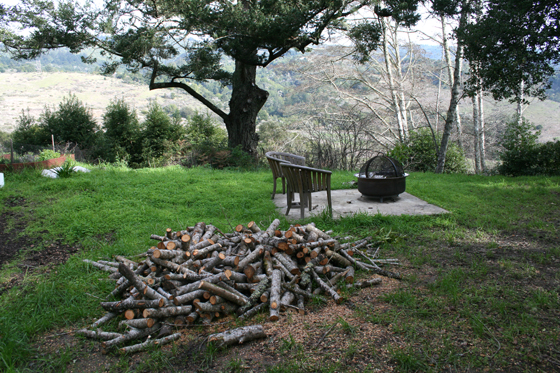 Sean’s a man of the earth. His property immediately reminded me of my days, while living in the woods of Maine on Allen Pond and Sabattus Lake. I grew up around a lot of water, swimming, and woods. I directed Androscoggin Day Camp with 200 kids… I know the great outdoors, and I immediately recalled the aromas of earth, pines, and salt water. It made me hunger for a moment in Maine to regroup my journey. Instead, I took in lots of images of nature to satiate my soul.

Sean asked what we’d like to do. I couldn’t resist. I said, “I’d like to take the tour.” We all laughed, as Sean led the way.

He took us into his hospitality room, where we were greeted by the heat of a small Jotul wood stove…. another throw back to when I used to heat our house on Allen Pond with eight cords of wood each winter. The warmth was perfect, as it wrapped us in this welcoming.

We stepped into Sean’s wine cellar, where he explained his practices. With his details on a barrel, it makes for an excellent snapshot into his wine making world. I have to admit I was paying more attention to the details of this cellar, than I was listening to his conversations with Hardy, Steve, and Jose. Unique images were everywhere. I wanted to capture it all. I came for the images and Sean Thackrey’s presence. The rest was for everyone else to absorb. 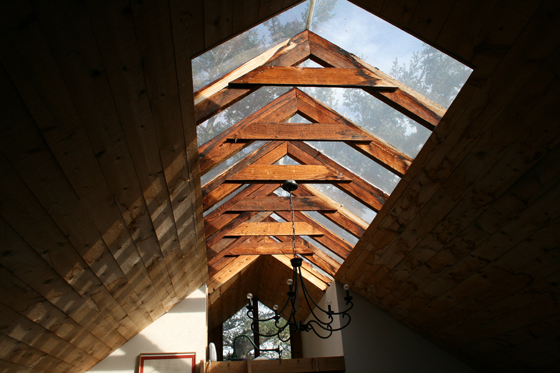 Each of us came for something unique. I wanted the imagery. Hardy wanted the video. Steve wanted to reconnect. Jose needed a day away from his computer, and once in the limo he knew why I almost insisted that he spend the day with us. 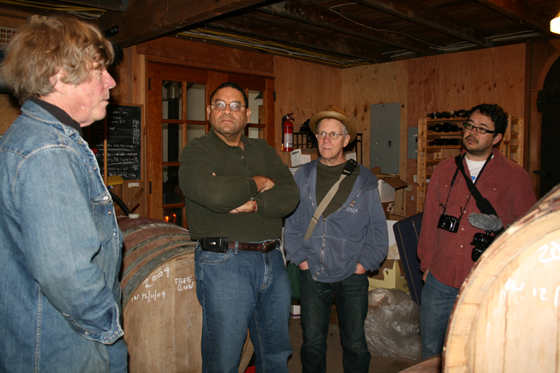 Jose, Steve, and Hardy hung on Sean’s every word… Life was good.

We then ventured to the rest of this wonderful Marin hills house. It’s quaintness was captivating. We learned that in his past life, Sean Thackrey was an art dealer. That seemed to explain a lot.

I have to confess that I also spent the day recording our adventures on Twitter. We gathered quite a following, so we weren’t just the five of us. We had become a cyberspace crew, all enjoying the hospitality of Sean Thackrey. I was the conduit, and kept everyone up on what was being discussed through Twitter. I can’t even explain the absorption, but I dare say it was massive. We had one person who was so absorbed that toward the end of what we were doing, he asked if Sean was taking questions. By then, my Blackberry was losing power, so we lost that opportunity; however, I asked his questions to Sean.

[Q] @streamertyer ~ Generally interested in how Mr. Thackrey came to choose his astronomically related #wine names and is he an avid astronomer?

How I came to choose the names: There’s no general reason. I just liked the idea. There’s no astronomical or astrological reason. Orion just seemed like Orion. It was completely arbitrary, because the wine seemed to go with this character and persona. Pleiades is a cluster, and it looks like a cluster of grapes.

A woman once asked me (she was buying a case of Pleiades for a friend) if I used the Pleiades technology in my winemaking. The answer was, “No.”

Am I an avid astronomer? I pay attention, but not in the sense of using sophisticated telescopes.

[Q] Well, you’re out in the countryside, and you don’t have city lights as a distraction in the night sky; so, you must spend time at night enjoying what you can see there?

[A] Sean Thackrey ~ Of course. After I had named all of my wines after constellations that made sense to me, I found out no one could pronounce them. I had a fire department volunteer ask me for a donation, the way they do. I gave her a case of Orion. She came back to me to show me how it was listed: Sean Thackrey O’Ryan.

We both laughed, and I said, “Well, you are Irish, so O’Ryan’s logical… We continued laughing. 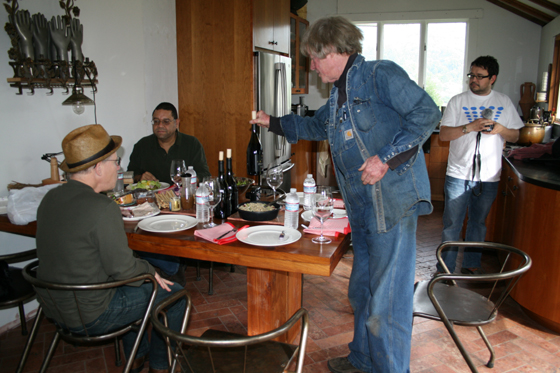 At lunch, Sean presented his 2006 Sirius, his 2007 Sirius, and his 2007 Orion. I loved the Sirius, as always, but had never tasted his Orion. The Orion blew my mind. We had one grand time, enjoying our afternoon with Sean, great food and wine, day in the forest (seemingly) primeval… all brought to us by our Pure Luxury day.

As we left, our driver wanted to take a group shot of us. As I now look at this image, I can’t help but laugh out loud. It was just that kind of day, as the universe invited each of us to its pure enjoyment. 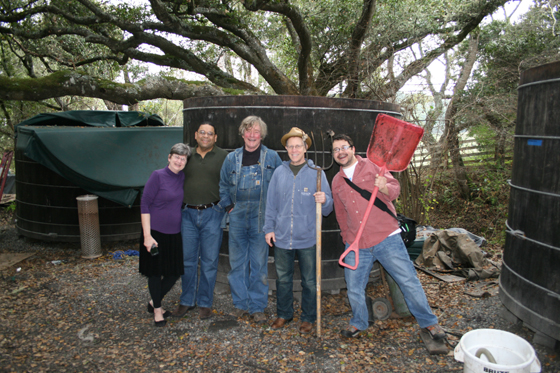