This exists in the grand scheme of things, like the image above. It’s the overall climate of a specific region, like a heavy fog that blankets the Russian River Valley, for instance. 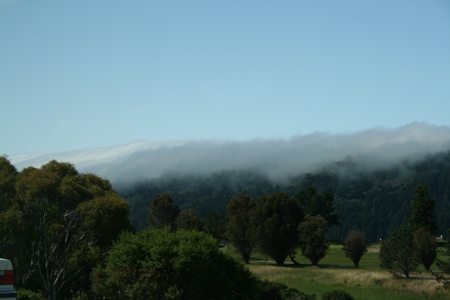 A mesoclimate happens in a region on a smaller scale. The mesoclimate has variables in altitude, soil types, and the distance from a river ~ where the fog will burn off further away from a river’s bank first, and evaporate to the river’s edge as it goes through the burning off process.

A microclimate exists within a few rows of a vineyard. It’s in the microclimate that vineyardists have the most control of managing for distinct flavors and aromas of wine grapes and the resulting wine. This is the reason why we’re continually reading about this particular climate over all the others.

This climate refers to the environment around the individual foliage of a vine. While a vineyard would have had early morning fog, as it burns off, cool moisture remains under the vine’s canopy. While it’s burning off above the vine bringing in warmer air, within the canopy system, it takes a bit longer for the fog to evaporate, and consequently keeps the grapes a bit cooler for an extended period of time.