A mistake working in favor of Jeff Cohn

I HATE making mistakes. I’m really hard on myself, but not as hard as I used to be, or some others might even be…

A Wine Writer, a White Feather, and a Wine Maker

A mistake realization always brings me back to my Happy Daze, and how I learned to ease up on myself and – more importantly – others.

EARLY 1970s: I was professionally creating really intricate bead work… One day, my sister Merry walked into my mother’s house (where I was also visiting) with someone that she had just met. Her new friend’s name was Wally White Feather. Wally was from a South Dakota Sioux tribe (Nemo, SD). This Native American was amazed at the expertise of my bead work (Caucasian)

She immediately gave four things to me:

I’d love to re-find Wally. Can you find her mistake?

My mistake was not holding onto her, just for the fun of it. We all make mistakes.

Fast forward to Jeff Cohn and the Robert Parker Matter of Taste, in San Francisco on Saturday, November 14.

Everything seemed picture perfect at the Palace Hotel: grand ballrooms, glittering in gold, chandeliers, balconies, marble. What could possibly go wrong? And then I saw it… The conduit, if you will, where the spirit of the event had an exit and an entrance.

The Brochure… It happened in the brochure. If it had happened to me, at this stage of the game as all things do, I’d just say, “there’s the conduit” and move on. I’m sure someone else would have had to swallow that pill, if Mr. Parker were to see this minuscule mistake. Honestly, if I hadn’t spotted that silly mistake – definitely a spell check one, as someone was furiously typing away, I wouldn’t have this story; so, it’s to Jeff Cohn’s advantage that I spotted it.

Upon arrival, I decided to see who was pouring that I knew, and I’d go to those tables first.

Under each vintner’s name was their locality… Jeff Cohn, Japan. Huh? Japan? I must have read that three or four times, trying to find some connection. Wines being poured were from California, Oregon, and New Zealand… New World wines. Well, I could suppose that Japan was a new world for wine, but it was just some ridiculous mistake. But, it – as a conduit – took me right to his table without further ado. If there’s a conduit, I’m all over it.

As I arrived, I heard Jeff saying to someone as he was pouring wine, “Want to taste the best Viognier you’ve ever tasted?”

I thought, “Well yeah?” Then, Jeff spotted me and said to the woman, after her poured her a taste, “Excuse me, I have to go to the other side of the table,” and came right to me. Great bear hugs exchanged and then I said, “So, tell me all about Japan.” Stammering, wanting to crawl back under the table, Jeff was beside himself. I said, “No, Jeff, not to worry. It’s the best thing that could have happened to you, because now I’m going to write about this. We all make mistakes, but we don’t all take it well. I USED to not take it well. Today, I’m much better at it. I told him the above story about Wally White Feather; and then said, “I need to taste the best Viognier I’ve ever tasted.” I had heard it, and inquiring palates really wanted to know. 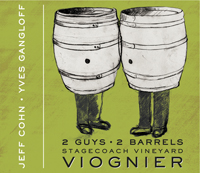 He wasn’t exaggerating, and he hasn’t made any mistakes with this wine. The wine is called “2 GUYS • 2 BARRELS.” It was indeed the best Viognier I’ve ever tasted. There’s nothing more I can say about it except, “Perfecto!” If you get a chance to taste this wine… go for it! Buy it! If it had been for sale, I would be enjoying it right now. I took a picture of it for everyone to see. It’s a new adventure for Jeff, and a stellar palate pleaser… Go Jeff… from Japan or Alameda, man of the world.
And, who’s the other guy?