From this definition, can we find many indigenous grape varieties? I would say that Durif (a.k.a Petite Sirah) is indigenous to Montpelier France, since Syrah and Peloursin were crossed by Francois Durif in the early 1880s. Durif created an entirely new grape variety in the cross breeding process. He named it after himself, and when Charles McIver brought Durif to California, he named it Petite Sirah.

Dr. Harold Olmo, when at the University of California at Davis, had a heyday in his greenhouse, creating so many new grape varieties it would make your head spin… Like, the Symphony grape, for instance, a cross between Muscat of Alexandria and Grenache Gris. And, there are many, many others that Dr. Olmo created as now indigenous to California. (Just talk to his biographer Lynn Alley, Dr. Olmo’s assistant at U.C. Davis.)

And here’s another one for you. The successful creation of a brand new red grapevine variety has recently been achieved in South Africa and has been called ‘Cabernet labrusco.’ When Vitis grapes are cross bred, That’s Amore! 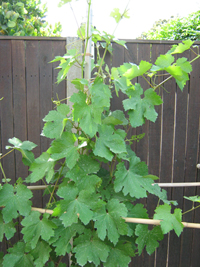 I recently attended an Italian wine tasting in San Francisco. It was a beautifully delicious event. Most people were looking for importers; however, plenty of selected media people were also invited, including Jose and me.

My approach and plan

MY APPROACH: I decided I’d walk around the room, and catch those who (mostly) weren’t engaged in conversation at the time. More efficient use of my time, since the offering was vast and not going to allow for me to be visiting with everyone. As I walked into the grand ballroom, to my immediate right was the first person I saw, he was not engaged, and fit my style.

MY PLAN: I had decided to up my Wine Century Club varieties tasted that day, then write about the brands. I’ve enjoyed nearly 160 varieties so far, and usually at these tastings, unusual grape varieties are the norm. The one I went to in San Francisco called Port4lio,  I wrote in that story, “I had… tasted just over 60 different wine grape cultivars.” That was in one day at one location. So I was really jazzed, because they were unusual cultivars.

My mind shot to Armenia (6,100 years ago) and Georgia (6,000 years ago), where indigenous is indigenous for the rest of the world. I remembered hosting the “Special American Business Internship Training Delegates,” who were learning about the US Wine Market. Delegates were from Azerbaijan, Georgia, Moldova, and the Ukraine. This is when I first learned about their region being identified as one of the original indigenous grape cultivar locations. Shock was probably all over my face, but he had identified me as completely ignorant, and there you go. They gave a book to me: In Georgian Wine Guide (2012), by Malkhaz Kharbedia, “Few would nowadays doubt the ascertain that the oldest traces of viticulture are to be found in Georgia. The history of wine began in Neolithic times, and the clearest traces of viticulture have been found on the territory of Georgia.” (p. 28)

Every traditional wine-growing region in the EU that values its reputation has its indigenous grape varieties – plants to which we ascribe indigenousness. And when a variety is indigenous, the wine made from it is indigenous too. These grape varieties and wines have qualities we would like to have ourselves: they are original, unrepeatable, exceptional, and sometimes even unique.

In this connection, two terms are widely used in both French and English: autochtone/autochthon and indigène/indigenous. Both terms are well-know in expert and amateur circles and, in the wine-growing and wine industry, are most often used when referring to varieties of the noble European vine Vitis sativa or to fermentation yeast that is not selected, meaning that it is not selected especially for that purpose but appears in vineyards and wine cellars around two weeks before the grapes are ripe, a process that has been occurring for thousands of years.

Tomorrow, we’re going to be exploring this indigenous grape variety called “Cabernet labrusco.” – The creation of a brand new red grapevine variety, and I’ve got Dr. Jeronimo Rodriques, who will be teaching us all.

“In 1994, Dr Jerry Rodrigues crossed two Vitis vinifera cultivars, using a rather obscure variety called Danugue (aka Black Barbarossa, Barbarossa, or Gros Guillaume) as the pollen parent, and the well-known Cabernet sauvignon as the seed parent.

It should be noted from the start that Cabernet labrusco bears no relationship (genetically or otherwise) with any of the American Vitis labrusca species (the former has an ‘o’ at the end of its name!). Furthermore, Cabernet labrusco is also unrelated (genetically or otherwise) to the northern Italian Lambrusco grapevine species from the Emilia-Romagna region (the former has no ‘m’ in the middle of its name!).

Aha! An indigenous cultivar is born in South Africa. Tomorrow, the details from Jeronimo Rodrigues.