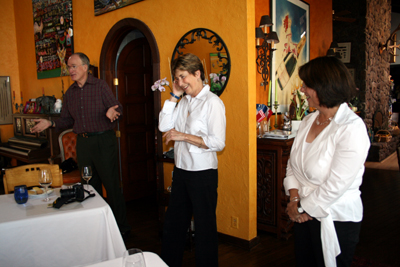 Since the holidays are upon us, here’s that primer by Laura Martinez of The Artisan Palate.

Each cheese had a unique style, and offered something companionable to the wine for which it was paired. All of the cheeses came from Northern California, because there are about 40 artisan cheese makers in this area alone. (Chefs, plan your next trip around wine and cheese. You won’t be disappointed.) 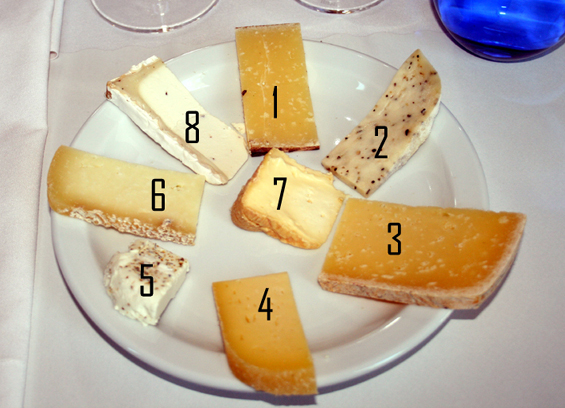 This plate of cheese has a number on it that corresponds with the cheeses that we tasted in the order of tasting.

1. Pinot Grigio ~ Vella Dry Jack, Sonoma CA: This Artisan cow’s milk cheese was very firm with a cocoa rind, which meant that it had gathered a bit of age. It was crumbly and dry, as a result of now having low moisture and oil. We crumbled the cheese, tasting just a tiny bit of it, to get the initial taste to understand its flavor and how it would then interplay with the Pinot Grigio. The wine introduced a lemony, crisp acidity, blending the two – solid and liquid – into a creamy texture on everyone’s palate. It was an instant hit.

2.  Chardonnay, Sonoma County ~ Franklin’s Teleme with Black Pepper, Los Banos CA: This was a very gooey, Artisan cheese, much different from the first one, and had a black pepper rind. Right away we all knew that this one would have a spicy kick to it and it delivered, with a very creamy texture that was perfect for the Las Patolitas Chardonnay. Both the cheese and wine were beautifully round, matching the body of each other’s composition. Laura called it a “comfort food” feeling, and we all agreed.

3. Sonoma Coast Pinot Noir ~ Matos St. George, Santa Rosa CA: This was a Farmstead cheese, which means that the family raises the animals that deliver milk, then they gathers the raw milk in order to make the cheese. This one was similar to the first (Vella Dry Jack), but had a bit more moisture. The nose was a bit funky (which we should expect from a raw milk cheese). It was also a bigger cheese than the Franklin, because of its age. Paired with the Sonoma Coast Pinot, the mushroom qualities of both cheese and wine came through, along with the beautifully structured plum flavors of the Pinot, all making for a gorgeous pairing.

4. Sangiacomo Vineyard Merlot, Sonoma, Carneros ~ Bellwether Carmody, Valley Ford CA: This cheese was made from Jersey cows. According to Laura, Jersey cows create creamy, sweet milk and cheese. There’s not as much fat as what Holstein cows produce, giving Jersey cow cheese and advantage for sweeter cheese production. This cheese didn’t have as much fat, but did have a bit more citrus notes to it. The 2004 Pasatiempo Merlot made for a natural compliment. I picked up cassis on the Merlot, as well as other blackberry fruit. Charles Creek Merlots made a believer of me for Merlots. Prior to Charles Creek Miradero – their 2001 – I just didn’t get Merlot. A bit of vanilla also rounded out the complete experience for this one.

5. Grenache, San Luis Obispo ~ Cypress Grove Purple Haze, Eureka CA: This one was fresh goat cheese, which is crafted in a three inch round chevre disks. A bolder cheese, it had the perfect mixture of lavender and fennel pollen. These flavors gave this cheese a sweetness that played off the acidity. It was delightfully complemented by the En Casa Grenache’s softness and perceived palate sweetness, regardless of the fact that the wine was fermented dry.

6. Sonoma Valley Cabernet Sauvignon ~ Bellwether San Andreas, Valley Ford CA: This cheese is a sheep’s milk cheese, coming from their own flock. It’s a raw milk (funky flavors) Farmstead cheese, and is an original for Bellwether. Because this was a cheese that came from sheep as its source, the flavors and texture of lanolin were present. (When you touch sheep’s wool and rub your hands together, the oil on your hands is “lanolin” – the natural oil found in sheep’s wool.) The cheese was smooth and full-flavored, perfect for a big, red wine. The Las Pasiones Cabernet Sauvignon, with its hearty black fruit flavors, beautifully complemented the tasting experience between these two products.

7. Stagecoach Vineyard, Napa Valley, Cabernet Saugivnon ~ Cowgirl Creamery Red Hawk, Point Reyes CA: A Farmstead cheese, the Red Hawk Point Reyes cheese (found in the middle of the image above, because it was a perfect fit for that space, versus the clockwise movement to that point) captures the essence of West Marin with its Red Hawk. A triple-cream, washed-rind, fully-flavored cheese was made from organic cow’s milk from the Straus Family Dairy. It was aged six weeks and washed with a brine solution that promotes the growth of a bacteria that tints the rind a sunset red-orange color that you can see on the rind above. Another slightly pungent cheese, the Stagecoach Cabernet really stood up to the flavors of the cheese, and created a perfectly smooth texture, when combined on the palate with cheese and wine. The wine’s rich and decadent flavors can be attributed to the bright red, rocky mountainous soils, which produces a Cab with aromas of sweet blackberry and cassis fruit. When the two came together, it was luscious.

8. Muscat Canelli ~ Cypress Grove Truffle Tremor, Eureka CA: It was lovely to end on a sweet note, with a desert cheese and a dessert wine. This goat’s cheese had classic flavors of truffles with the velvety smooth ripeness of goat milk cheese. It was earthy and elegant, and that was perfectly coupled with the sophistication of the Charles Creek Muscat Canelli dessert wine.

As Laura Martinez told us somewhere in the middle of our tastings, which is a great ending to this story, when asked about what cheeses are best served as a course:

“If you’re serving a cheese course, make your appetizer cheeses those which are light; and, if it’s served as a dessert, make them full bodied, just as you feel at the end of the meal.“