The Carmenere Wines of Chile from the Cachapoal Valley 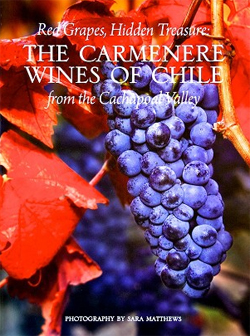 FIRST THE ACCOMPANYING BOOK: The Carménère Wines of Chile, from the Cachapoal Valley, originally published in 2009.

Class act: Along with these three wines pictured below, I also received “Red Grapes, Hidden Treasure: The Carmenere Wines of Chile, from the Cachapoal Valley.” The book is gorgeous, and I’m about to get a major knowledge bump (without falling on my head) about Carmenere from Chile’s Cachapoal Valley.

This coffee table sized book has images by photographer Sara Mathews. The stories are written by Sara Matthews, Mariana Martinez, and Rafael Guilisasti, and the forward was written by Isabel Guilisasti, the marketing director of Concha y Toro. What a magnificent collaboration. Eye candy at its finest and words for your Spanish soul, even if you have no Spanish DNA.

Ten great things that I learned about the book for Cachapoal Valley from Sara Matthews:

While Burgundy is well known for its Pinot Noir, the US is the world leader for its Petite Sirah, Australia is known for Shiraz, Sauvignon Blanc has crafted its own signature identity in New Zealand, and in Chile Carmenere is becoming known world-wide for its best world flavor characteristics.

So, let’s get on with the tasting. I’m going to be looking for that “silky soft and spicy character, with a very velvety body.” Thanks to Concha y Toto, I have three samples. 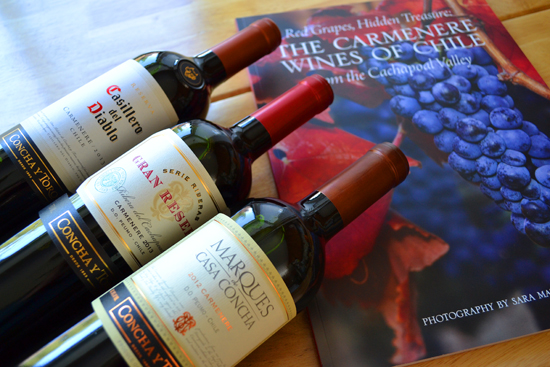 The Carmenere Wines of Chile from the Cachapoal Valley

Concha & Toto’s Winemaker: Marcelo Papa
Marcelo holds a degree in Enology from the Universidad Católica de Chile and he has followed a successful career in Viña Concha y Toro. Since 1998, he’s been in charge of the range Casillero del Diablo. A year later, he took on the responsibility of Marques de Casa Concha, one of the best-known and traditional brands of Chile.