Before launching bw166 in 2014, Moramarco spent four years as president and CEO of Winebow, Inc., a leading wine importing and wholesale company. Previously he worked for Constellation Brands, the largest marketer and producer of wine in the world. He was CEO of Constellation International from 2007 to 2009, CEO of Constellation Europe from 2006 to 2007, CEO of Constellation’s Icon Estates from 2003 to 2005 and CEO of Canandaigua Wine Co. from 1999 to 2003. Earlier in his career he was CEO of Allied Domecq Wines USA from 1992 to 1999 and served in other roles with its predecessor companies from 1982 to 1992.  He is a past chairman of the Wine Market Council, past chairman of the American Vintners Association and a former board member of the Wine Institute. Moramarco has a degree in agricultural sciences and management from U.C. Davis.  He lives in Santa Rosa, California.

The subscription report provides a new way to analyze market data, and Jon believes it provides the most accurate look available for the market.  Sam Folsom has reached out to me, in the event that I’d have interest in Jon’s data. Yes, indeed I do, because I know that my readership is divided between wine consumers and wine professionals. I’m not going to reinvent this wheel, because data is data; so, here for you, wine pros… I suggest a subscription, for more data in the future. 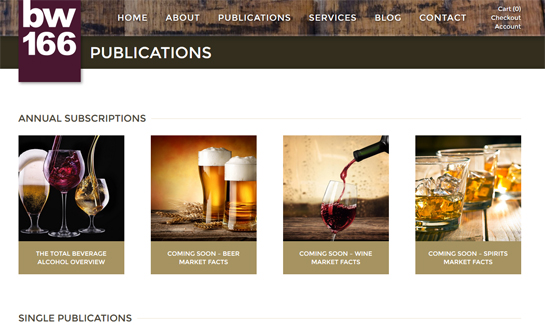 I do find it very interesting that smaller producers are enjoying significant growth in the U.S., and a slowing trend for larger companies. From a press release.

A just-released report analyzing the U.S. market for alcoholic beverages shows a notable lack of growth for the top producers, at least for wine and beer, while smaller companies enjoyed a fairly significant uptick in shipments. The new bw166 Total Beverage Alcohol Annual Review, compiled by veteran industry executive Jon Moramarco, is now available to subscribers and provides ‘intelligent data’ on the market and a detailed analysis of trends for beer, wine and spirits in a variety of categories.

The new bw166 Total Beverage Alcohol Annual Review covers the period ending December 31, 2014, and includes a 30-year look at key economic factors, demographic data and beverage alcohol trends as well as a 10-year, in-depth review of statistics and analysis for alcoholic beverages in a variety of categories. Among the findings, Moramarco’s report shows the U.S. market for wine, excluding cider, at 380 million cases, which is significantly higher than other reports. He attributes this to a more refined analysis of government data that uncovered misinterpretations of certain data points, such as bulk imports. For beer and spirits, Moramarco’s research substantiates reports of growth in the craft brewer segment, but it questions reports of growth in the craft spirits category.

Highlights in the bw166 Total Beverage Alcohol Annual Review include:

Moramarco has developed a proprietary system for alcoholic beverage data analysis that provides a very accurate picture of the U.S. market for beer, wine and spirits and gives a one-stop view of product entering the marketplace for all three market segments using a single methodology.

“The U.S. market for alcoholic beverages is fairly healthy, but much of the growth is coming from smaller companies – at least those outside the biggest producers. To get an accurate picture of the trends, it’s critical to look beyond the raw numbers. Our ‘intelligent data’ highlights many real-world factors that can skew the numbers. Business leaders need accurate, consistent data to inform important decisions, which the BW 166 Total Beverage Alcohol Annual Review provides.”

The bw166 Total Beverage Alcohol Annual Review includes extensive category breakdowns for beer, wine and spirits.  Subsections detail shipments into U.S. markets, imports and exports by type and country, and a detailed examination of the California market by producers, wholesalers and importers. The report also provides total volumes and values for beer, wine and spirits, as well as extensive demographic and economic trends.

The bw166 Total Beverage Alcohol Annual Review is available at a tiered pricing structure depending on company size, beginning at $900. bw166 also publishes the monthly Total Beverage Alcohol Overview, which continuously tracks rolling 12-month data for beer, wine and spirits in a variety of categories. It is available by subscription beginning at $150 per year. To order the Annual Review or a subscription to the monthly report, or for additional information on bw166, visit the website at bw166.com.