Cabernet Day, I just had to finally jump in

This day, that day, Cabernet day, I’ve thought about doing a Petite Sirah day… How many days can you have in wine, when there are 365 days in a year. Portugal has over 500 different grape varieties that are indigenous, and Italy can boast even more? But… I’m in marketing, right? So I do see the the opportunity; but, I’ve just never jumped in, really. so much to do, so little time, so many interests that it’s almost mind boggling.

Credit has to be given to Rick Bakas. As a new wine marketer, he got together with fellow bloggers and they all tasted Cabernets (Sauvignon and Franc). This began the day, six years ago… He decided it should always be the Thursday before Labor Day, he hash-tagged it #CabernetDay; and since then, many people have gone along with the program. He sees Cabernet Day as the unofficial kick off to the holiday wine season.

So, this year, I turned a Cabernet corner, and decided to work with brands that I know, brands that have helped me to promote Petite Sirah. I know their wines, I know their consistency, I also know their integrity; not just the small artisan brands, but also the big corporations. The carry the burden of marketing Petite Sirah, our beloved PS I Love You variety… So, how about those Cabs? 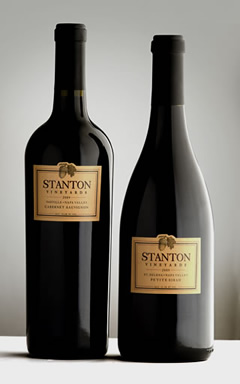 Here we go, in no particular order.

Stanton Vineyards Oakville currently has a non-vintage Cabernet Sauvignon available. The Stanton family has grown grapes in Napa Valley since 1947. They began making our own wine in 1999.

This current vintage of their Cabernet Sauvignon is 100 percent estate fruit. The vines have been in production since 1999, as the Stanton’s first vintage. This is very much an artisan, small production winery, with only 500 cases or fewer being produced each year. David Phinney is the winemaker. An interesting note is that their current release, from 2012, received 91 points from the Wine Spectator magazine.

As an urban winery they’re ideally situated in Alameda, California. The winery has spectacular views of the San Francisco skyline, and more important is its locale. This allows the winemaking team to be regionally centralized – ensuring that whether Cabernet Sauvignon from Napa Valley, Zinfandel from Sonoma County, Petite Sirah from Contra Costa County, or Chardonnay from the Santa Lucia Highlands, the winemaking team is able to handle the fruit soon after it is picked.

Owner Kent Rosenblum was the very first person to Join PS I Love You, when Louis Foppiano allowed me to create the group. I was Louis’s publicist at the time, and the idea to start a group came to me as an insight, during Louis’s first Petite Sirah Symposium. Kent wasted no time, because he’s truly a marketing genius. He sees a vision and runs with it.

Parducci has a very long history in Mendocino County. They were the third winery to produce a Petite Sirah, in fact. Concannon was first,  just two weeks later Chateau Souverain released theirs, and Parducci was next to follow. Their wines are very fruit driven and giving wine fans a great value for their wines.

Red Cedar Vineyard is the estate vineyard for Clayhouse Wines. It’s quite large, 1,500 acres, long and narrow (almost five miles end to end). It’s certified sustainable and is the source and inspiration for all Clayhouse wines. There’s an old adobe house on the property, built in the mid-1800s … that’s where the name “Clayhouse” comes from.

Within Red Cedar Vineyard there are isolated “own-rooted” blocks … meaning that the vines are planted on their own vinifera roots, rather than on phylloxera-resistant rootsock. Because these blocks are isolated within a large vineyard, they’ve survived, so far, without succumbing to the root-louse scourge of most California vineyard.

This own-rooted block is less well-known than our Petite Sirah, and even more isolated within Red Cedar. But from that block we bottle Clayhouse Estate “Own Rooted” Cabernet Sauvignon.

Hi Jo. Yes I make Cab for Miro from the newest appellation in SoCo- pine Mtn- Cloverdale Peak. Top of the Mtn at 2400 feet elevation. One of the first to put that on the label.

Miro’s wines are highly regarded by wine critics… Pick up a bottle and you’ll immediately know why.

This 2005 is a blend of 92% Cabernet Sauvignon, 4% Cabernet Franc and 4% Petit Verdot, aged 23 months in French oak (50% new). The family produced only 540 cases from their gravelly, loamy soil-dominated vineyard. This is a strong effort from Ballentine, with a dense, ruby/purple/garnet color and attractive notes of cedar wood and black currants. It is a fleshy, meaty mouthful of Cabernet with oak, tannin, and serious power and intensity. This is a stunningly impressive, big, muscular style of Cabernet Sauvignon to drink over the next 10-15 years.

You may also enjoy our current release Cabernet Sauvignon:

The 2012 Reserve Cabernet Sauvignon was selected from our best performing section of vineyard in one of the best years in recent memory. We took careful measures to ensure only the properly mature fruit made it into this wine. This allowed us to achieve maximizied color extraction and tannin structure. The 2012 Cabernet Sauvignon was gently handled in the winery and hand punched down three times a day. Pressed off early to maintain fresh fruit vibrancy, this wine was aged in 100% new French oak.   This is a classic Napa wine and our Cabernet is full bodied and intensely smooth.  It packs in the favor and you’ll note black cherry, dark chocolate, coffee and spice amongst others.  This is a wine to drink now or to age over the next ten years.  Burgers, steak or stroganoff, Cabernet Sauvignon is your friend.

Vina Robles’ motto is “European Inspiration – California Character”. The Swiss family-owned and operated winery crafts wines that represent a bridge between the Old and New worlds, capturing the finesse associated with European wines while celebrating the bold flavors of their estate vineyards in Paso Robles.

This includes employing traditional techniques that start in the vineyard and carry through into the winemaking as well as the experience when you visit their Hospitality Center or Amphitheatre. Paso Robles produces very bold, expressive fruit characters that are unique and somewhat different than Europe.  By balancing the wine and employing some tried and true traditional winemaking techniques, winemaker Kevin Willenborg is able to achieve a wine that reflects the terroir of Paso yet the balance, age-worthy structure and finesse associated with some of the best wines of Europe.