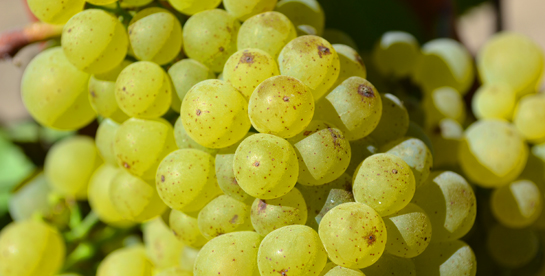 The blessing of a harvest is a major, religious tradition in all wine regions. In the spring, many ceremonies also occur for the blessing of wine grape vines. I once had to research “why,” when asked; so, I went to my dear friend the Reverend Doctor John Staten. John and his family own Field Stone Winery, in Alexander Valley. For a while we worked together to get out his message. In the process, we had very long conversations about spirituality, not religious, but just about sacredness. They were always warm and wonderful discussions, and we repeatedly found ourselves on the same page. (Good times.) 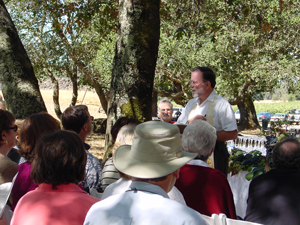 His answer about “Why the blessing of the vines.” [Image of Reverend John Staten.]

The idea of God’s (Hebrew: Yahweh’s) role in the fertility, growth, and harvest of all the fruits and vegetables from the earth is rooted in the book of Genesis: The first key text is Gen. 1-2. (Note that in this first imaginative creation narrative, God, in the earth’s “as the Garden of Eden,” has not provided for humans anymore to eat than vegetables and fruit from the “Garden” (making vegetarians and wine lovers happy!). God is confirmed as the sole creator of the world we live in. (Here is the difference between the “monotheistic” [one God] religions [Judaism, Christianity, and Islam] and the ancient “polytheistic” Canaanite cults before them in the Near East). In the Hebrew Bible the second key Creation text is the account of the great flood and the blessed covenant made with “our ancestor” Noah and his descendants) Noah Gen. 5:28-9:17. God’s “covenant” with Noah and all his descendants (i.e., all who populate the earth) is a great “blessing” (see Gen. 9: 1ff.) Note that, known as “the first tiller of the soil,” was the first to “plant a vineyard”.

I’ve underlined the above text, for emphasis… “the first tiller of the soil” was the first to “plant a vineyard.” I find this to be very interesting history, don’t you?

As a wine pro, I’ve seen blessings by all faiths for many occasions: 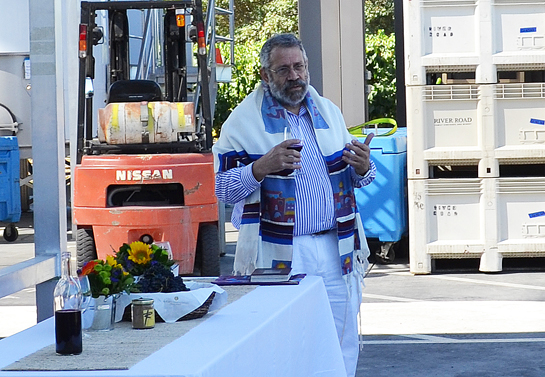 [Image of Rabbi Mordecai Miller.] People of all faiths invoke the blessings of their spiritual leaders, who then invoke their God to bless an important aspect of their lives.  I listened carefully to Rabbi Miller, and deliberately blocked out all other thoughts, sights, and sounds, practicing my Buddhist teachings of “Be Here Now.” I stopped photographing for a bit, to just watch and listen to his words. It became a very sacred moment. One could hear a pin drop as he spoke, quoting many Biblical references all related to the harvest. I literally could feel him enveloped in angel wings as he spoke, it was that moving and special.

Yes, I do believe in angels. I have my own. Twice… not once, but twice… as I was driving on the freeway and alone in the car, when I wanted to pull out into traffic… having looked in my rear view mirror, over my shoulder, and in my side mirror, seeing nothing, I began to pull out. I was stopped immediately, as someone tapped me on my left shoulder. By stopping, both times, I then saw a car whiz past me; cars that were in a blind spot, regardless of how much I looked. If I had pulled out either time, my life and perhaps other people’s lives were in danger.

The first time, I thought it was some kind of fluke. The second time I surrendered to it, knowing is was not a fluke but divine intervention. So, yes, I can and have felt angels… 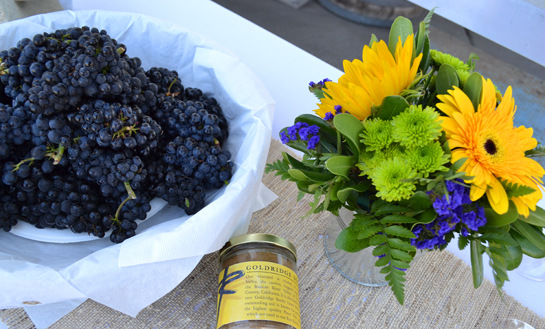 Tradition is an important aspect in our lives. As I create some for my own small family, I’m reminded of the big picture, when someone has that deep connection to call in the big gurus. And, it’s always a pleasure to be at such an intimate group.