Robert Biale Vineyards is commemorating 25 years of their dedication to preserving historic vineyards. It’s not just about growing wine grapes for the Biale team. It about history, people, wine grapes, terroir, and the best use for all of it. Tomorrow, I’m headed to the winery to enjoy what they feel is the best of their best: Robert Biale Vineyards’ Vintage Review Tasting. (I’ll also blog about today’s event in the future.) 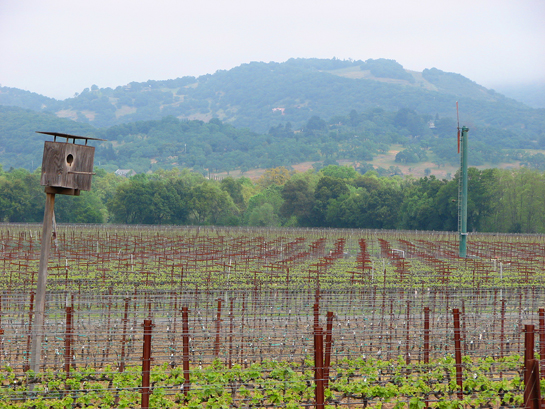 I remember the day that Robert Biale Vineyards became part of PS I Love You. I have to admit that I didn’t know the winery at the time, but Jose (my partner) surely did. He told me, “Congratulations, they’re a real cult winery.” I was new to understanding who the key players of Petite Sirah were back then. I’m definitely more in tune with who’s who, now, and Robert Biale Vineyards is part of the crème de la crème. The winery has participated on our board of directors, with partner Dave Pramuk being a Past President and sitting on our board for years. Also, on occasion, Dave has sought my help with editing his writing. He’s a great story teller, and I just edit his work, without changing very much at all… Mostly the dreaded punctuation that most people ask for help to finalize a great document.

For the rest of this week, I’m going to share their story. Perhaps it will inspire others, and perhaps it will be fun reading for those of you who aren’t in the business of wine. The story has broken down into the following:

As a wine lover, wouldn’t it be cool if you could go back in time and taste the wines that our forefathers made over a century ago? Well actually, you can. Zinfandel, having been planted wider than any wine grape in California history, still thrives state-wide; and, many vineyards are among the oldest producing grapevines in the world. When you’re a winemaker in search of complex wine character and a sense of place, these old plants are living treasures.

We have been on a quest to realize the full potential of California’s historic vineyards, and to create greater understanding about the joyful pleasures and true character of Zinfandel and Petite Sirah. Honoring the wisdom and labors of our forefathers, and keeping the agricultural and social traditions alive that are unique to American wine, it doesn’t get any more gratifying than that in the wine business…

At Robert Biale Vineyards, where a Twenty Fifth Harvest Anniversary is being celebrated this fall, these examples of old vineyards in Napa Valley are very rare and considered by its founders and fanatics to be revered, historic sites. They are living landmarks – if you will – that capture the very essence of California wine quality: fruit purity, ideal balance, a strong sense of place, and an unabashed, unrivalled hedonistic pleasure. After all, our oldest vineyard sites are the near-magical deposits of soil, where our pioneering winemakers first chose to plant wine grapes. The more we make wine from these “heritage vineyards,” the more we realize that our founding farmers’ instincts and wisdom were remarkably spot-on. Farmed at low yields, with the utmost care, and made with minimal handling and intervention, our wines speak directly from the ground through the vine to the glass. This allows us to peer into the natural power of the site that our ancestors saw, while revealing a winegrapes’ fullest potential and expression of character.

And here’s the kicker: isn’t it interesting that our immigrant ancestors planted so many Zinfandel and Petite Sirah vines?

Zinfandel was a grape variety of uncertain origin in those days, but they knew it was hearty, adaptive, and ideally suited to their native rugged terrain and sun-washed growing season. Zinfandel, being tightly bunched, thin of skin, and sensitive to its surrounding conditions, distinctly reflects its environment, much in the same way as Pinot noir does. And, like Pinot, it’s more vulnerable in less than ideal conditions to bunch rot, mildew, and sunburn.

We now know that Zinfandel is one of the world’s most ancient wine grapes, having been traced back nearly a millennium, to the Dalmatian Coast and Central Europe. In the 1830’s, it then immigrated to plant nurseries in New York and Boston, where it was propagated and sold as a flavorful table grape. Once Zinfandel reached California in the 1850’s, the adopted son put down reputation roots across the entire state. And, it thrived in its newfound ideal home.

Petite Sirah followed a parallel path from France’s Rhone Valley to California. This began around the 1880’s, after a botanist named Francoise Durif developed a new variety through the pollination of Peloursin with Syrah. The variety quickly became favored by California winemakers for its inky color, density, reliability, and versatility in blending. It was also commonly interplanted among Zinfandel vineyards, and spread across the state. During Prohibition, Petite Sirah survived as an excellent variety for shipping to other states for home winemaking.  In Napa Valley, Petite Sirah and Zinfandel – the unheralded European orphans – became so accepted that they accounted for nearly half of the valley’s grape production until around 1970.

Today, Zinfandel comprises about two percent of Napa Valley production, where it once held at nearly 25 percent for decades… both before and after Prohibition. Petite Sirah accounts for less than one percent. In 1976, soon after Napa Valley Cabernet Sauvignon and Chardonnay were judged as superior to their French counterparts – by French judges in the historic “Judgement in Paris” – instant market pressure mounted to replace older Zinfandel, Petite Sirah, and “mixed blacks” vineyards. Winemakers wanted more fashionable French varieties. This nearly doomed the time-honored heritage vineyards, which had performed so well for so long, as a casualty of modern day marketing. Progress was a two edged sword: a boon for the reputation of Napa Valley; but, a shame that so much of our traditional American legacy grape growing and winemaking, which had existed for a century, was lost.