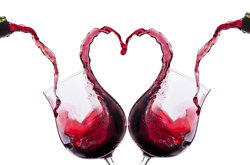 No offense, Andy. More Brewhaha and More Bluehaha rhyme. You know how story titles go, to capture people into a story. You have my utmost respect.

The Tasting Panel Magazine with Meridith May (publisher, editor) has been a true champion of Petite Sirah in the past. Today (yesterday as you read this), it was brought to my attention that editor Anthony Dias Blue has just written an editoral on Petite Sirah. As it also happened, my copy also arrived in the mail on Monday. There it was… The Tasting Panel, July 2015 issue. I had already read the story on line, so no surprises… But, to have it in my hand?

Personally, I’m not offended, because I’ve come to realize that not everyone likes all things.

So, Andy, it’s okay, you don’t have to like Petite Sirah. Maybe your dad force fed you Petite as a kid, but you just don’t want to like it? … You’ve blanked it out? It’s okay… I’ve had to blank out a lot, too, about fish. I get it.

I do have one issue, though, as pedigrees go: Petite Sirah is the son of Syrah (Peloursin is the mother). Just as you are as great as your father and mother in production, so is Petite Sirah. I would personally hate to think that we’re lesser in credibility than our dads. In fact, some of us turn out better. You wrote:

“First of all, I am offended by the fact that this garbage grape has by dint of its confected name, tried to trade off the vaunted pedigree of the noble Syrah from which some of the world’s greatest wines are made.”

Here’s how some ancient history has worked, by a father handing down to the next generation. Not to worry, I didn’t have to conjure this one up. I have it saved, because it’s part of my DNA, right down to today, and also includes the Kings of Scot:

Each one ruled, because of DNA nobility, and handing it down… regardless of the mothers’ pedigree.

Fun facts that haven’t yet been shared with you:

In closing, you say po-TA-toe, I say po-TAH-toe, and I don’t think any less of you for finally getting that off your chest. As I think about things I like and others don’t, I’m always grateful: It leaves more of that item for those of us whom enjoy what others reject… You get more foie gras and I get more Petite. Fair is fair. Be well, Andy, and enjoy whatever floats your boat in your glass of wine. Cheers.