Around the Wine World in Eight Days – Chile 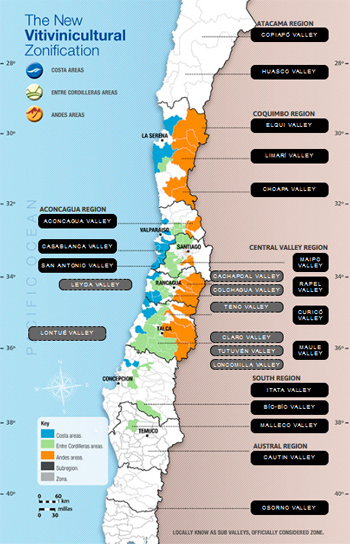 Today is the second day of Around the Wine World in Eight Days, so today is Chile!

Top 10 Things about Chile That Intrigue Me

In the closing years of the 19th century Don Melchor de Concha y Toro discovered that his most treasured wines had been pilfered from the “casillero” (cellar) beneath his family home. To discourage further theft, the enterprising Don spread a rumor that his deepest, darkest cellars were haunted by the devil. Today, the original Concha y Toro family estate, complete with its Devil’s Cellar, is Chile’s leading tourist destination!

The wines may have been stored in hell, but they are made in heaven. With its steady sunshine, cooling winds and pestilence-free vineyards, Chile is a winemaker’s dream. Add to this a winemaking tradition based on French grape varieties and winemaking techniques, and you have a winning combination. High quality wines can be made inexpensively, which Concha y Toro successfully demonstrated with the release of its Casillero el Diablo wines in 1963.

I’m a huge fan. On our last trip to Puerto Rico, it was the Casillero del Diablo label that I recognized and purchased, without a second thought at a wine shop in Luisa. The wines are always consistently delicious, as a value wine import that I trust.

Unleashing my inner devil, as suggested by Concha y Toro

A blend of 85 percent Sauvignon Blanc, 10 percent of Chardonnay, and 5 percent Gewürztraminer. After fermentation, the Reserva Casillero del Diablo white wine was aged sur lie, for at least eight months in stainless steel. It is a deliciously crisp wine (Sauvignon Blanc traits) – with flavors of citrus, peach and honeysuckle – that’s s well rounded wine (Chardonnay traits), with a floral accent (Gewürztraminer coming through). It was a really enticing wine, and I’d love it with a melon fruit salad. 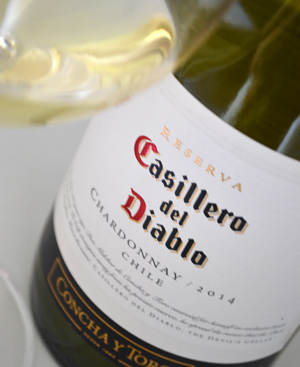 It’s 100 percent Chardonnay, and my first thought was “flawless”… The flavors, the texture, the citrusy lemon expressed its true character, with a refreshing finish on the 100 degree day when I tasted it. And, most important is that I enjoy tasting wines for evaluation at room temp. As a result, this wine was a bit warmer than my usual 70 degrees; however, if there was any problem with this wine, I would have found it instantly. Instead I found a wine that I could enjoy any time, any place. I would love this one with squash, while others would say fish dishes. (I can’t say “fish dishes,” as I’m allergic)… More for you, “don’t cry for me, Chile.” 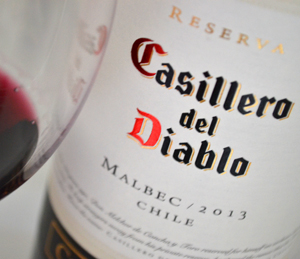 Malbec was one of the first red wines that I learned about, outside of the usual comfort zone. I was working with The Hambrecht Wine Group (no longer in business) and our CEO Ed Schrufer. Ed went to South America to buy wine, had it shipped to Healdsburg, and the juice went under our Grove Street label. This was my first introduction, and honestly, it was a wine I could enjoy without much thought. I never quite got other Bordeaux varieties, the way I instantly got this one. “Malbec, what the heck,” I remember thinking. “You’re so easy!” So, now I’m trying this Chilean version…  Smokey, chalky, flint… and then the dark cherries come to the dance floor. Talk about delivering. It’s been years since I’ve backed up into Malbec, in a serious way. But, as I wrote earlier, Concha y Toro wines are consistently delicious and now so is the variety of Malbec on my palate. I’m never disappointed with this brand. Try it with cheesecake. That’s what I’m doing right now.